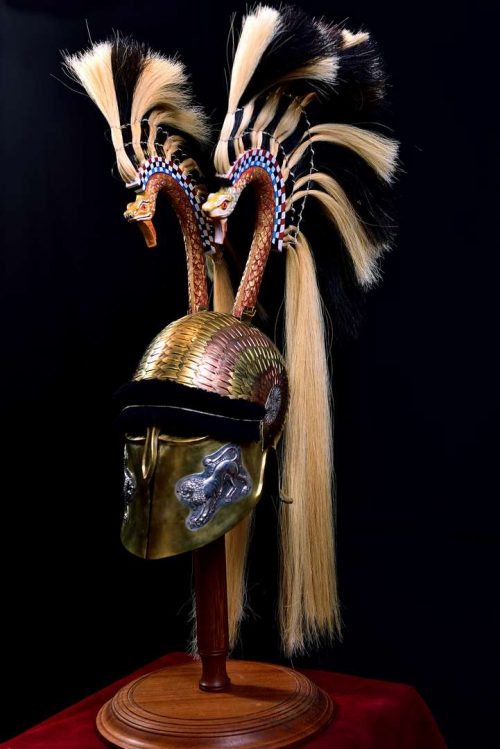 The Corinthian helmet is the most iconic defensive gear of classical antiquity. Pictorial
representations during the Archaic and Classical period are ubiquitous and encountered in every
means of artistic expression: sculptures, vase paintings (especially portrayed on Corinthian vases),
frescoes, literature etc. Corinthian helmets begin to make their appearance during to first quarter of
the 7th century BC and continue to develop for the next three hundred years until they go out of
fashion after the collapse of the conservative Greek city states at the end of the 5th century BC.
During the Persian Wars (490-479 BC) its popularity was extremely high and thousands were made
all over the Greek world. The name derives from the city of Corinth (despite the fact that its actual
origin is ascribed to the local workshops of the city of Argos).

The historian Herodotus considers it already as something “antiquated” (Hrd, Histories. iv 180) a
fact which is indicative of its long usage during the past centuries. The Corinthian helmet, as with
the muscled cuirass, should be considered as an indigenous Greek metal working innovation
gradually becoming the most widespread characteristic type of Greek defence gear. It was
commonly raised by a single piece of bronze sheet hammered onto a stone dome although during its
early evolution stages (early Archaic period, proto-Corinthian helmets) more complicated
cast/soldering techniques were applied as well. Covering the entire face and leaving visible only the
eyes and mouth it was designed to provide the maximum protection for a warrior’s head within a
very cohesive battle formation – the phalanx.

The main technical characteristics of the Corinthian helm are the curved profile of the top, the
pointed nasal, the almond-like eye openings and the broad protruding cheek covers (paragnathides).
To protect the warrior’s skull the interior was well padded with wool, sponges, leather and fabric. It
was usually popular to add decorative stylized crests (lophos) of colorful horsehair plumes often
running vertically from front to back, a practice which accorded them a more distinct identity and
individuality.

During its latter stages of development more elaborate lighter versions were produced with the
shape extended to resemble a gigantic human phallus. Given the Corinthian helmets’ iconic status
as the signature of the hoplite phalanges which faced the huge Persian invading armies at Marathon,
Thermopylae and Plataiae, it is not surprising that the goddess Athena and the famous Athenian
politician Pericles were frequently depicted wearing the same helm perched over the forehead.
Statistically the Corinthian helmet was depicted on more heroic sculptures than any other
contemporary helmet because the Greeks inevitably associated it with the glorious past. It should
also be stressed that a custom-made Corinthian helmet for a young man in Greek culture was not a
mundane affair as would be the purchasing of any piece of equipment, but signified the passage to
manhood and his acceptance as a civilian of the demos when it was fitted for his first time. We have
to presume, therefore, that helmets occupied a place of honour in a hoplite’s home.

Description
Most probably the most intriguing version of Corinthian helmet is the scaled helmet. It was usually
depicted on red figure pottery paintings and is actually a modified model of the original, its major
difference being the covering of the dome with hundreds of tiny scales. Scaling in Greek school of
armouring was a widely accepted practice and we can spot scaled guards almost everywhere in
many typologies and arrangements. Artisans integrated this specific element to a helmet’s overall
design creating a luxurious and extravagant distinctive identity.

The reconstructed helmet has been based on a vase painting (dated to the second half of the 5th
century BC) and retains all the technical features of a Corinthian helmet mentioned above. The
mask has been hammered from a bronze sheet, the dome has been covered with 520 bronze and
copper pointed, ridged scales directly riveted to the top producing an astonishing optical result. A
detachable double snake-like crest with natural horse hairs (black and white) have been fastened on
the top. The main bodies of the dragons have been carved out of wood and painted with natural
colours, while the snake heads are copies of the Python heads from the surviving Delphi Tripod. A
silver lion (repousse-made,based on “Chimera of Arezzo”) is riveted to each cheek, a woolen black fringe covers the front of the
helmet and finally, a silver ornament has been attached to the center of the overlapping scales. All
the inner surfaces hare padded with wool and linen.

It is a valuable handmade artifact which incorporates a range of traditional techniques and precious
natural materials combining high-end classical aesthetics, luxury and prestige. 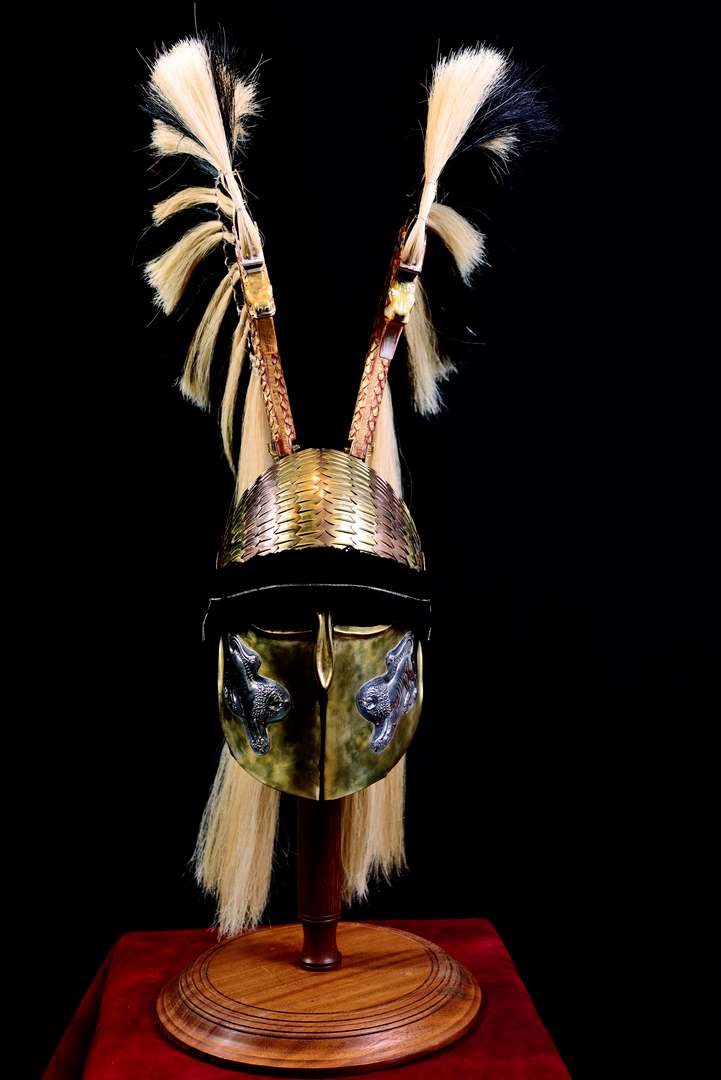 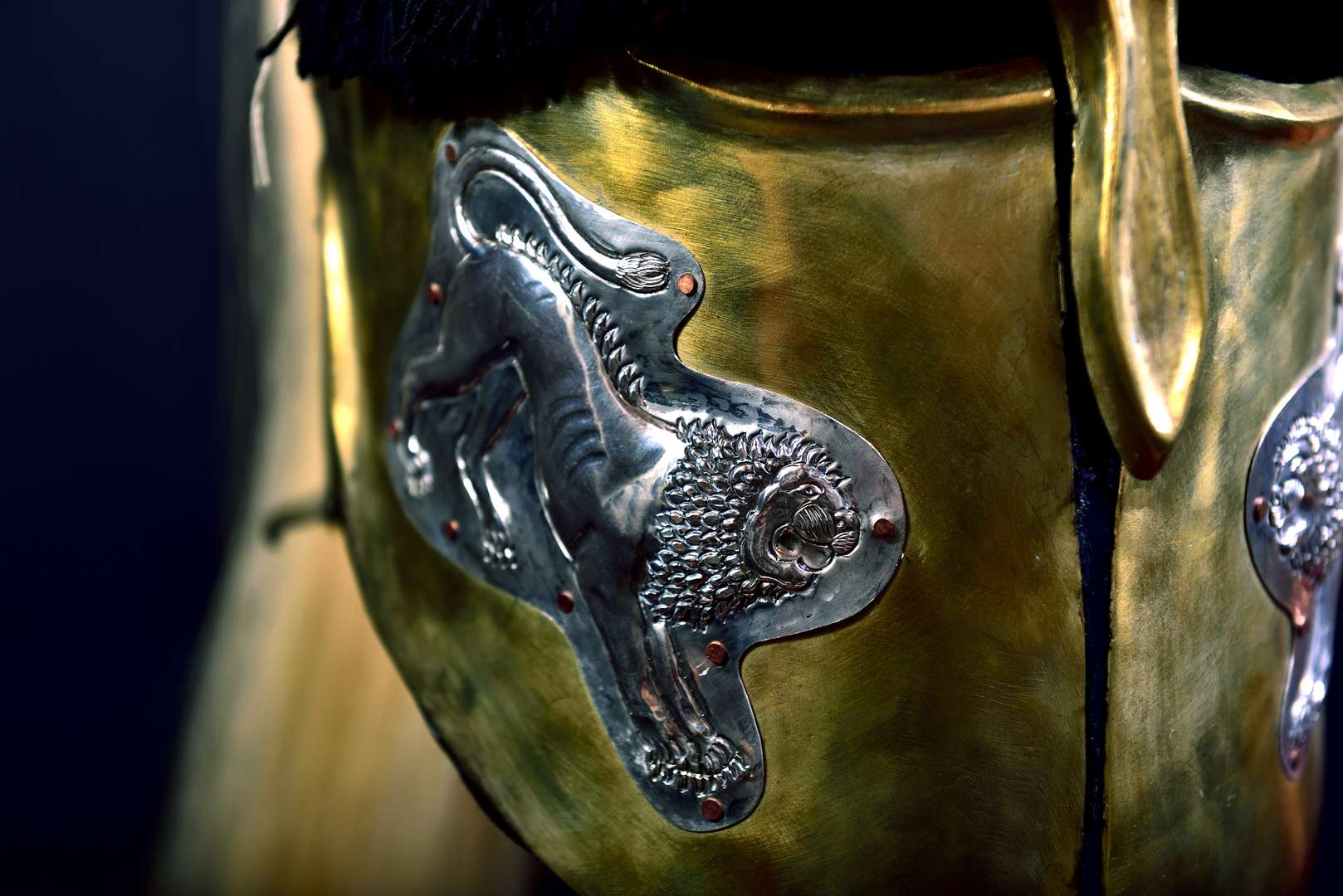 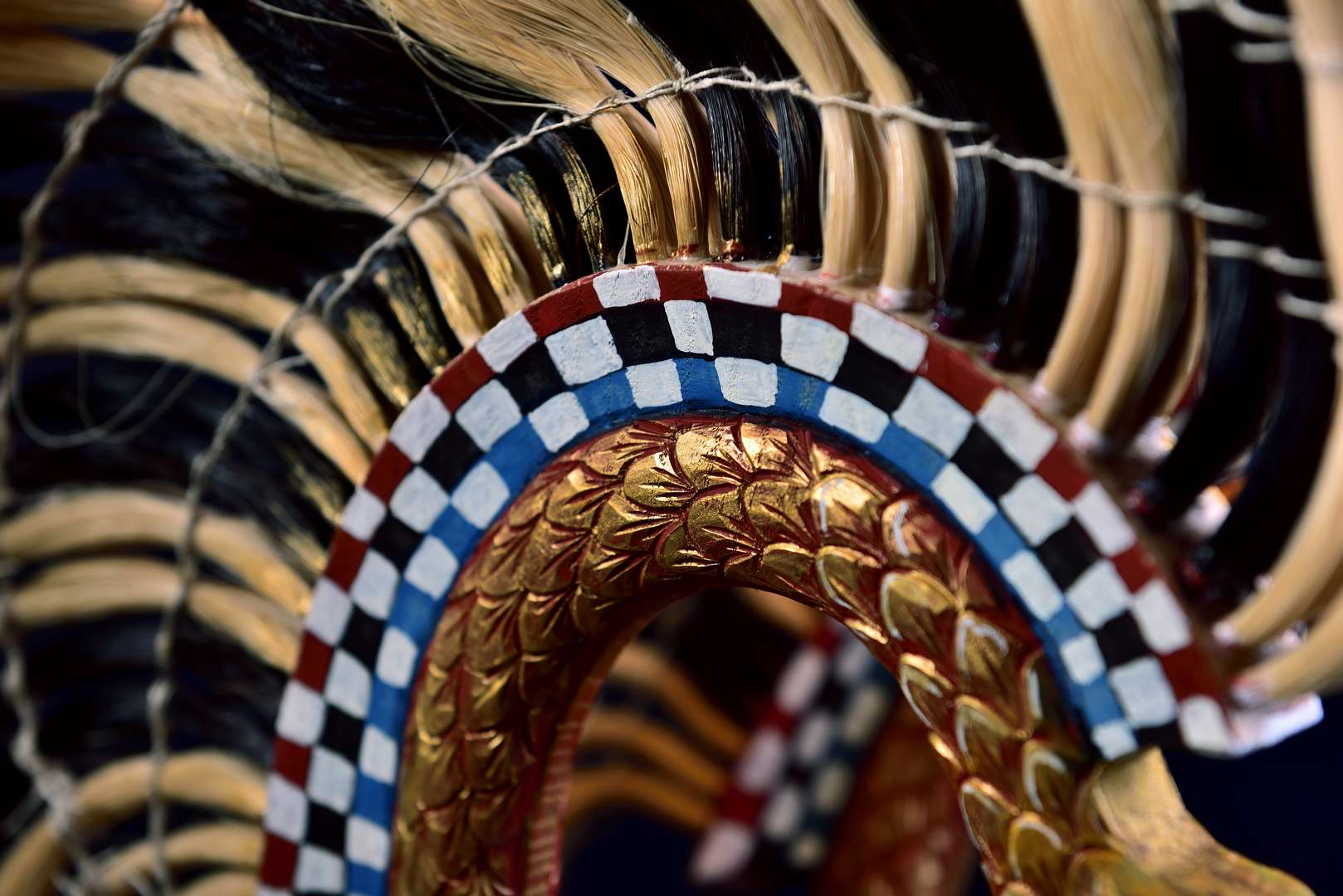 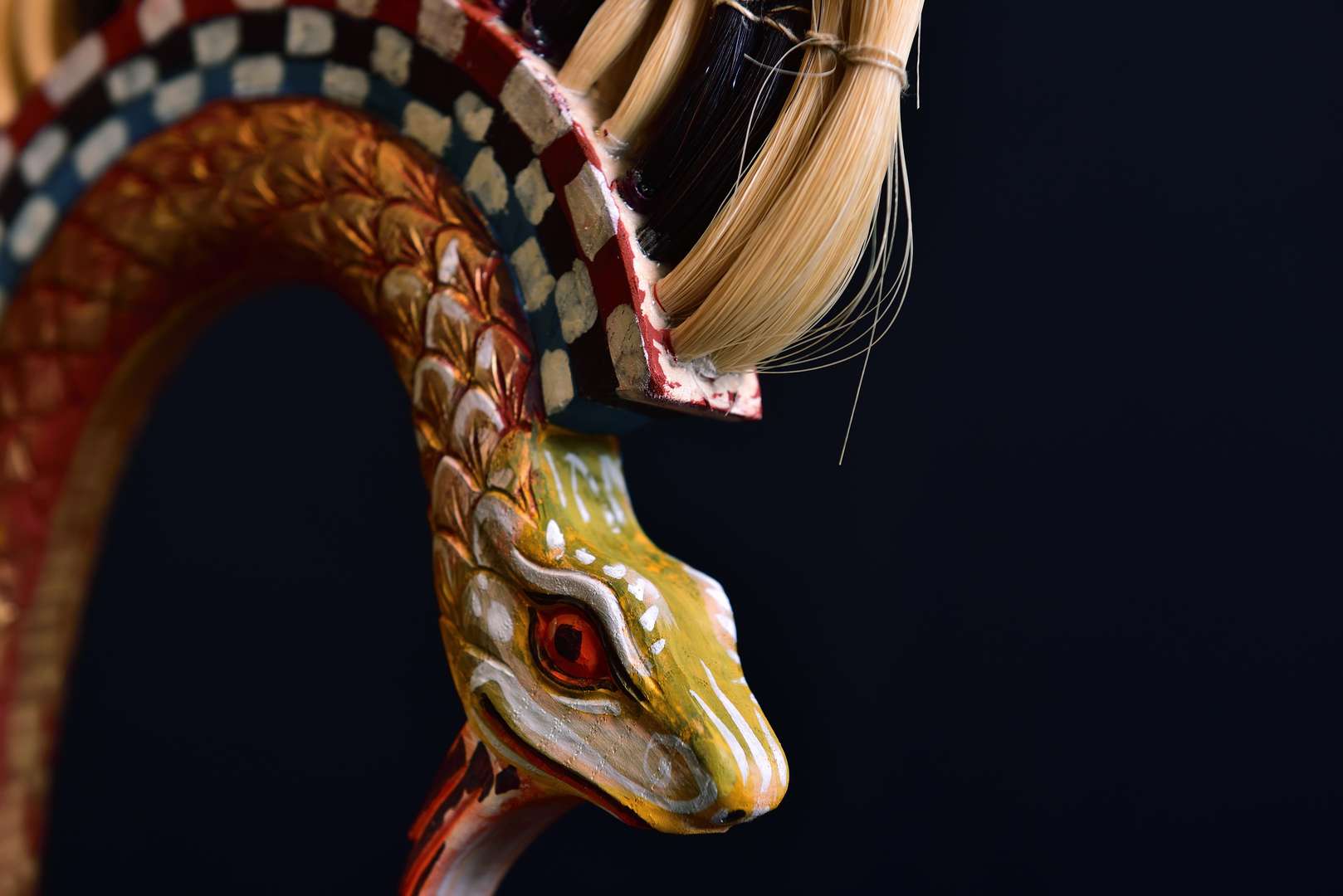 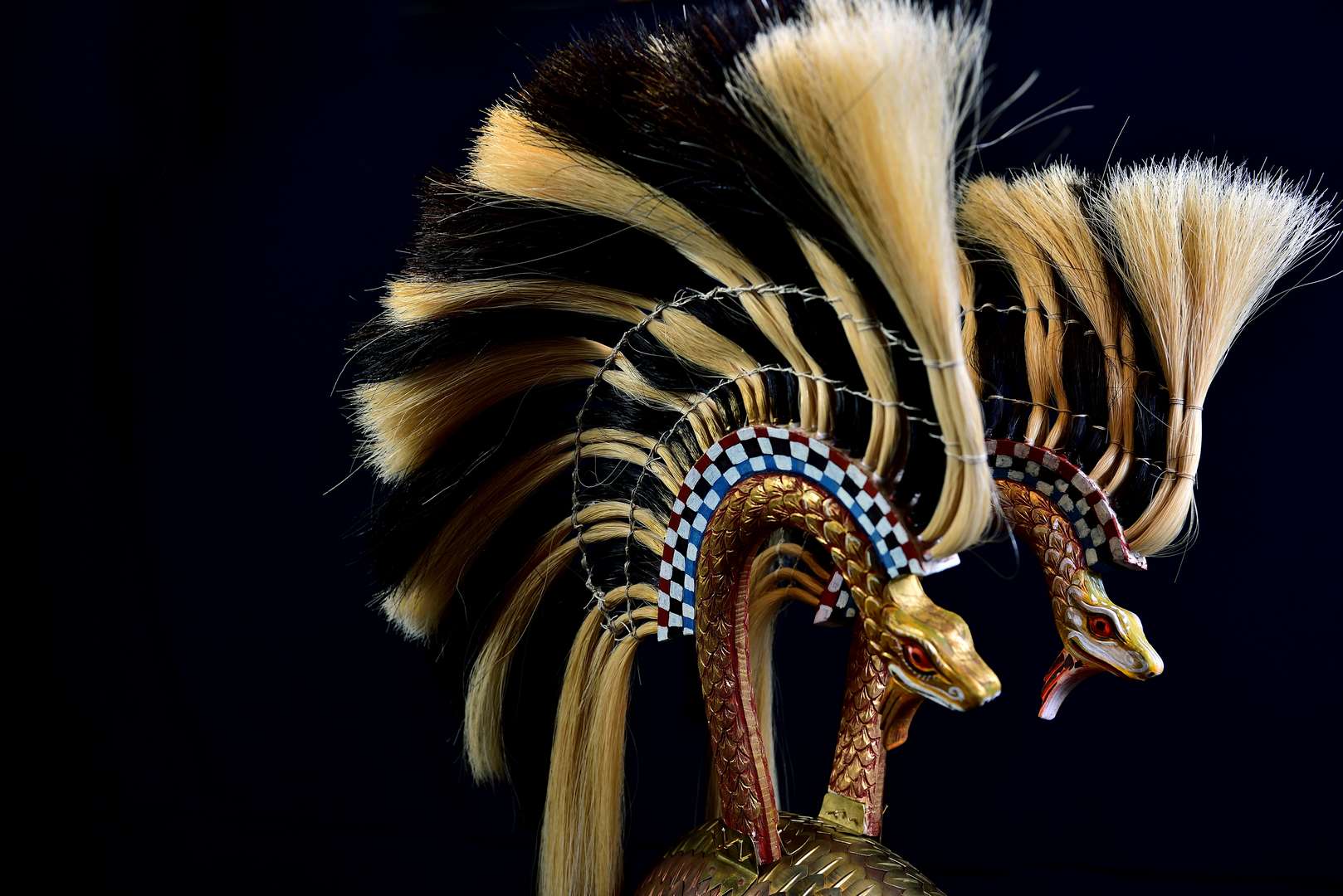 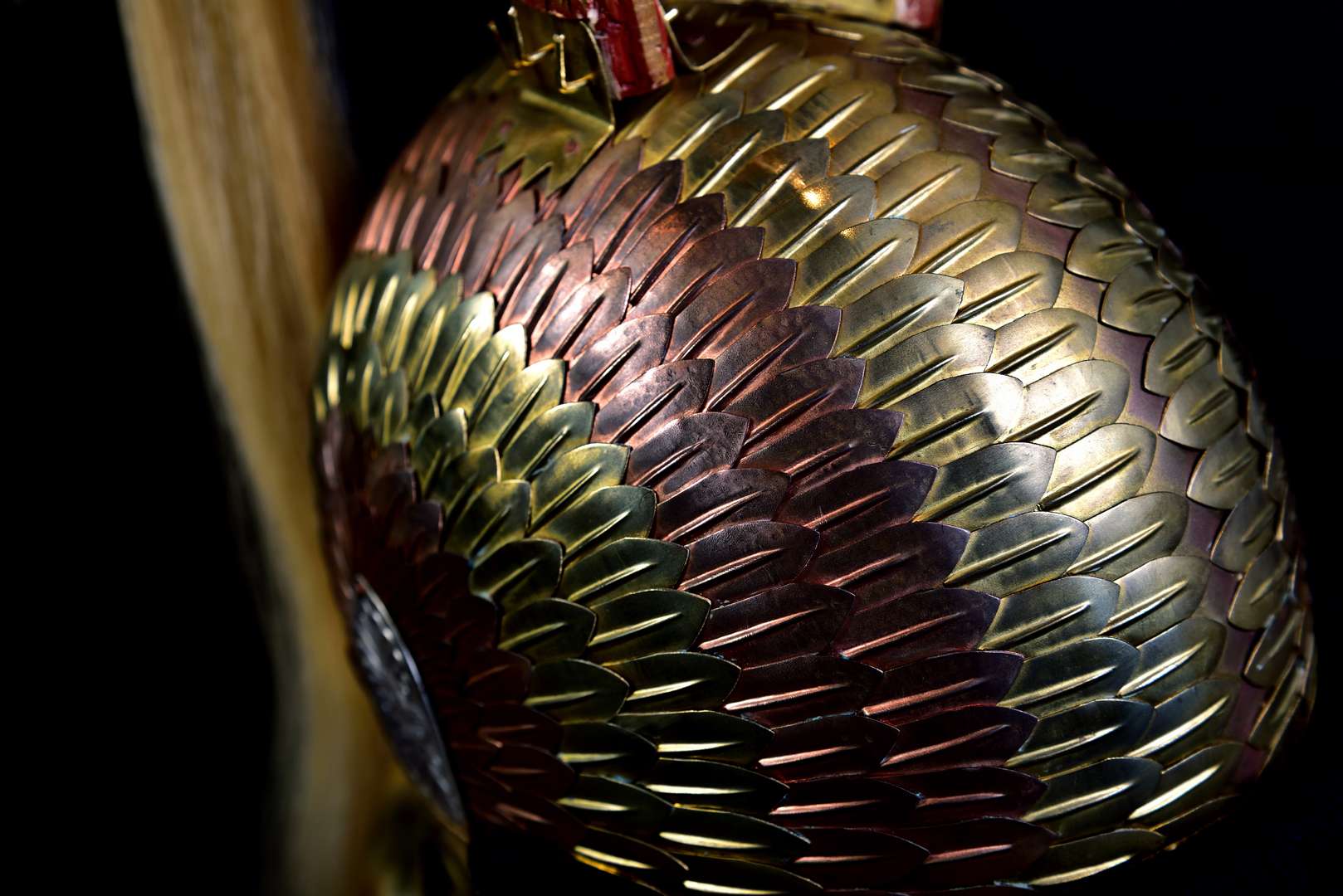 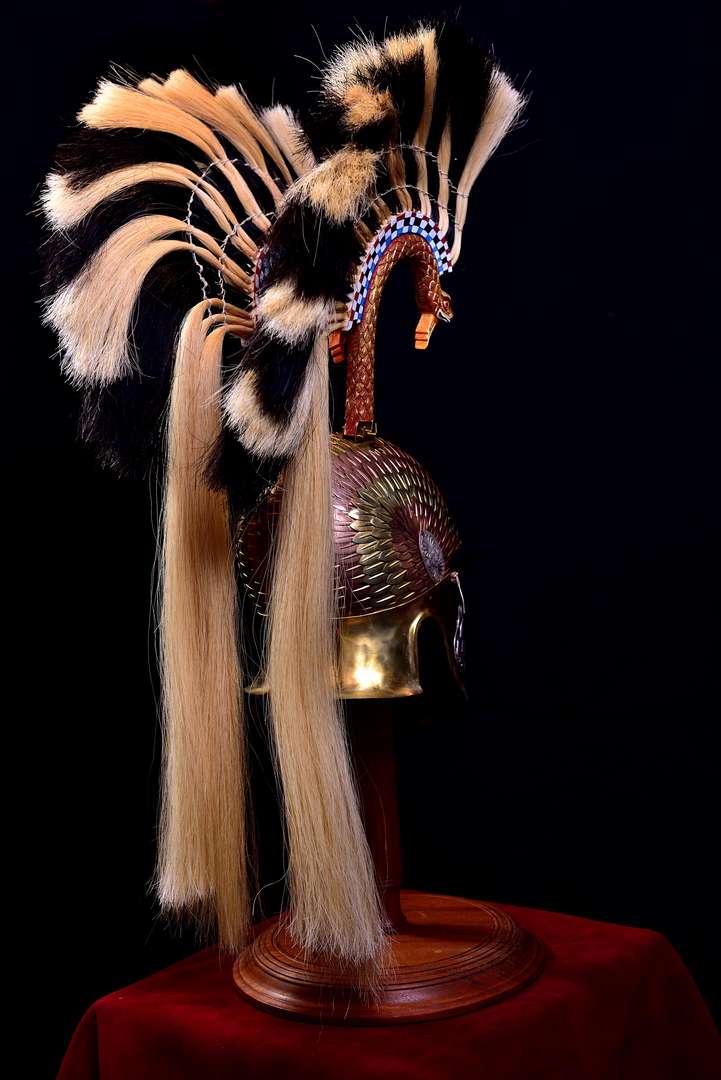 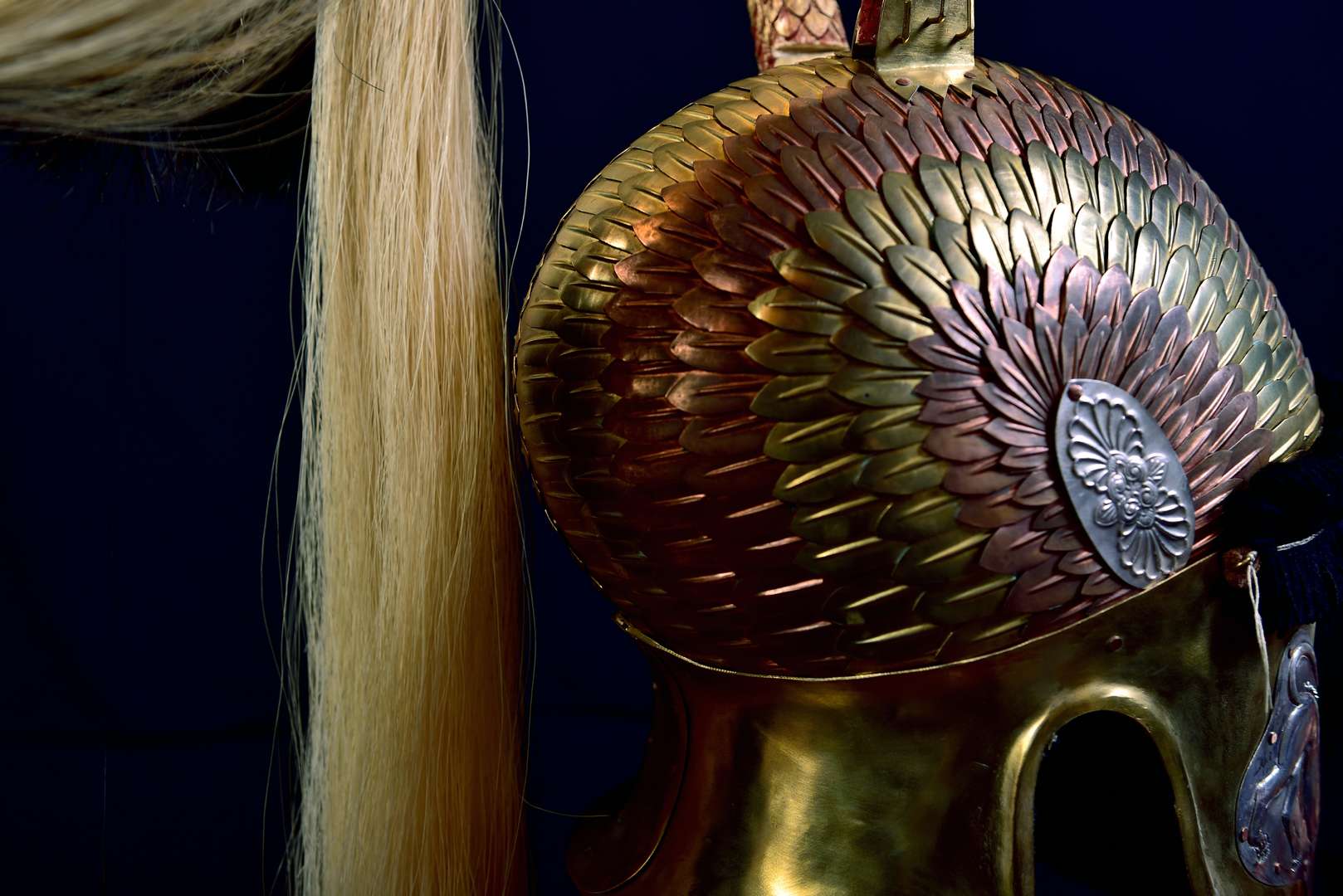 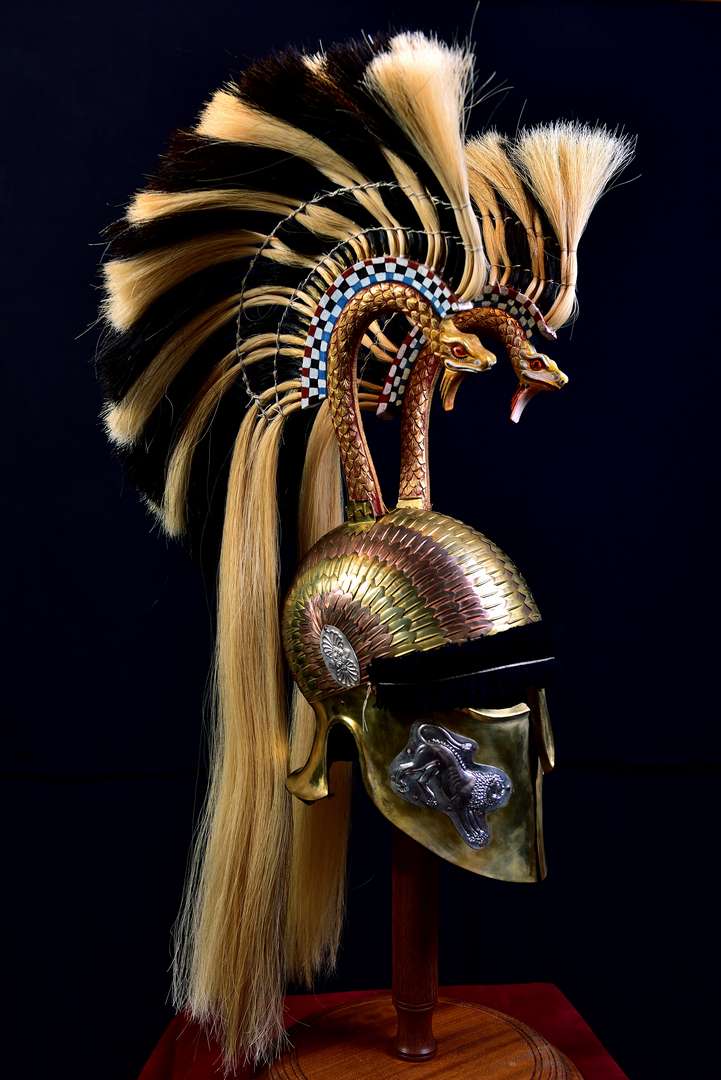 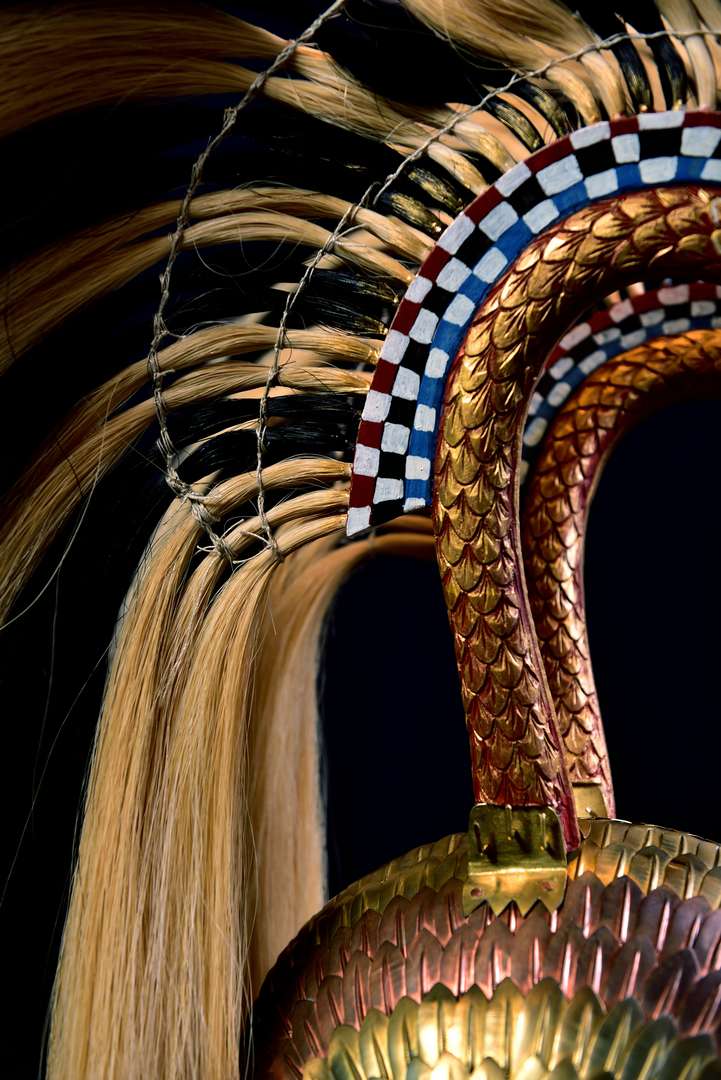 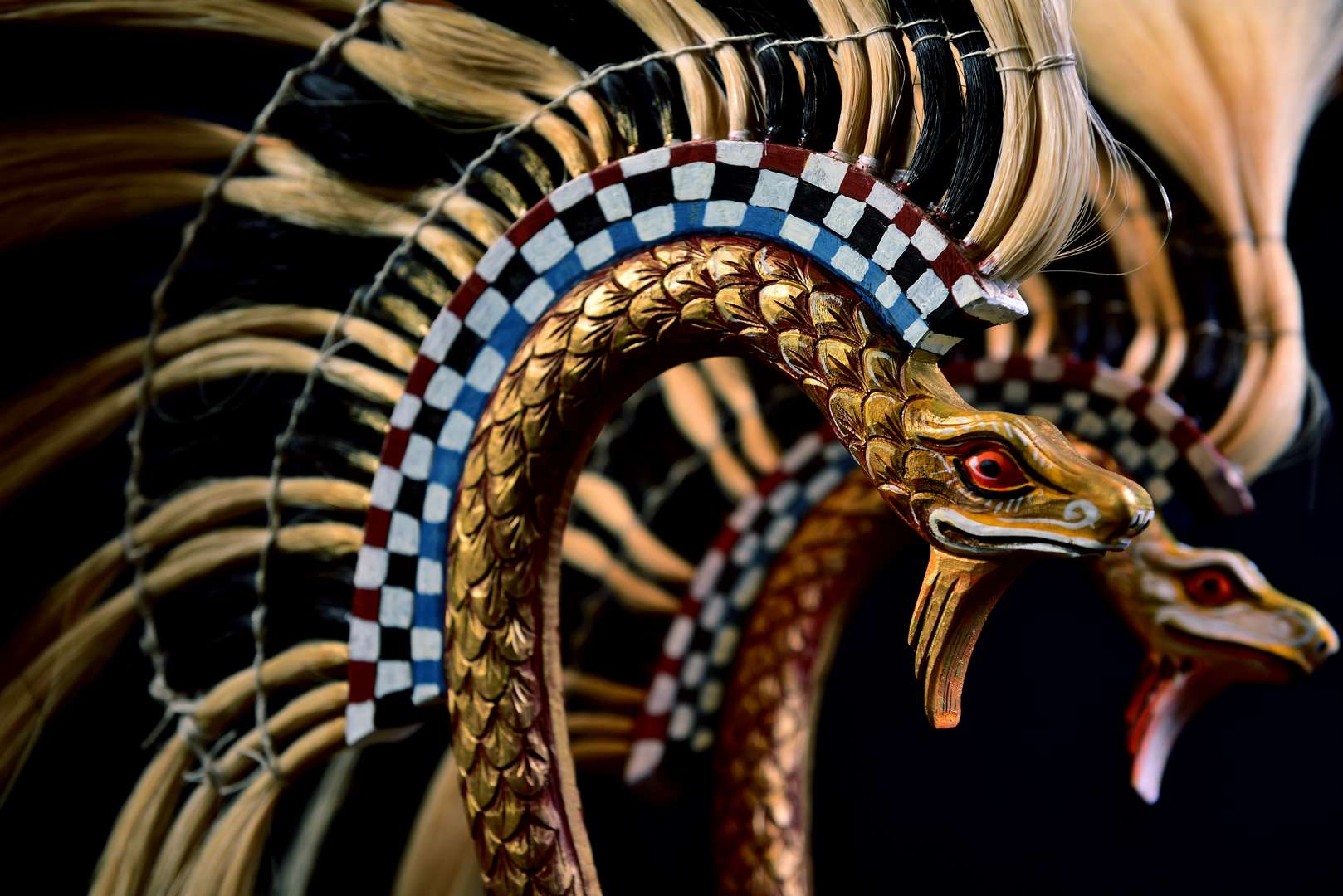 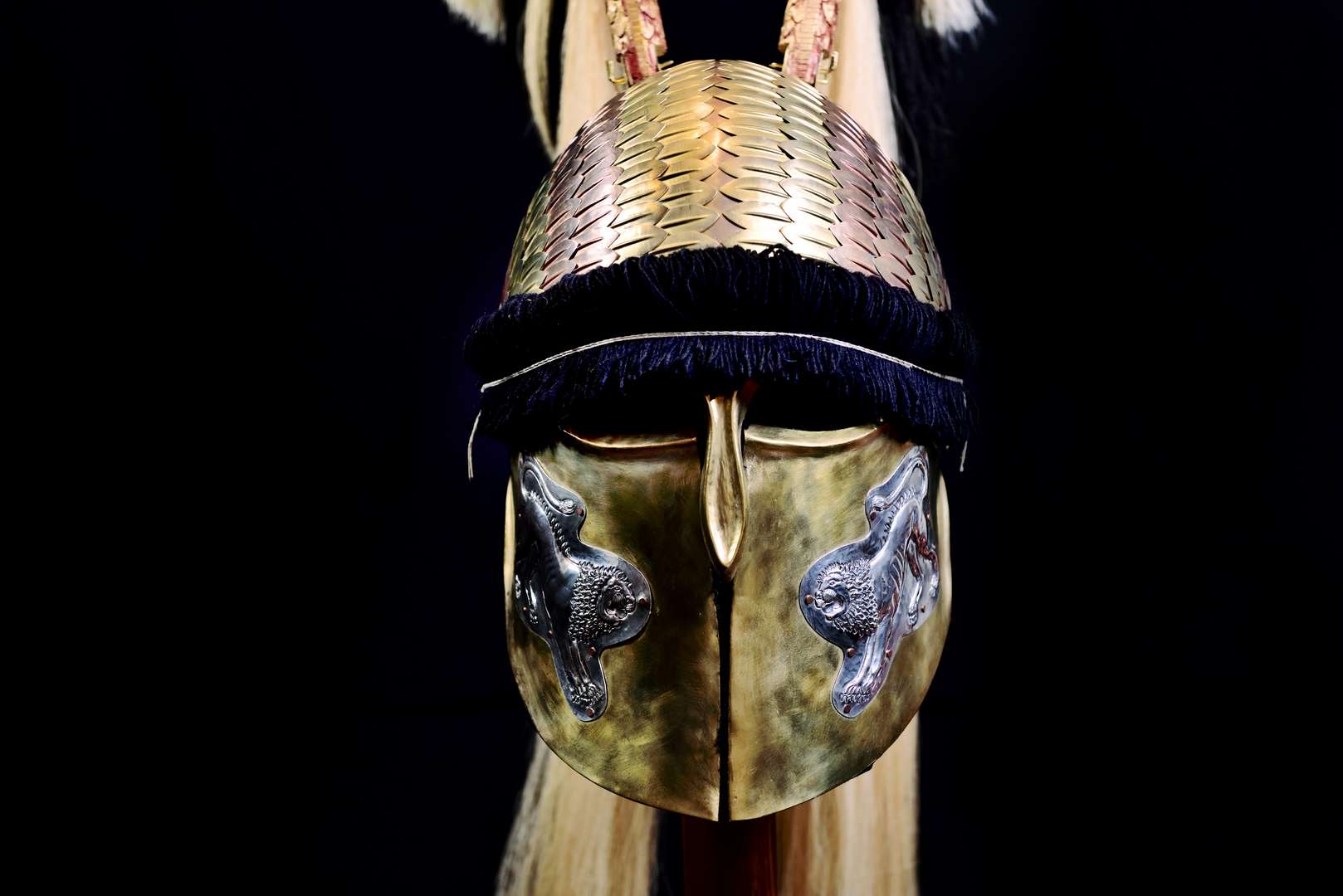 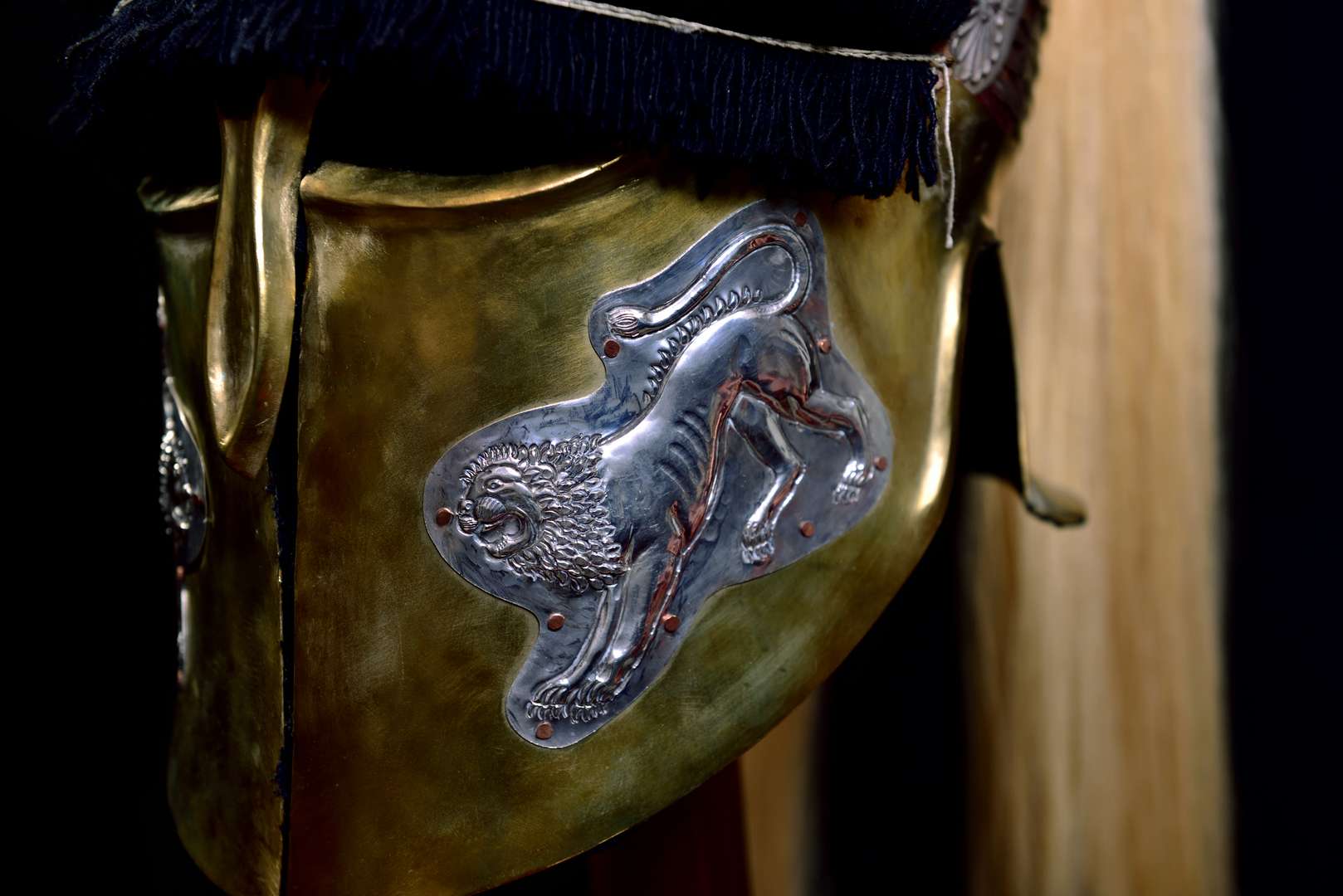 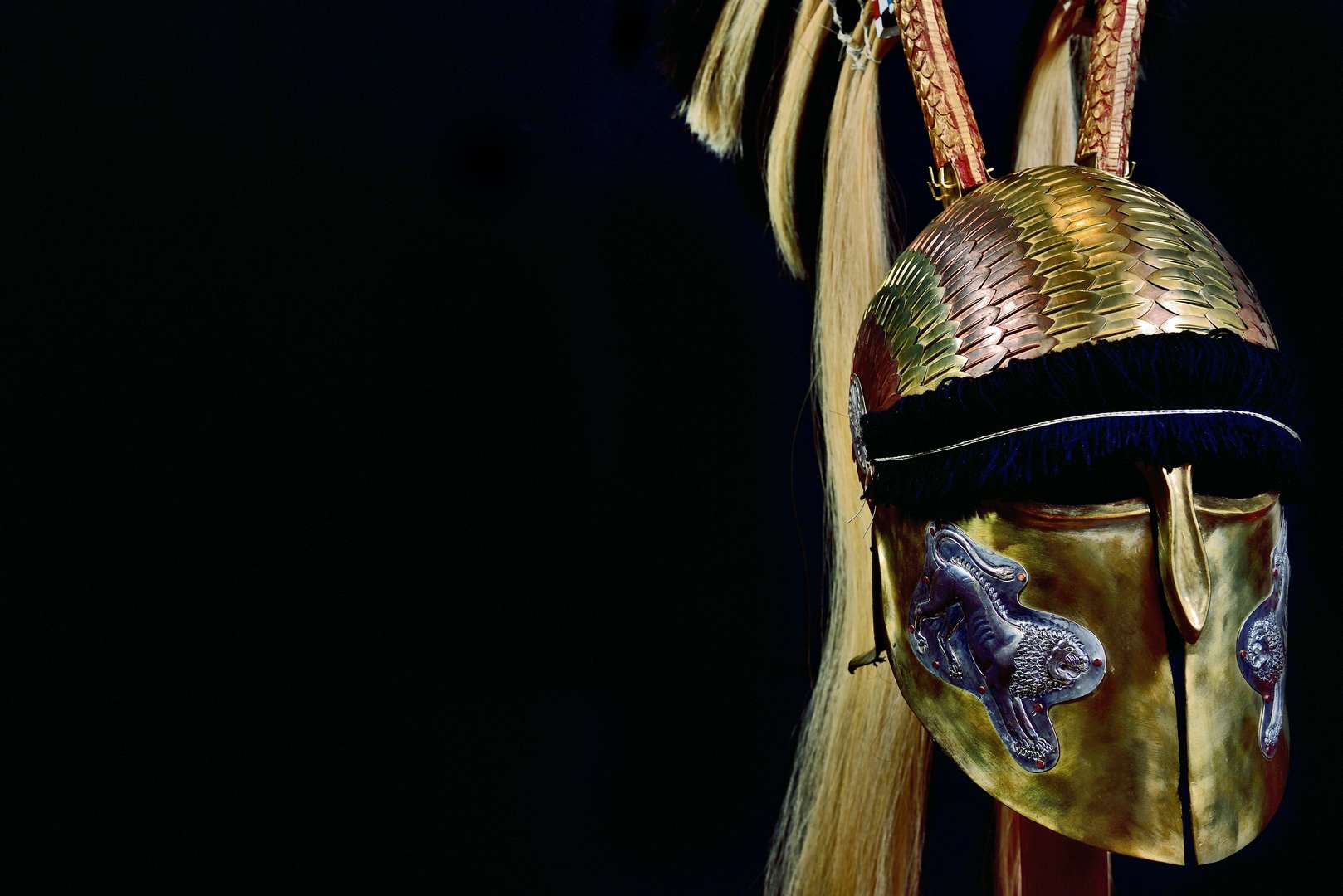 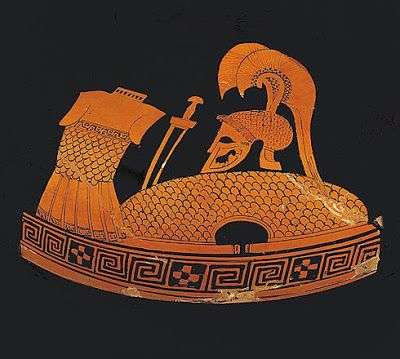 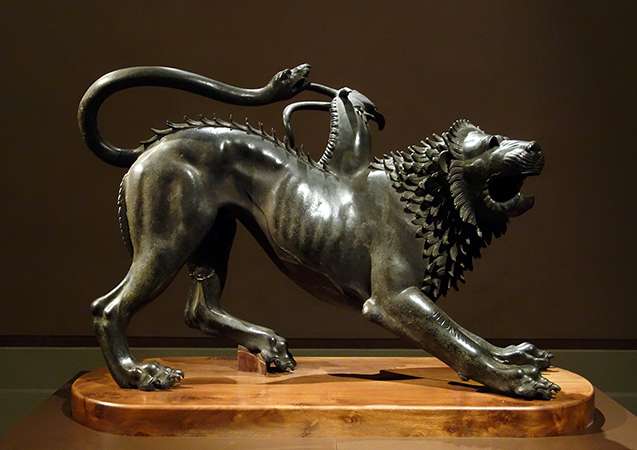 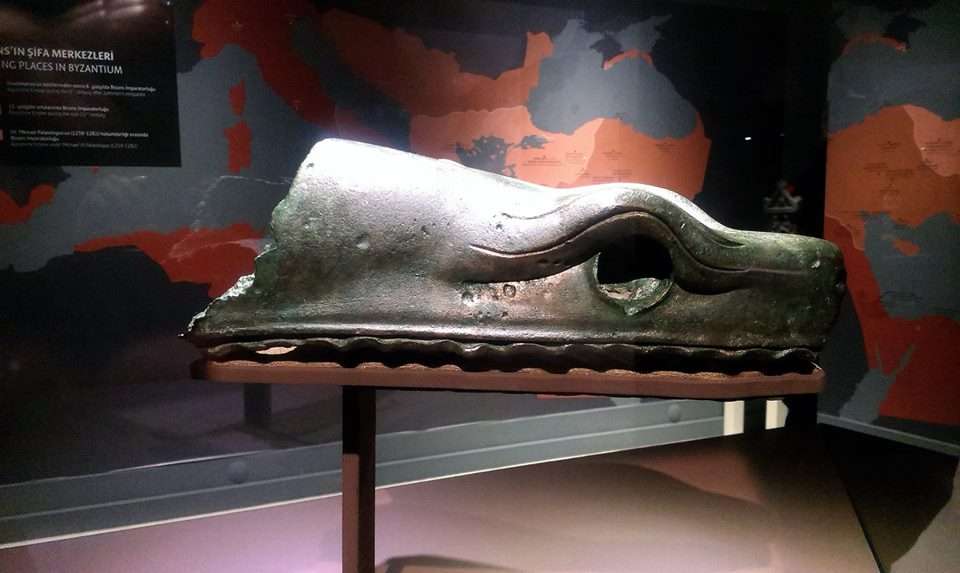