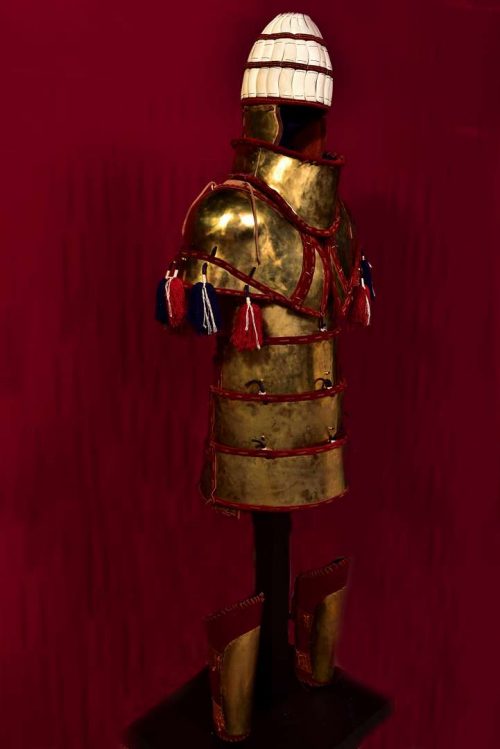 Ιt was unearthed back to 1960 by the Greco-Swedish expedition at the territory of Dendra village at Argolida region (Peloponnese , Greece), it was part of the findings that included the Mycenean Tomb number 12 (the final resting place of a local Warlord). A full first-hand analytical description of this very item can be found on the report «The Cuirass Tomb and other Finds at Dendra. Part I: The Chamber Tombs. (Studies in Mediterranean Archaeology, iv.)» conducted by P.Astrom head of the Swedish Archaeological team that undertaken the expedition. Today the armor is being displayed at Nauplion Archaeological museum.

The armor should have been constructed around the middle of the 15th century BC (Late Helladic II period) and it is being consisted exclusively by bronze plates, in total 18 pieces of different sizes and shapes (full plate armor). Primarily, the armor reveals an extremely high technological level and the existence of a high skilled technicians able to undertake such difficult and complicated projects. Such sophisticated metalworking achievements presuppose a full development social, military and commercial conditions, a flourished society full of energy and innovations.

Τhe reconstructor of the armor, Dimitrios Katsikis, was based on P.Astrom drawings /description and by personal observations of the authentic items at Nauplion Museum. All the bronze particle were formed by traditional techniques (annealing) using hammers, anvils and of course source of fire for softening the metal surfaces. The materials were used: linen textile, leather and bronze sheets (1,2- 1 mm thickness).

The main torso consisted of two bronze plates shaped in a rough anatomical way in order to create a tube like “capsule” able to enclose the torso of the hoplite. The anatomy of the plates is far remoted from the Archaic or Classical cannon, no one artistic elements tends to reveal the major and minor athletic men anatomical elements eg. Breast outlines, packs etc. The locking mechanism that hold together the two plates is being based on Π-like bronze made receptors (kind of hinges) located in the shoulder area (two pairs) and to side abdomen area (another three pairs). The inner surface has been covered with thick woolen padding. Worth notable elements a) The bigger diameter of the right arm opening probably not by accident in a case of a powerful right hand warlord 2) The shorted height of the frontal thorax in comparison with the longest back plate. The reason is apparently practical, this sophisticated technical specification enables a much more easy frontal bending in the battle field, increasing the freedom of moves.

The pauldrons are extremely sophisticated defensive gears seeing from architectonical and practical point of view. Despite their enormous volumes are fully operational and enable a full range of shoulder and arm moves (they hug entirely the upper torso area). Each of them is being consisted by four components, the major curved part and three minor bronze sections attached to the biggest shoulder part with bronze rings (thoracic and rear crescent-like extension) and leather thongs (horizontal narrow extension sheet).The pauldrons are being attached to the main torso through ring -leather cords mechanism.

The neck area is being protected by a bronze circular collar with anatomical base attached to the upper part of the torso leaving no gaps between them, creating a solid continuation /extension of torso. The stabilization of the collar is being achieved with bronze wires. It’s inner part has been covered with woolen and textile materials for safety reasons (protection from skin damages).

The protection of groin and upper legs/ thighs (to the level of knees) is being achieved by three pairs of horizontal rectangular overlapping bands of bronze sheets, connected together with a system of thick leather laces (4 mm round holes for laces “hunging” in regular distances are obvious at plates). The independent motion of the front and back metallic “curtains” ensure a high level of mobility and freedom of moves. Worth noting sophisticated architectural details is the bigger diameter of the frontal curtain (in order to facilitated the narrow back curtain) and its shorter height (easier frontal walking/marching).

Should be mentioned that all the rims of the bronze plates bearing holes (2 mm in diameter) in order to facilitated folded leather, stitched along the edges with leather cords. This reveals the high level of detailed work and the tender of the manufacture toward the creation of a luxurious product.

The Dendra armor set is being completed with one pair of open type bronze greaves and one pair for the forearms protection. Both defensive gears are made of one piece bronze sheet and are being settled on place with laces. Apparently, the metallic components are attached to a thick layer of linen something that enable a safe and secure application to fleshy human tissues.

The helmet has not been yet reconstructed mainly due to luck of boar tasks. Instead an another organic domed helmet (In Mycenean style) has replaced it. The helmet is of a conical shape, is being consisted by leather walls rested to a bronze skeleton. Small round bronze bosses have been attached to its external surfaces reinforcing its defensive character.

The “Dendra” armor can be considered as a unique Universal monument of human civilization and human technological progress. It is a “window” to the heart of Mycenean world, a Megalithic moving lethal structure that reflects the passion of the people of that era for perfection, for domination, for progress. 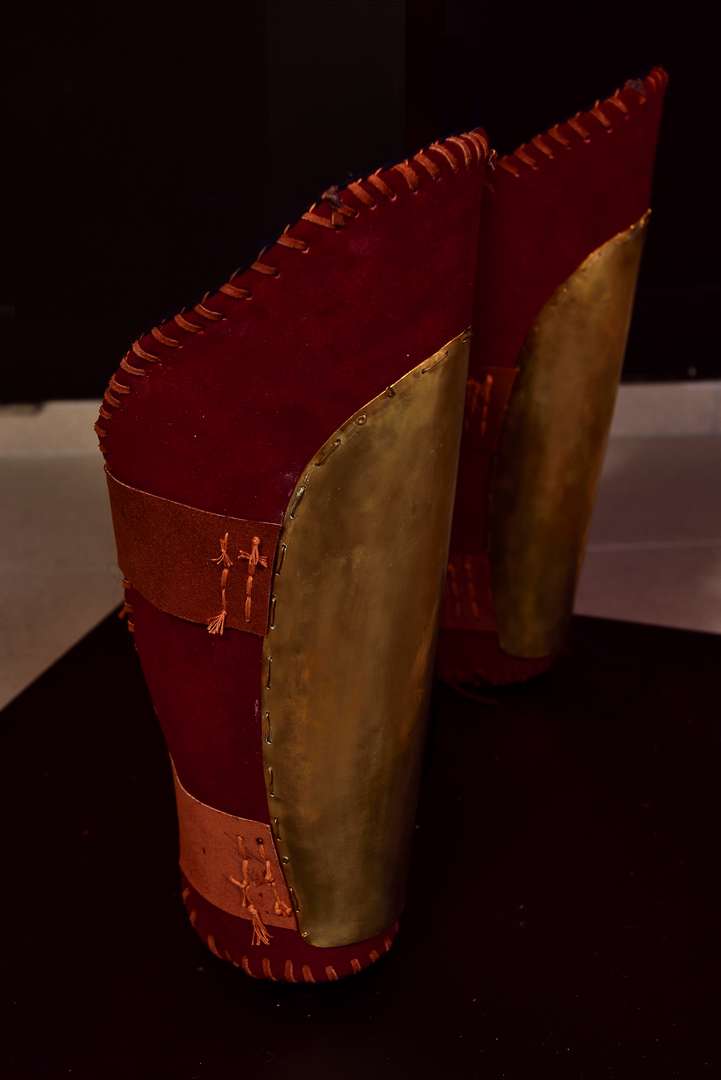 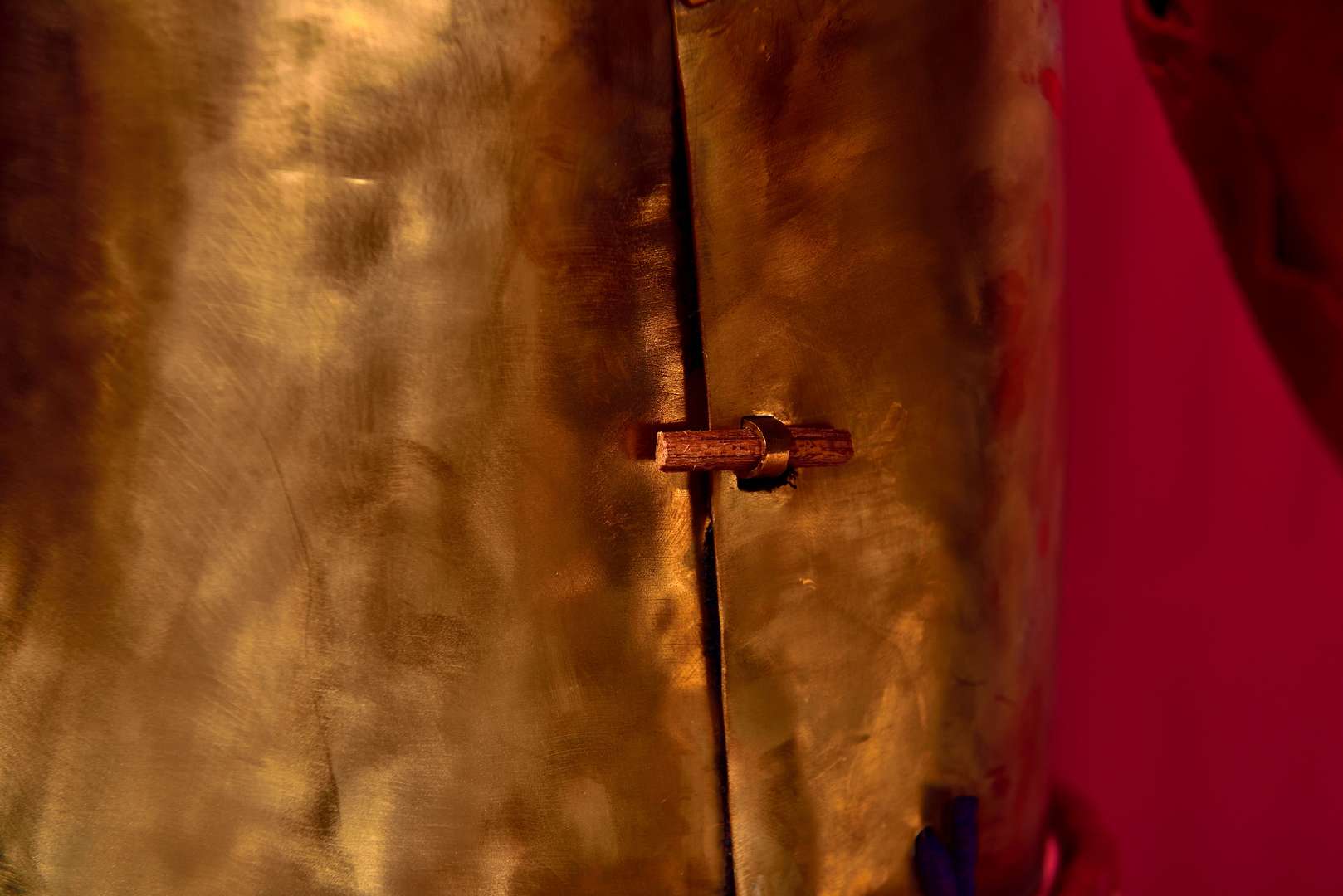 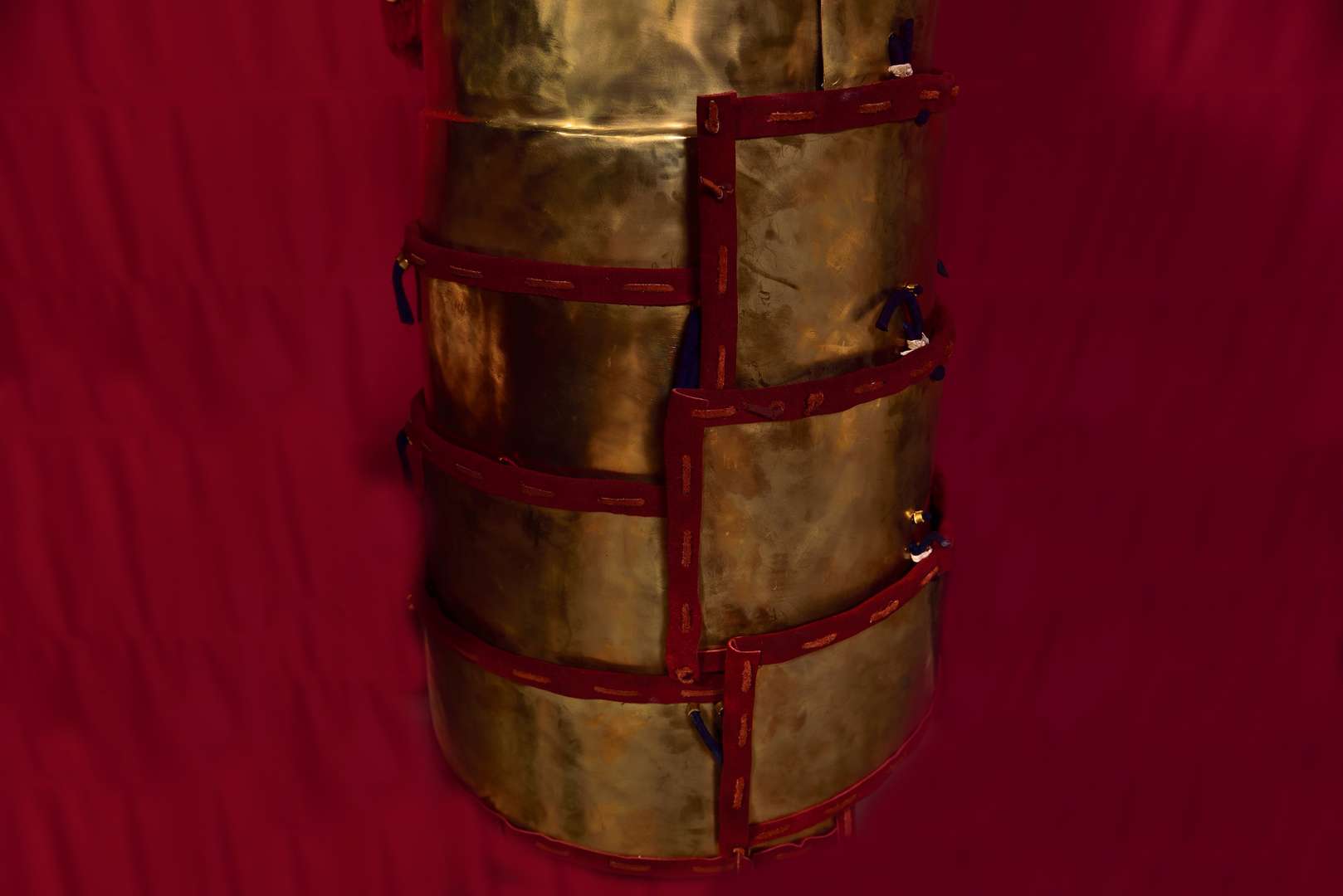 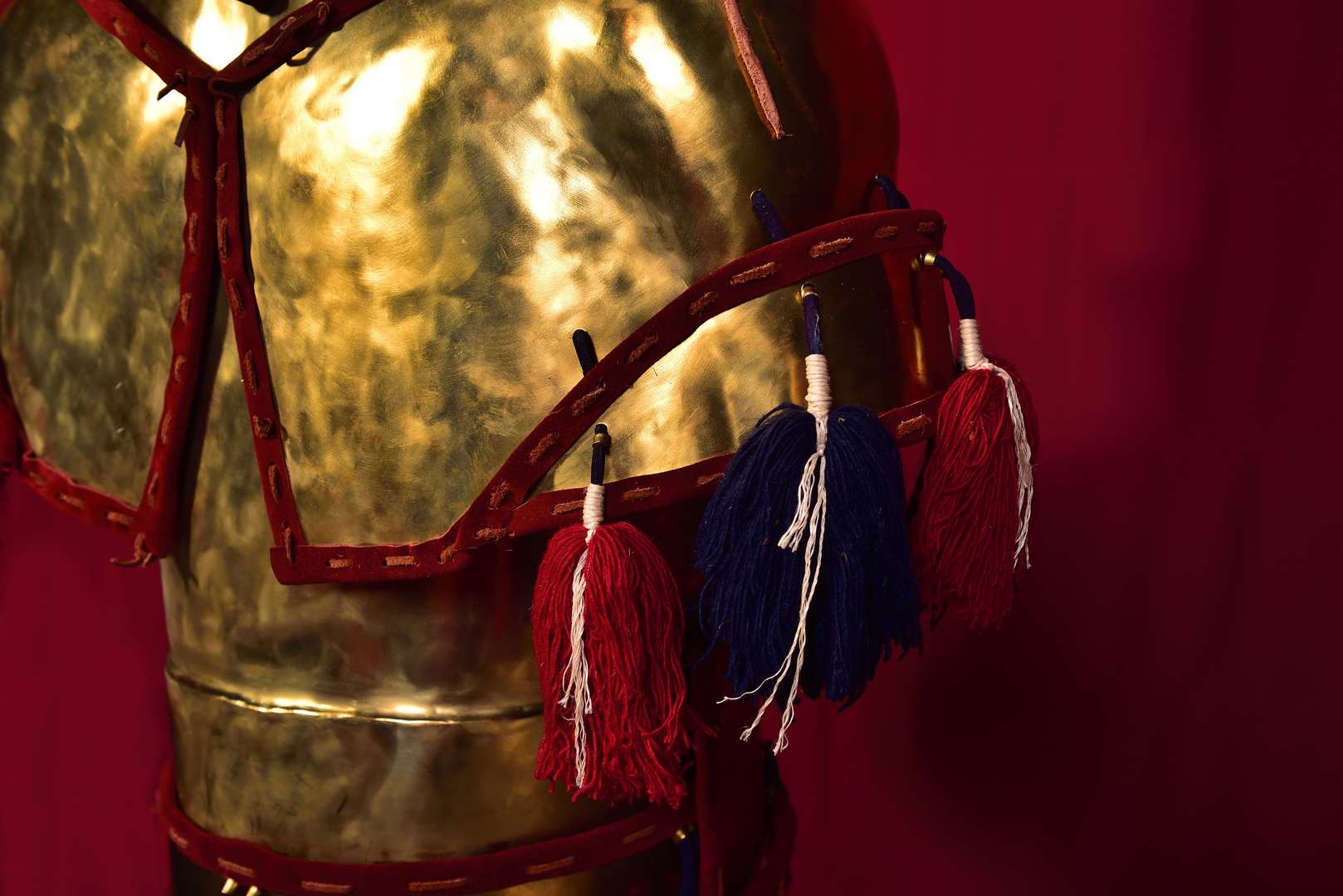 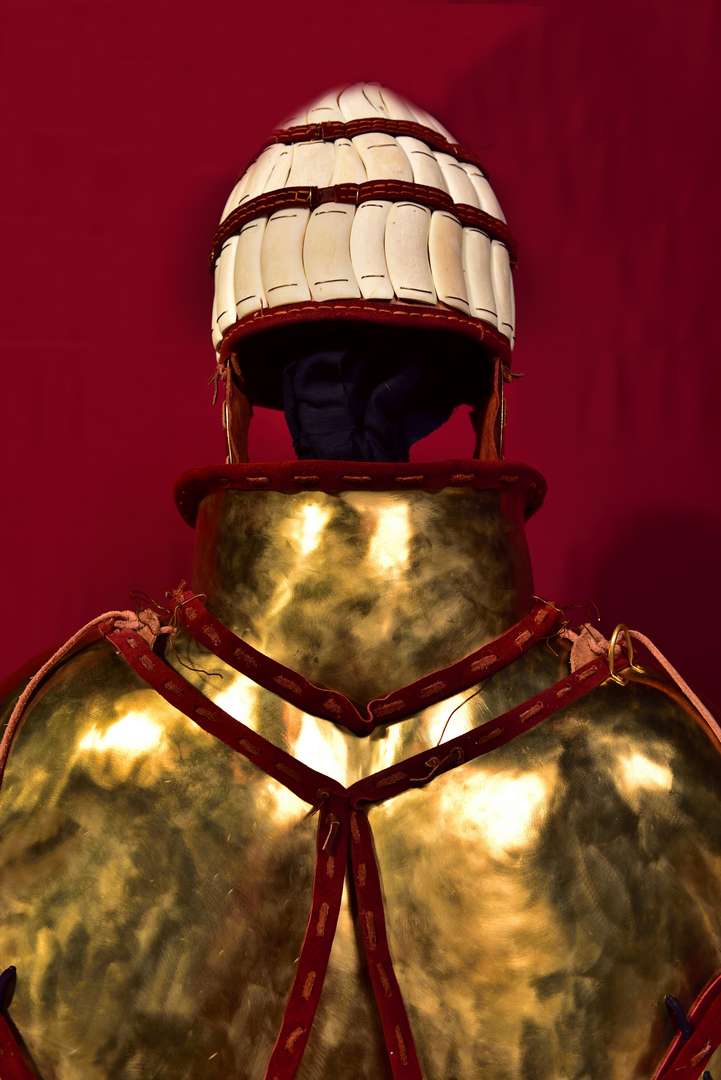 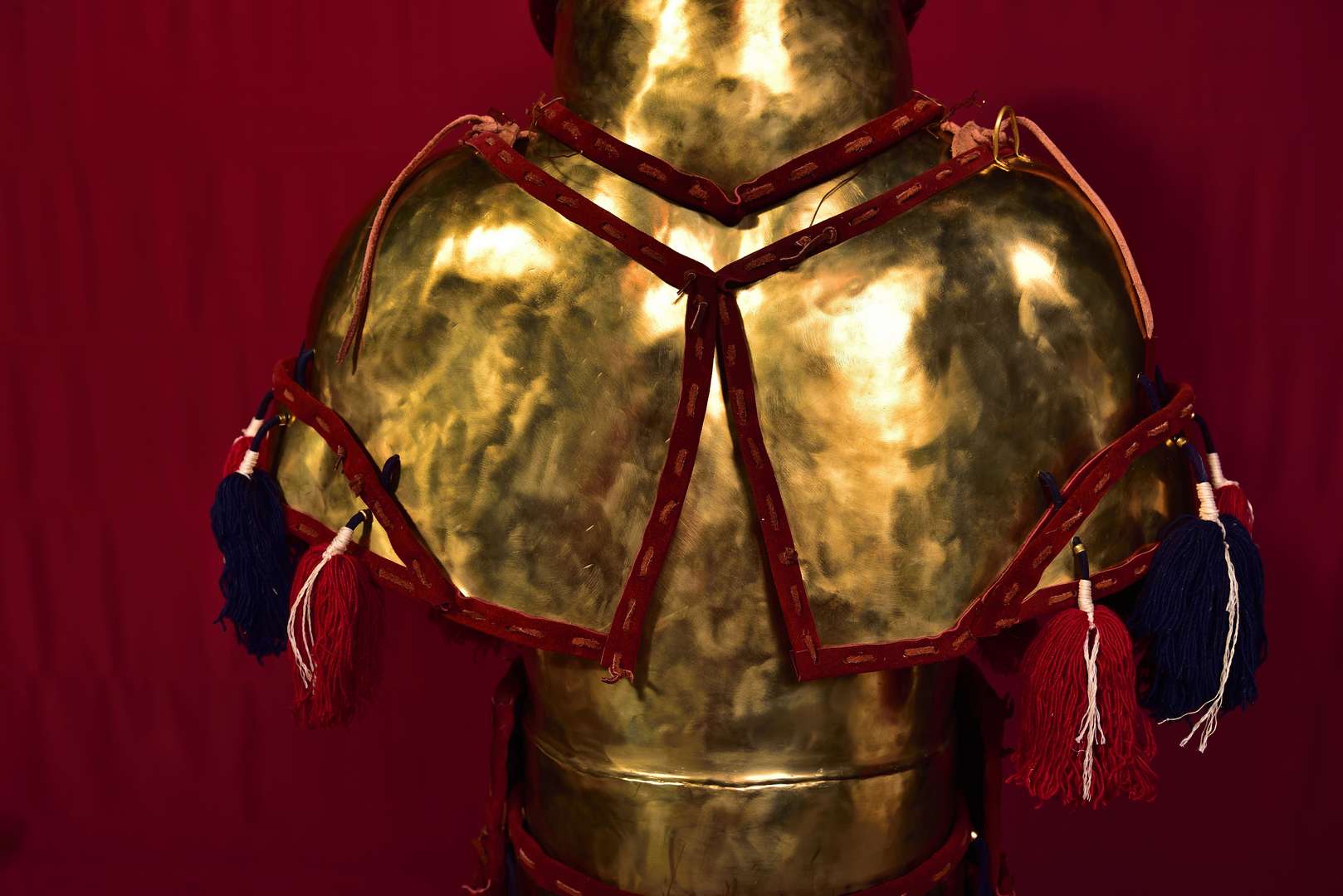 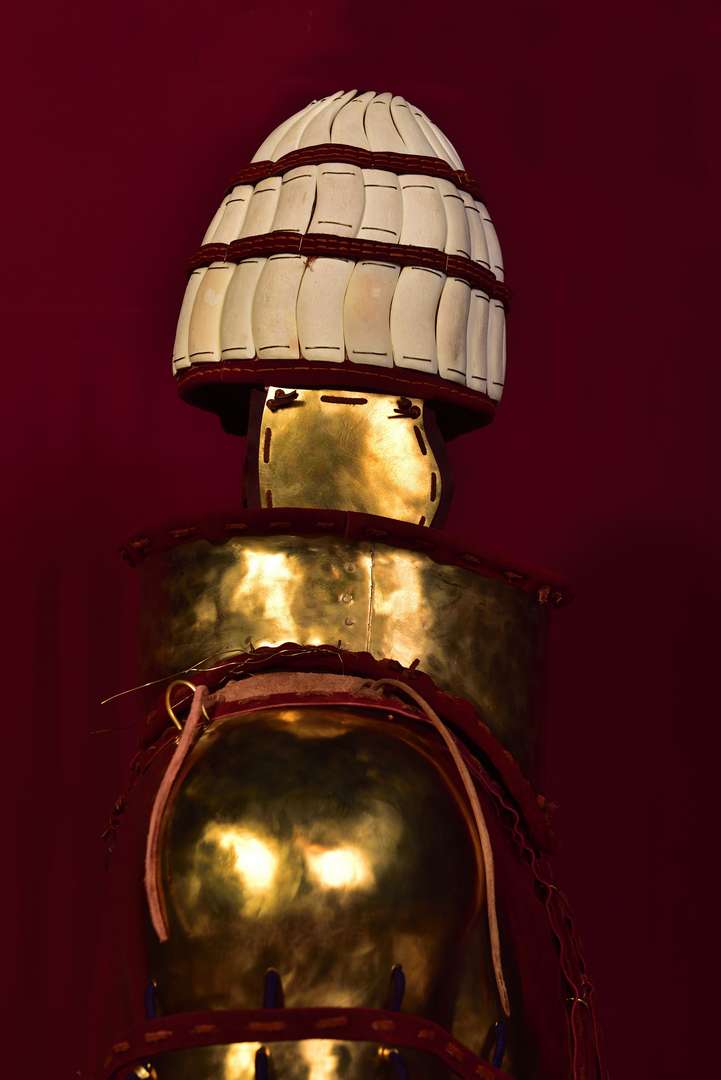 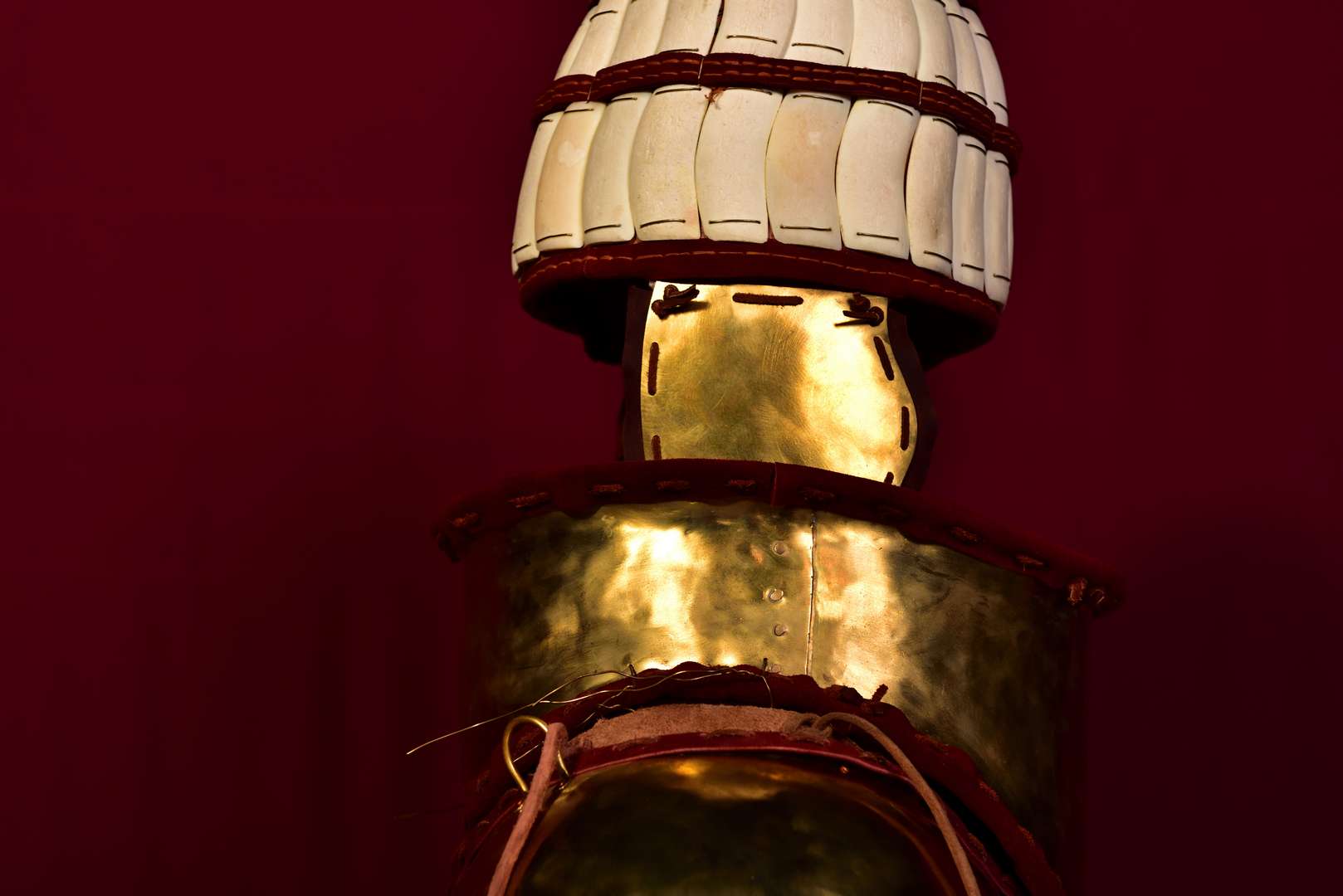 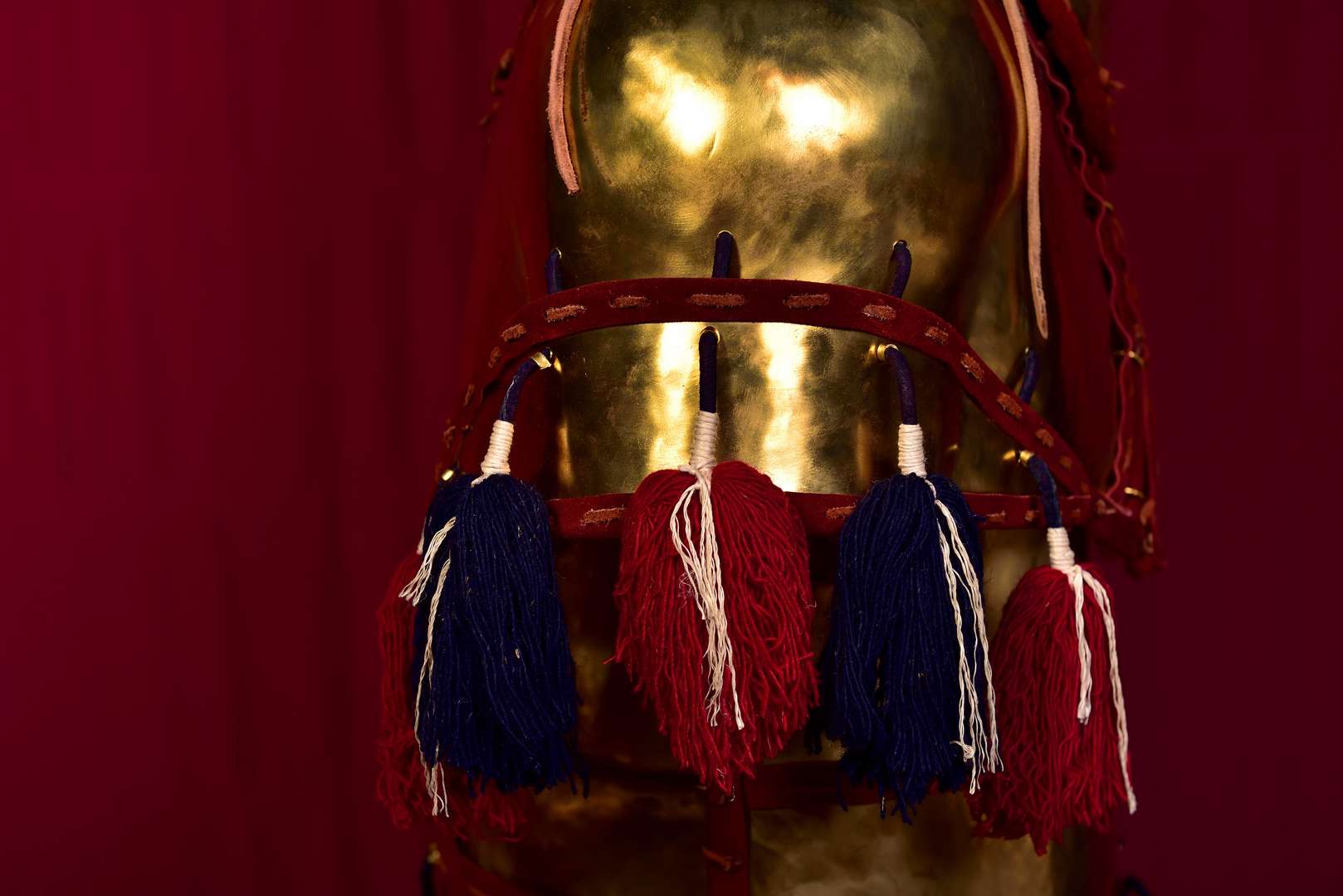 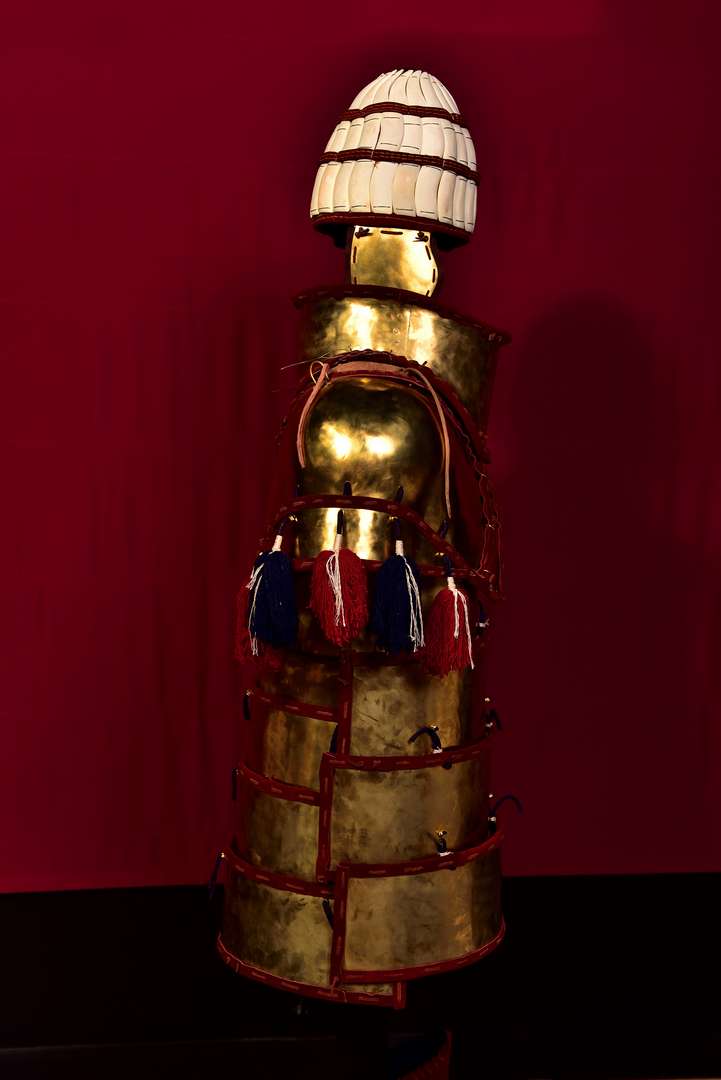 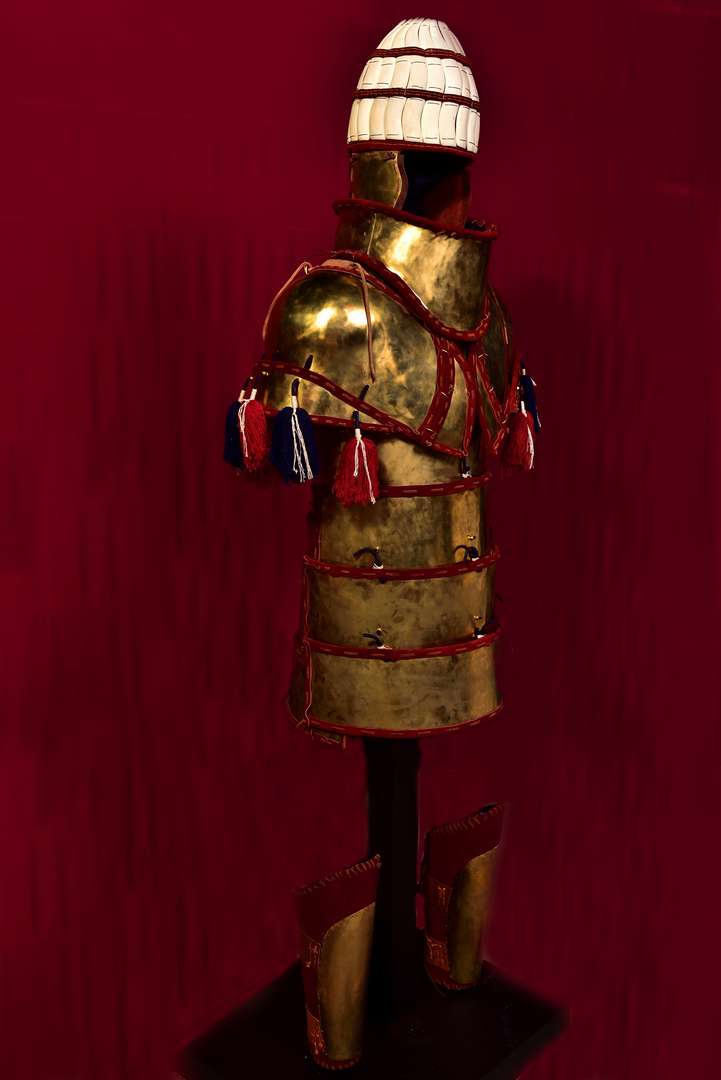 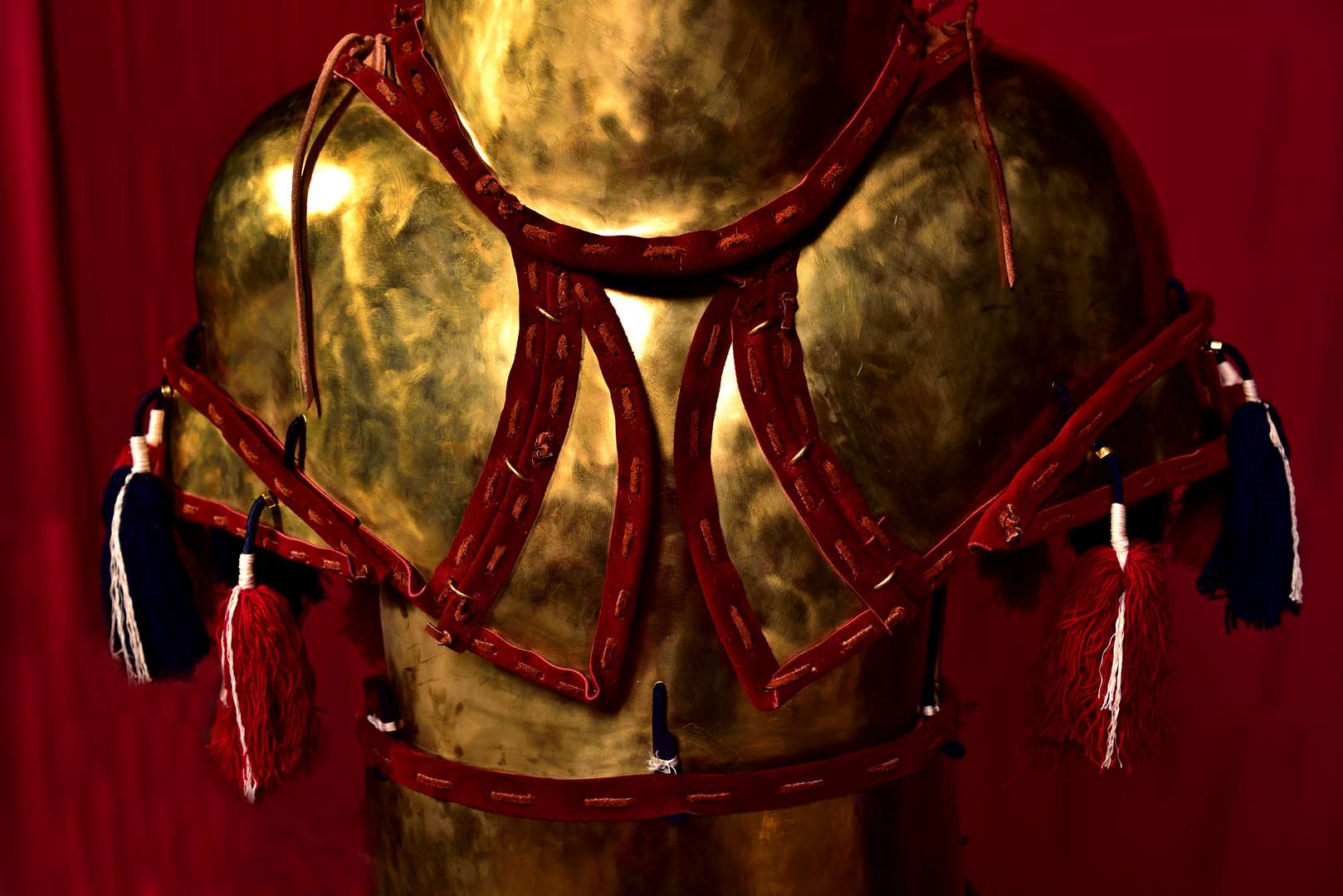 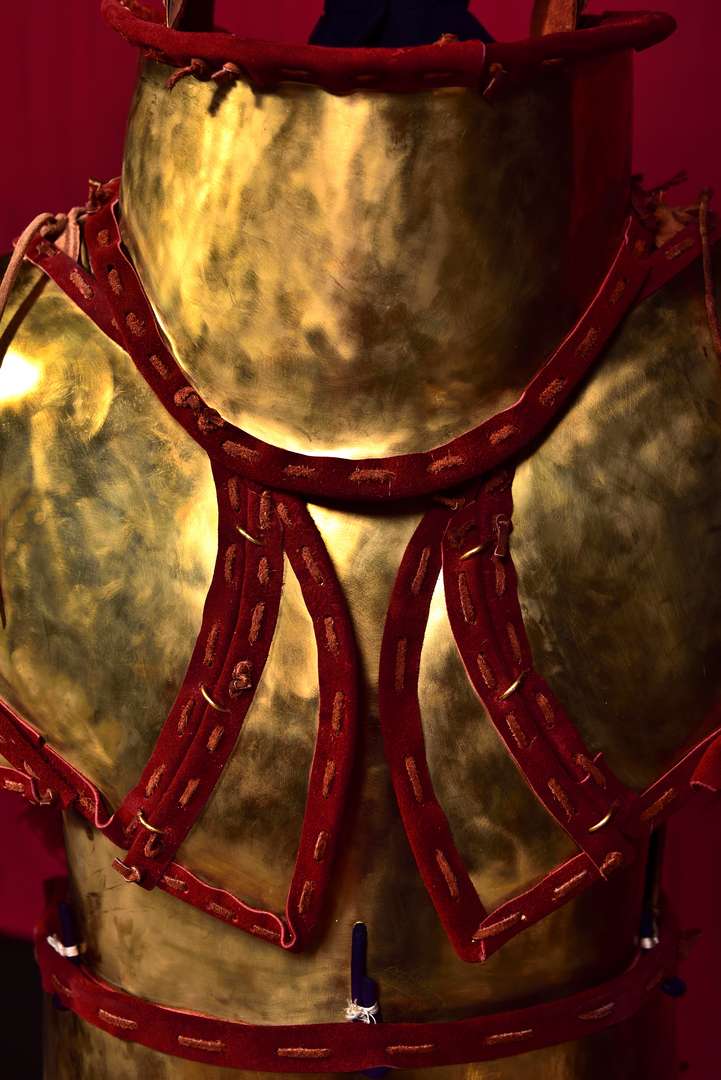 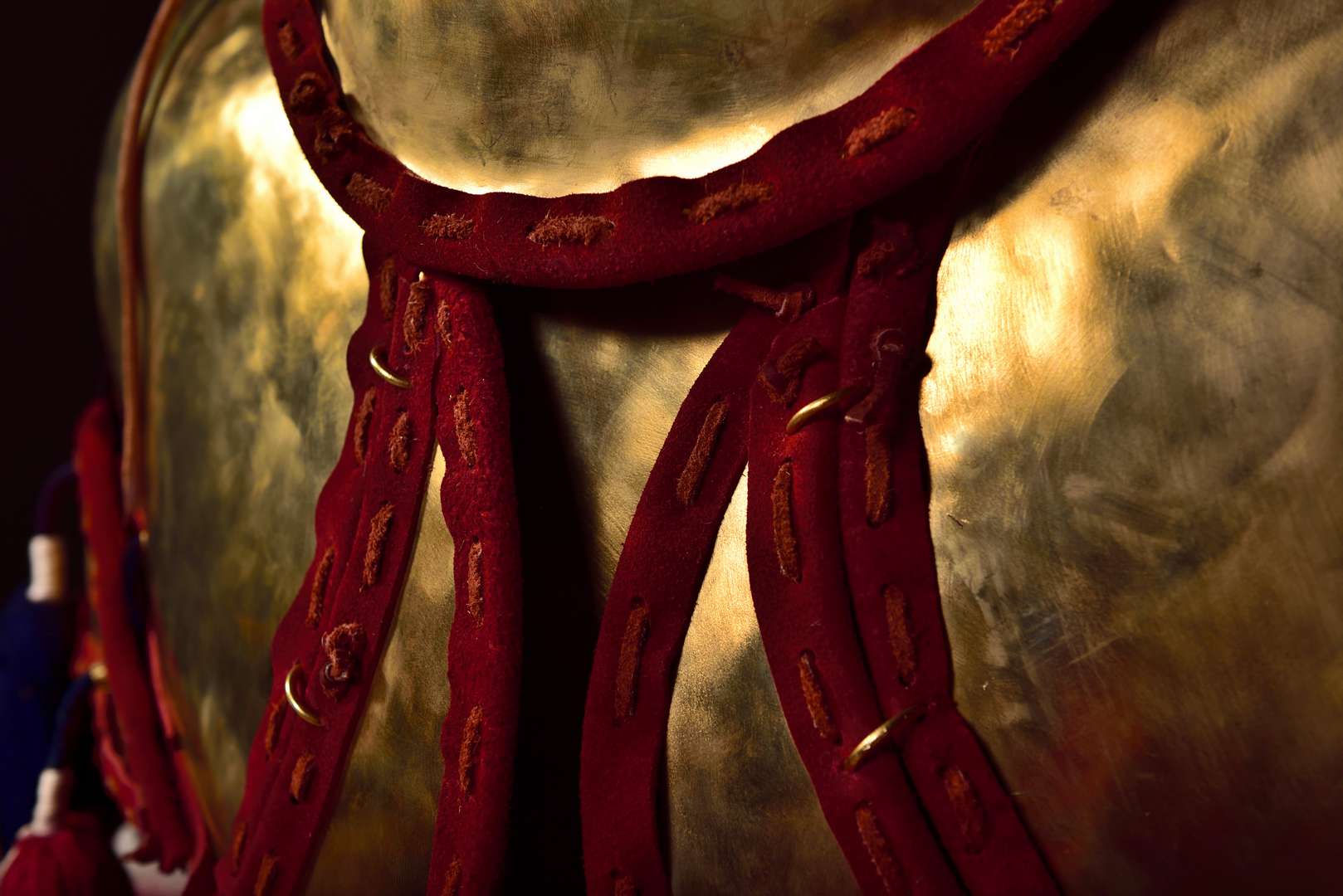 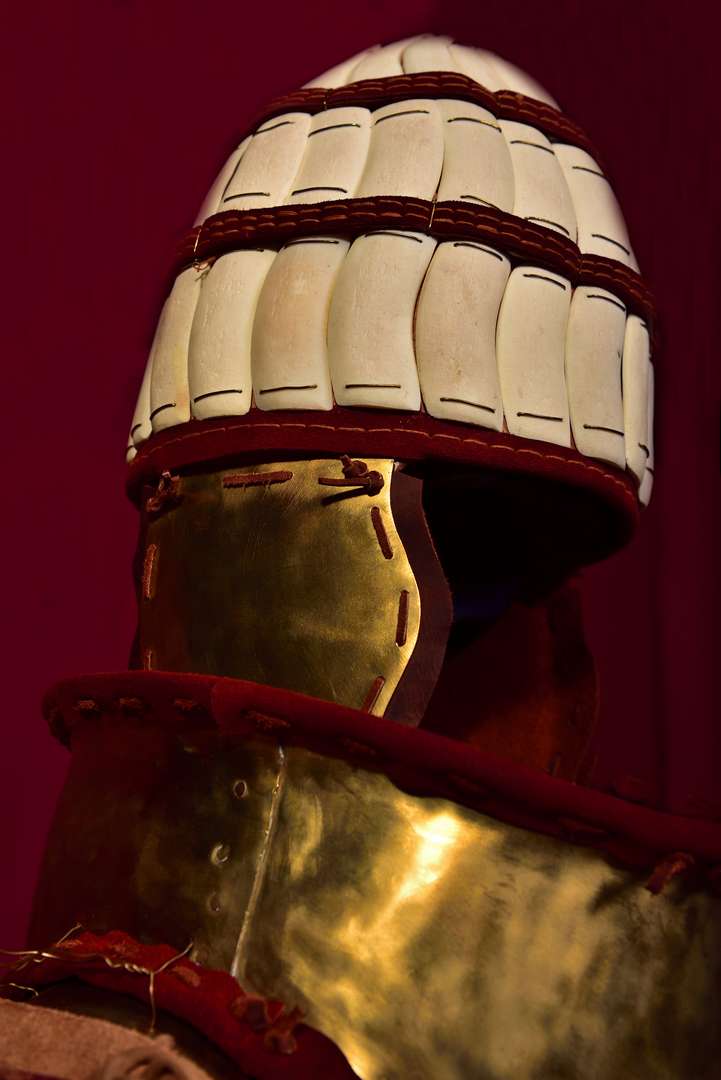 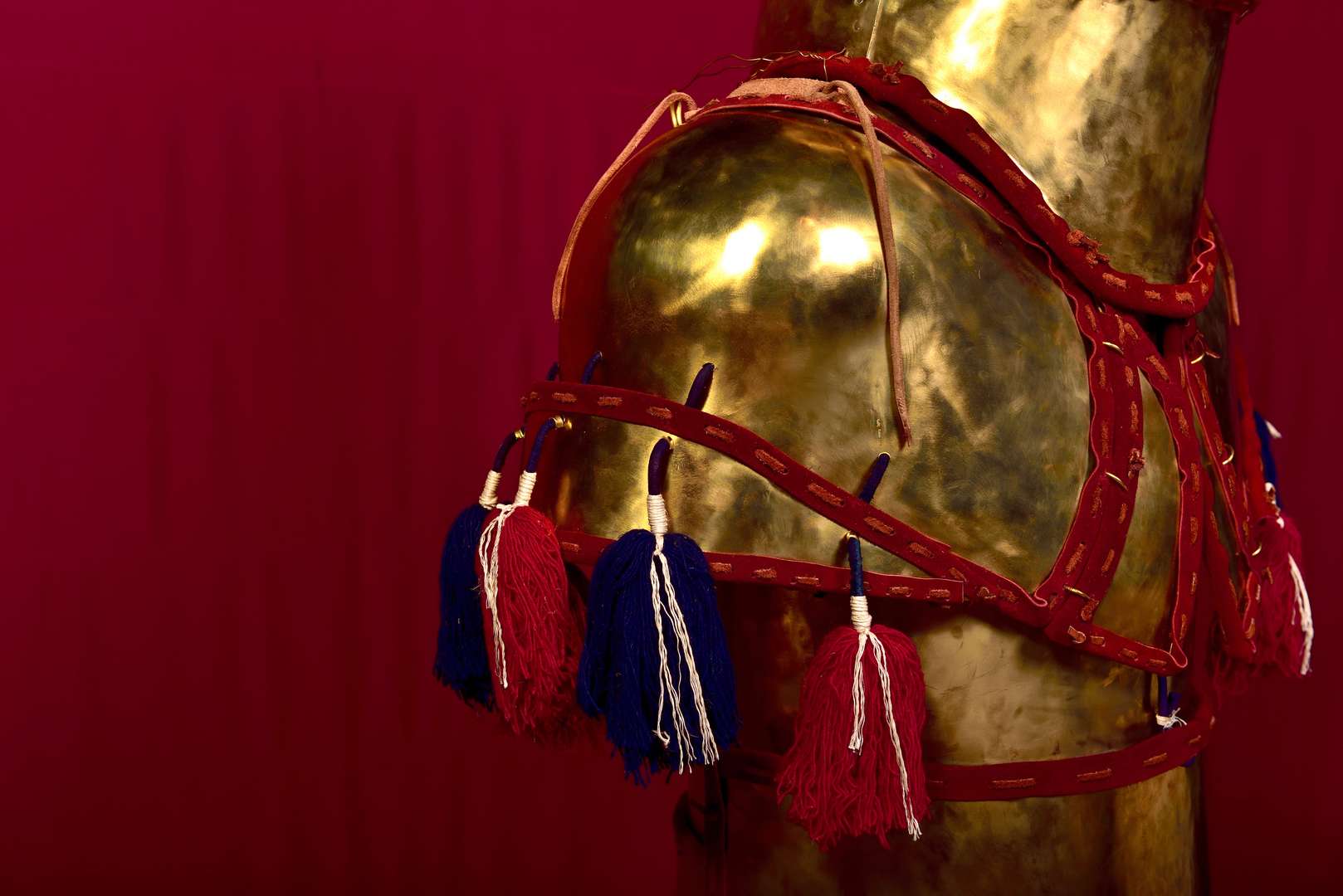 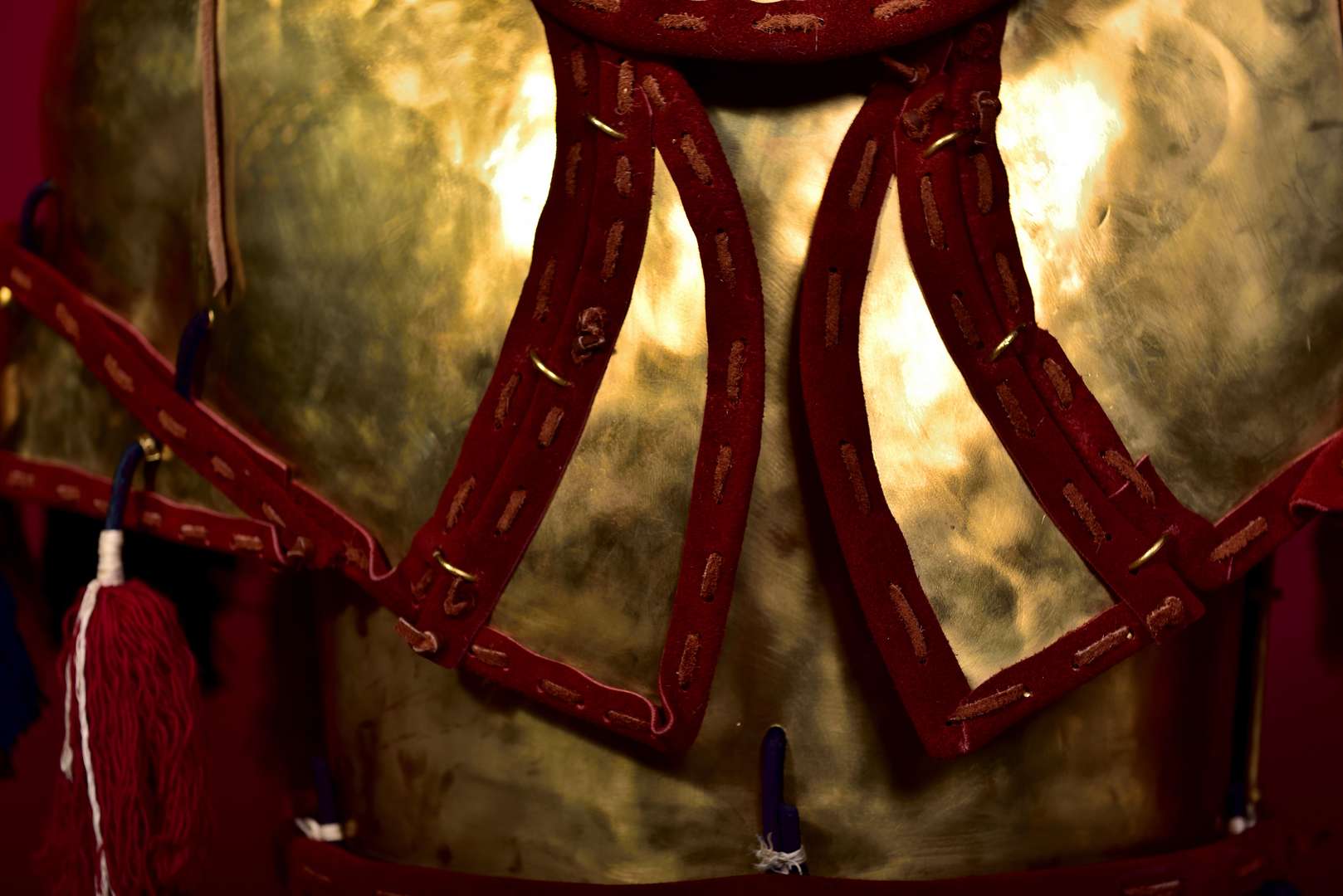 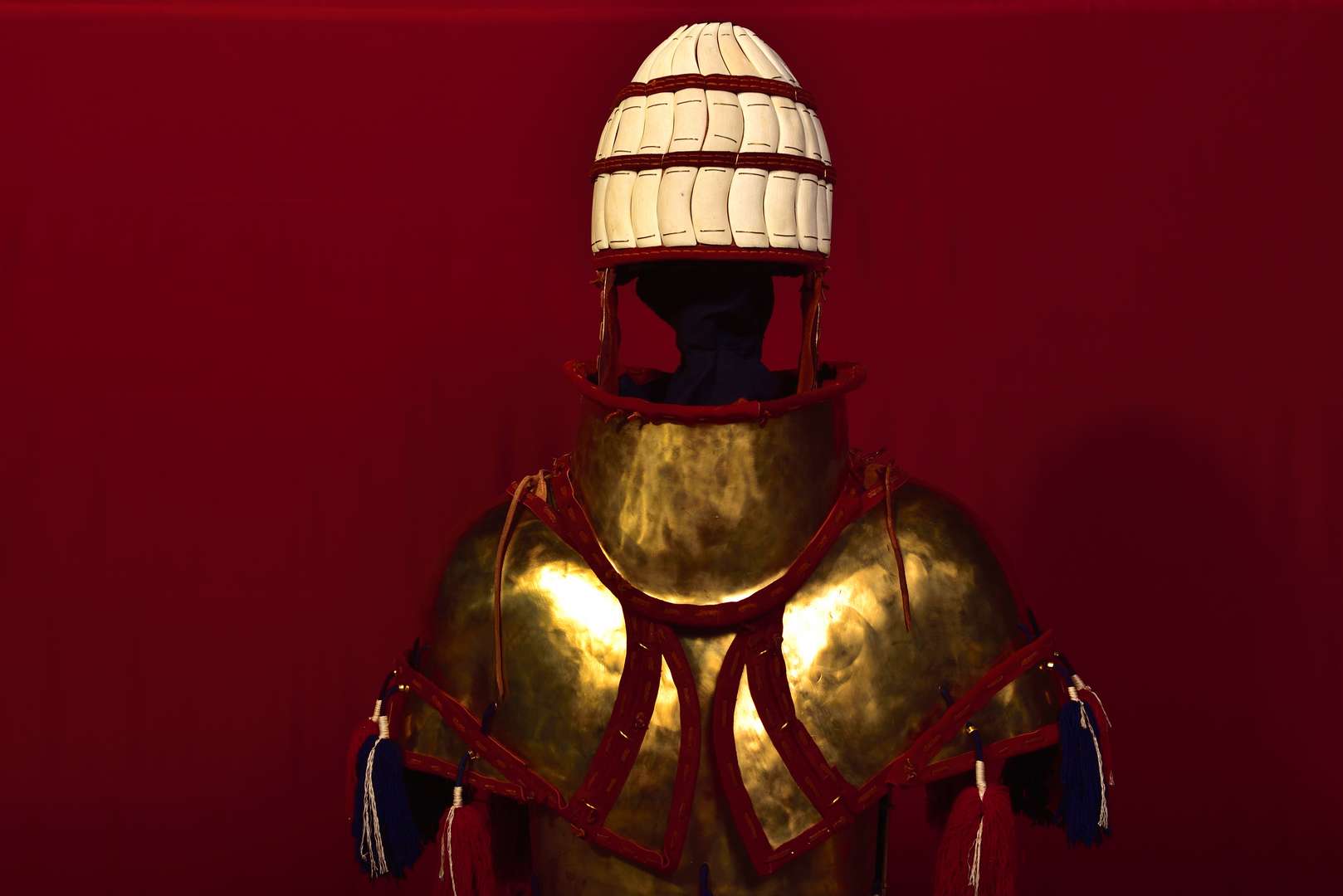