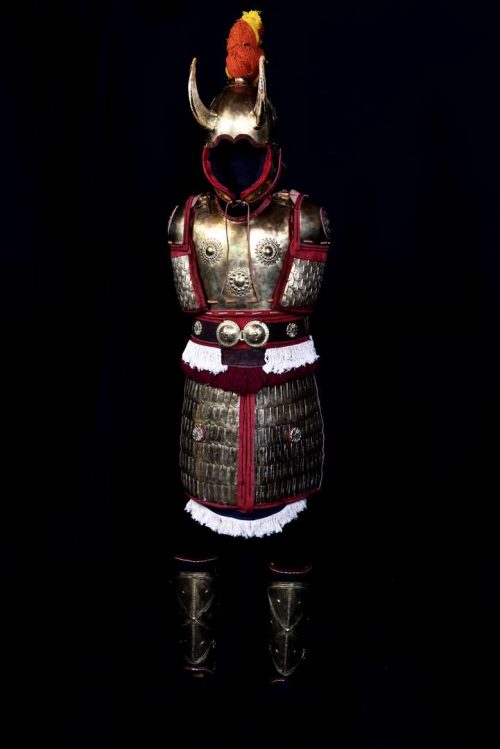 Ηector (Ἕκτωρ) the mighty warrior, the strongest of the Trojan princes, was the son of King Priam.
The army of Troy and her allies unified under his command to face the Achaean invasion from
across the Aegean. With his fighting skills he contributed substantially to the invaders’ bloody
reverses under the walls of Troy and spread terror amongst the Greeks. Hector was also the only
Trojan able to meet the best of the Achaean warrior-heroes on equal terms, submitting only to the
Greek super-hero that was Achilles, the all but invincible one. However, by meeting him, knowing
he would be going to his death, Hector gained eternal honour and fame for his city-state. The
dishonourable treatment of his corpse by his victor -dragging it for twelve days behind his chariotdid
little to tarnish his heroic and honourable name and his father’s begging for the body is one of
the Iliad’s finest moments.

It is accepted that Hector wears the first armour of Achilles which passed to him as war booty after
his killing of Patroklos. Logically then, this very armour should have been manufactured and
finished according to Achaean technical standards and specifications. Despite this, Dimitrios has
preferred to introduce some Middle Eastern elements as tribute to their indigenous military
tradition.

Αccording to Homer, Hector’s armour was covered in bronze

From each torso plate hang two symmetrical ‘Π’ shaped sockets for the shouldercurtains’ for the efficient and flexible protection of the groin and thighs down to the knees. The two pairs of curtains have been covered with overlapping ridged, rounded scales in bronze, securely attached to the inner side of the lower peripheral rim of
the torso. An extra thick leather belt keeps the upper parts of the ‘Π’ shaped sockets for the shouldercurtains’ tightly together. The belt is decorated with cast bronze rosettes and rich woolen tufts creating an impressive optical effect.

The buckle is secured with a hinge. All the edges of the ‘Π’ shaped sockets for the shouldercurtains’ have been folded with handstiched purple leather.

Two composite pauldrons, partly plate (the curved anatomical element) and partly scaled cover the
shoulder areas. The scales are once again securely attached to an organic thick substratum made of
linen thus ensuring a flexible and adjustable surface. The pauldrons are attached to the main torso
through a mechanism of rings and leather cords. Star-like appliques (repoussé) have also been
applied as ornaments.

The greaves were made of two beaten bronze sheets shaped anatomically. They are lined and
padded with thick linen to allow them to be worn safely by the hoplite. Durable leather straps hold
them in place, with bronze wire threaded through the edges. The overall design of the decorations
on the greaves have been based on relevant findings from the warrior grave ‘A’ in Kallithea dating
about 1370 BC.

The helmet is composite, with the overall shape based on a pictorial representation retreaved from a
Hittite fragment of a clay vessel from Bogazkoy, dated around 1350 BC. The front of the helmet is
decorated with a pair of natural horns; atop this has been placed a colorful woolen column,
repousse-style appliques to the side and a crane-like structure to the back side with a long green
woolen tail. Two bronze cheek guards protect the lateral sides of the face and a leather zone has
been added to the back rim. Thick padding has been applied to all inner surfaces. 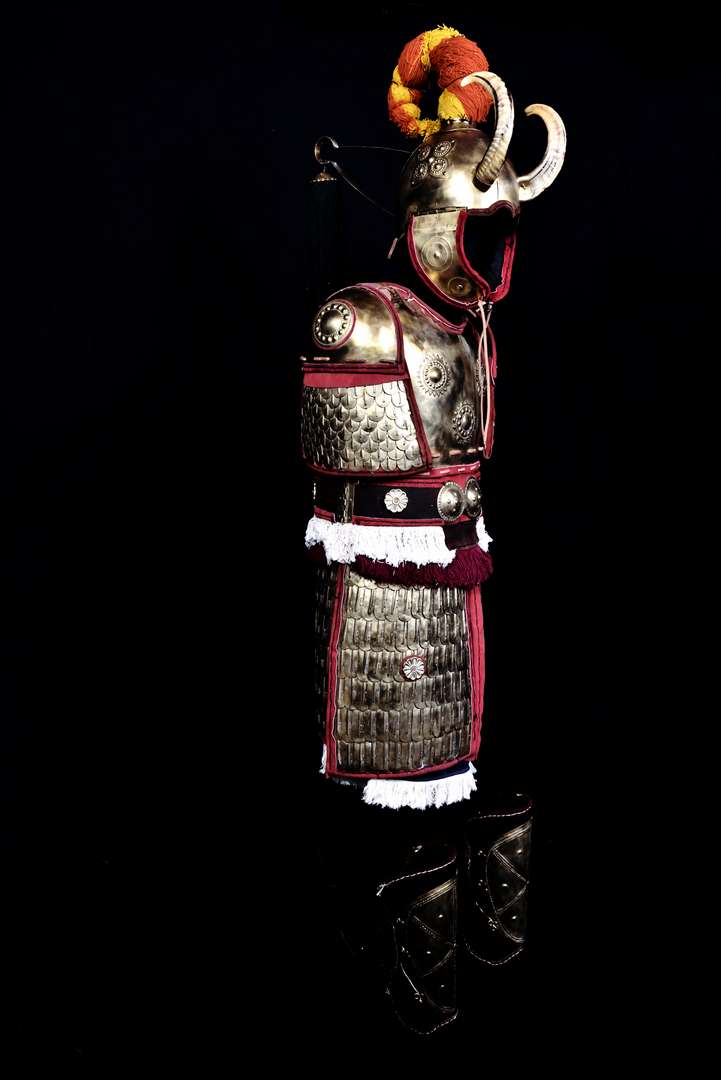 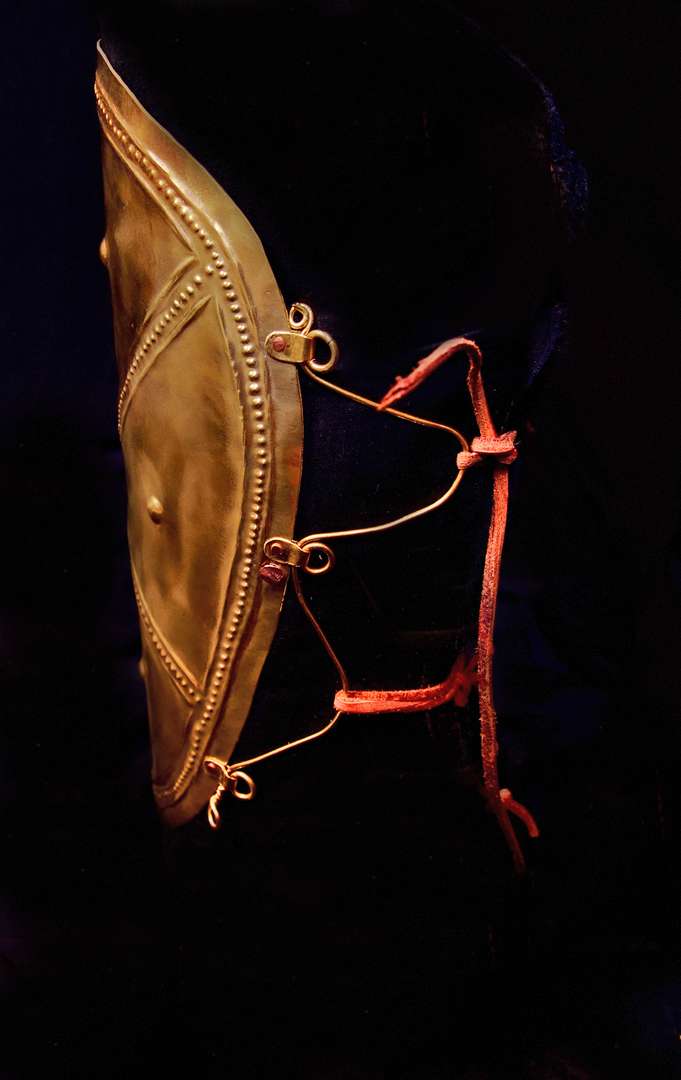 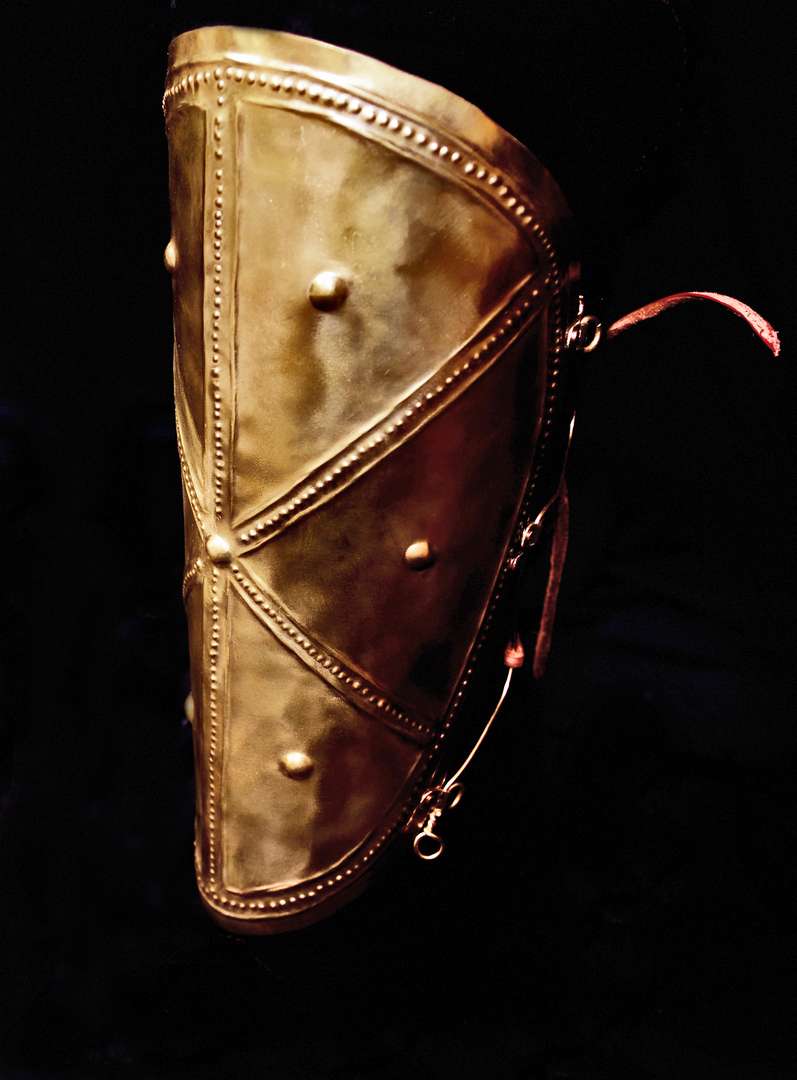 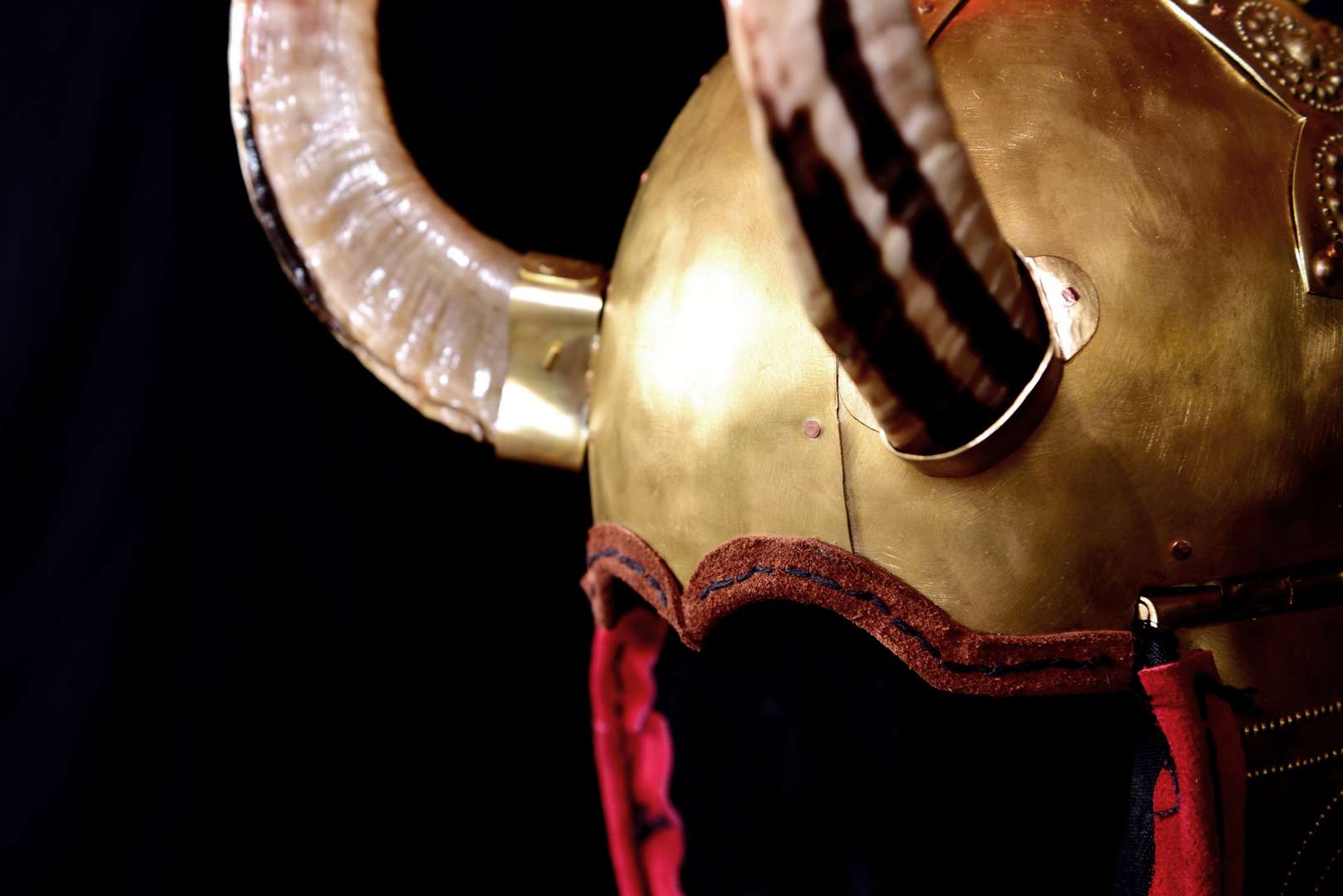 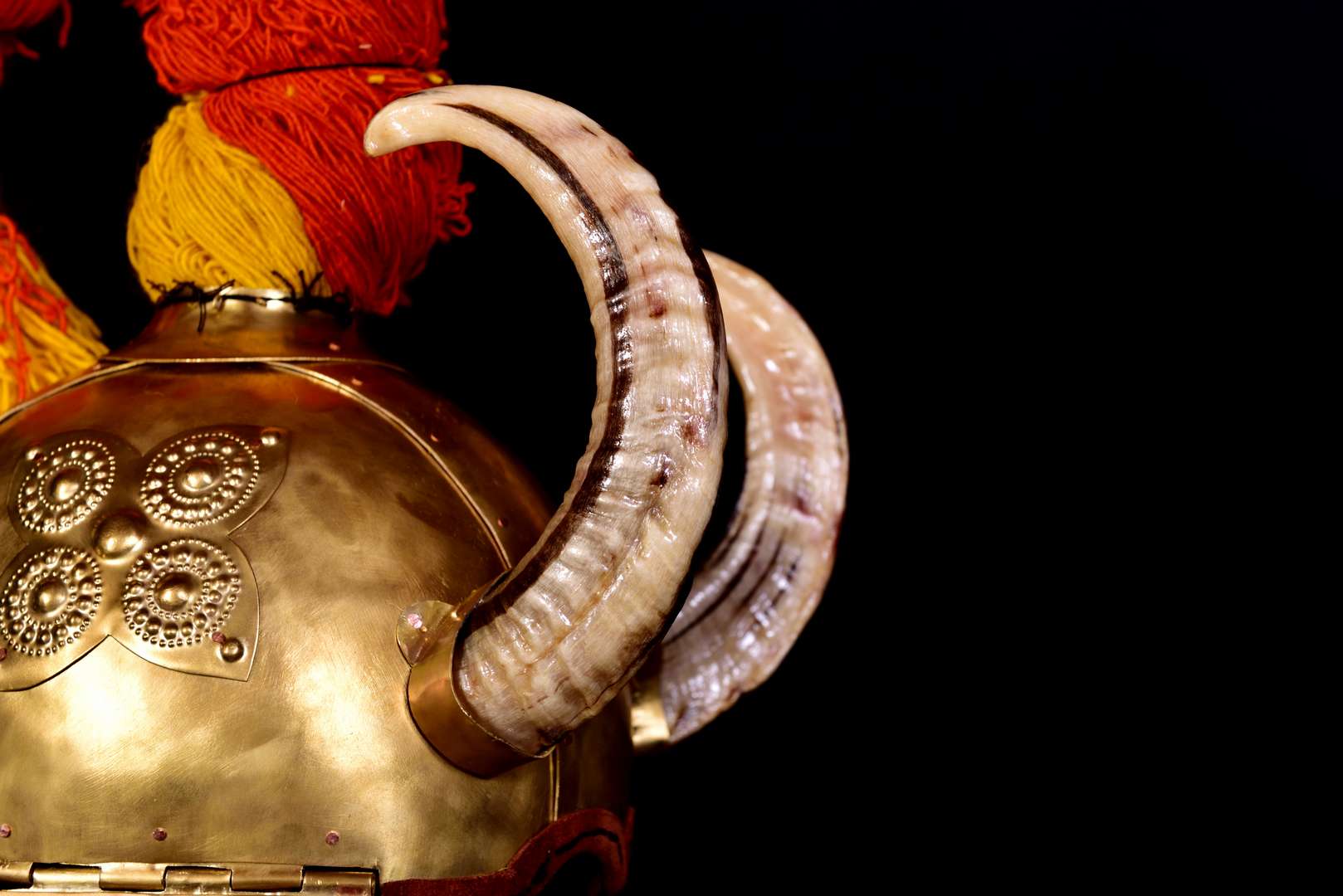 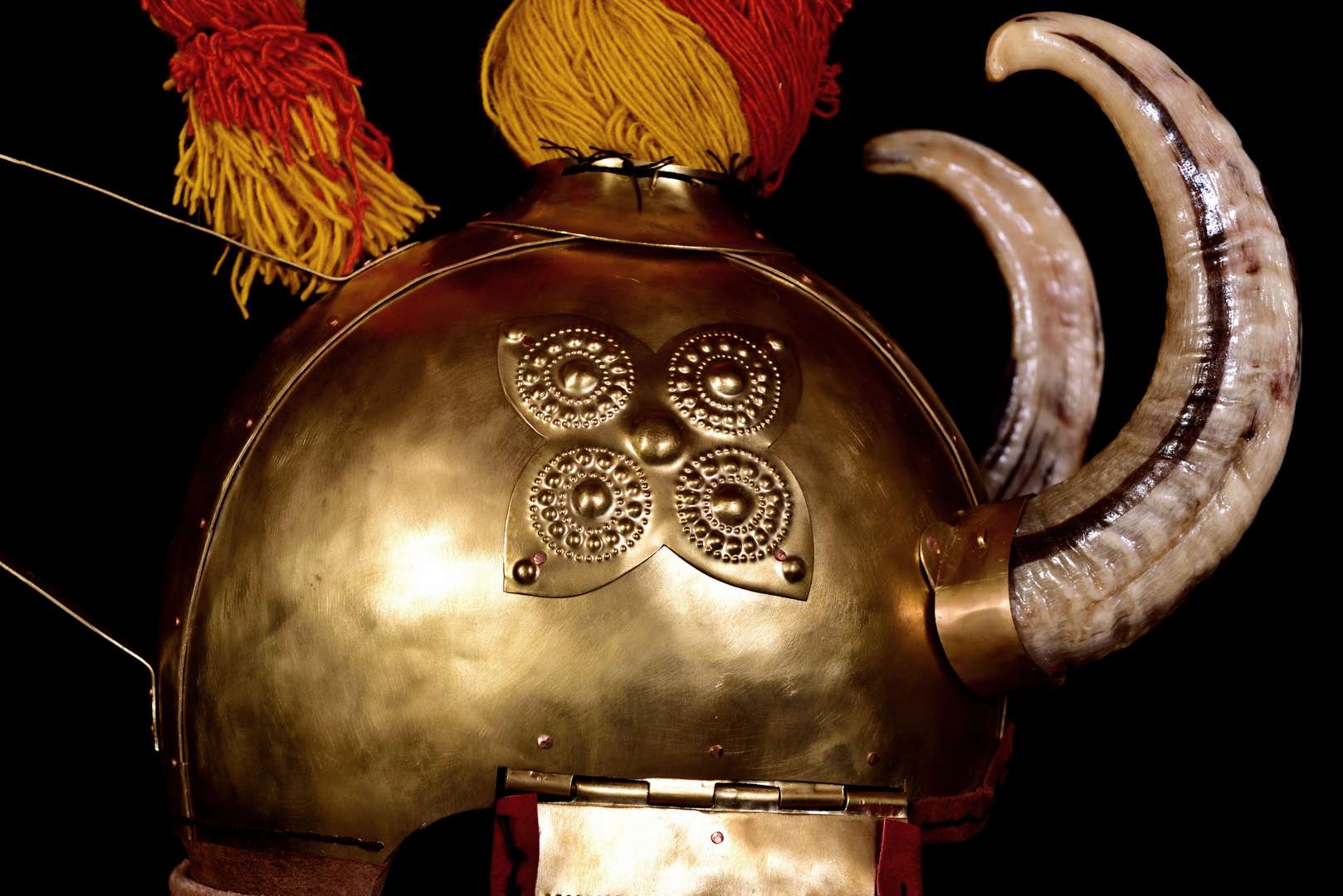 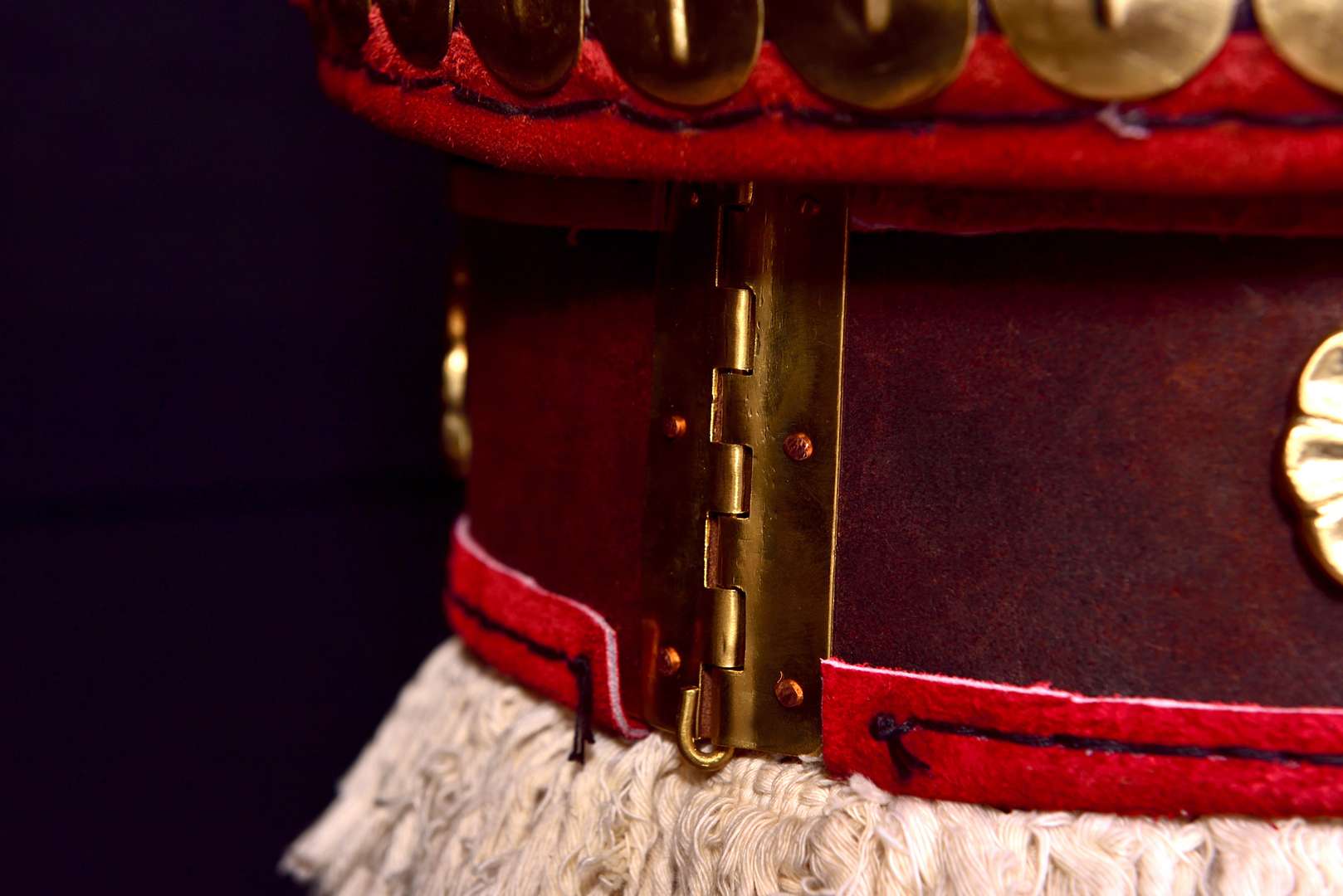 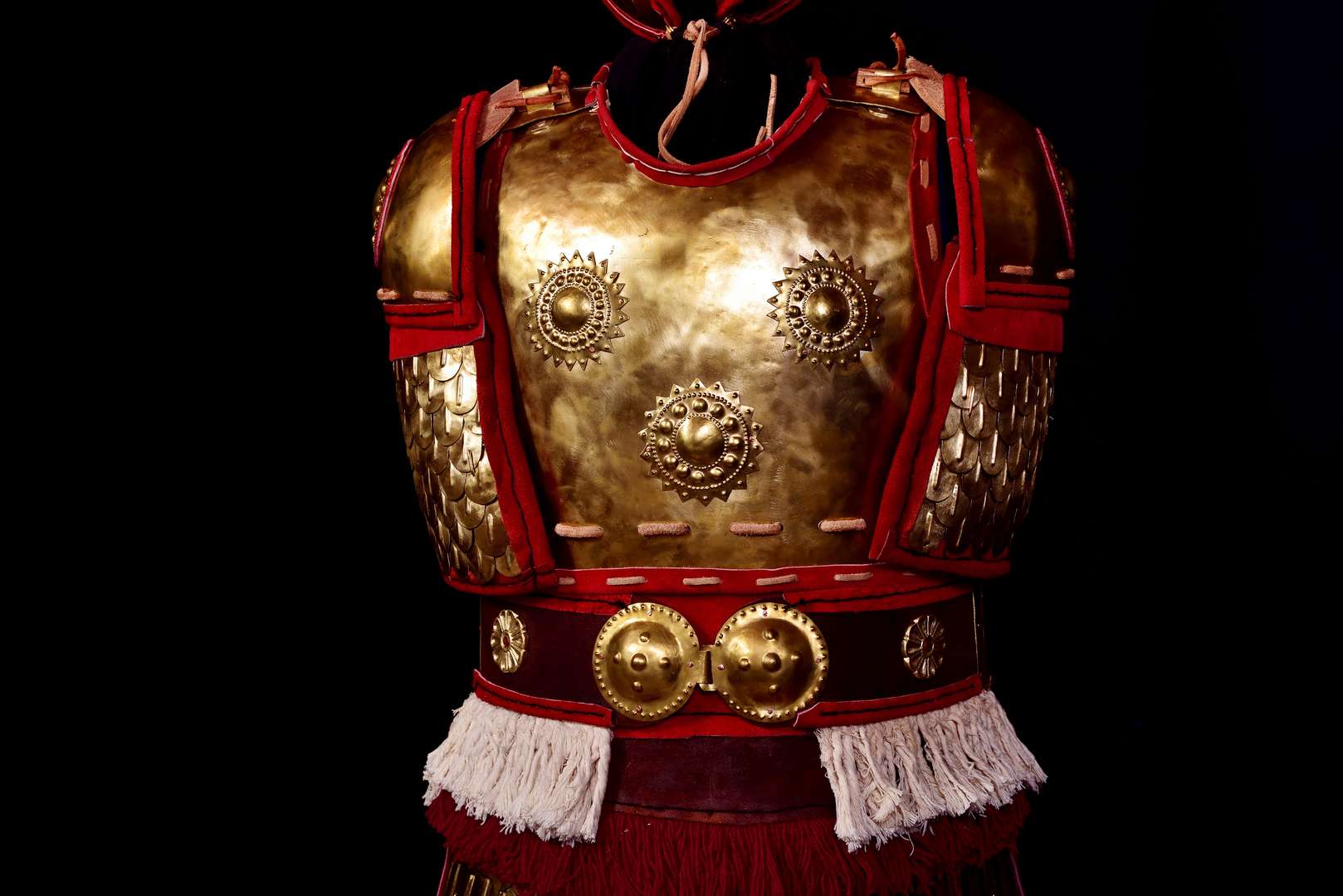 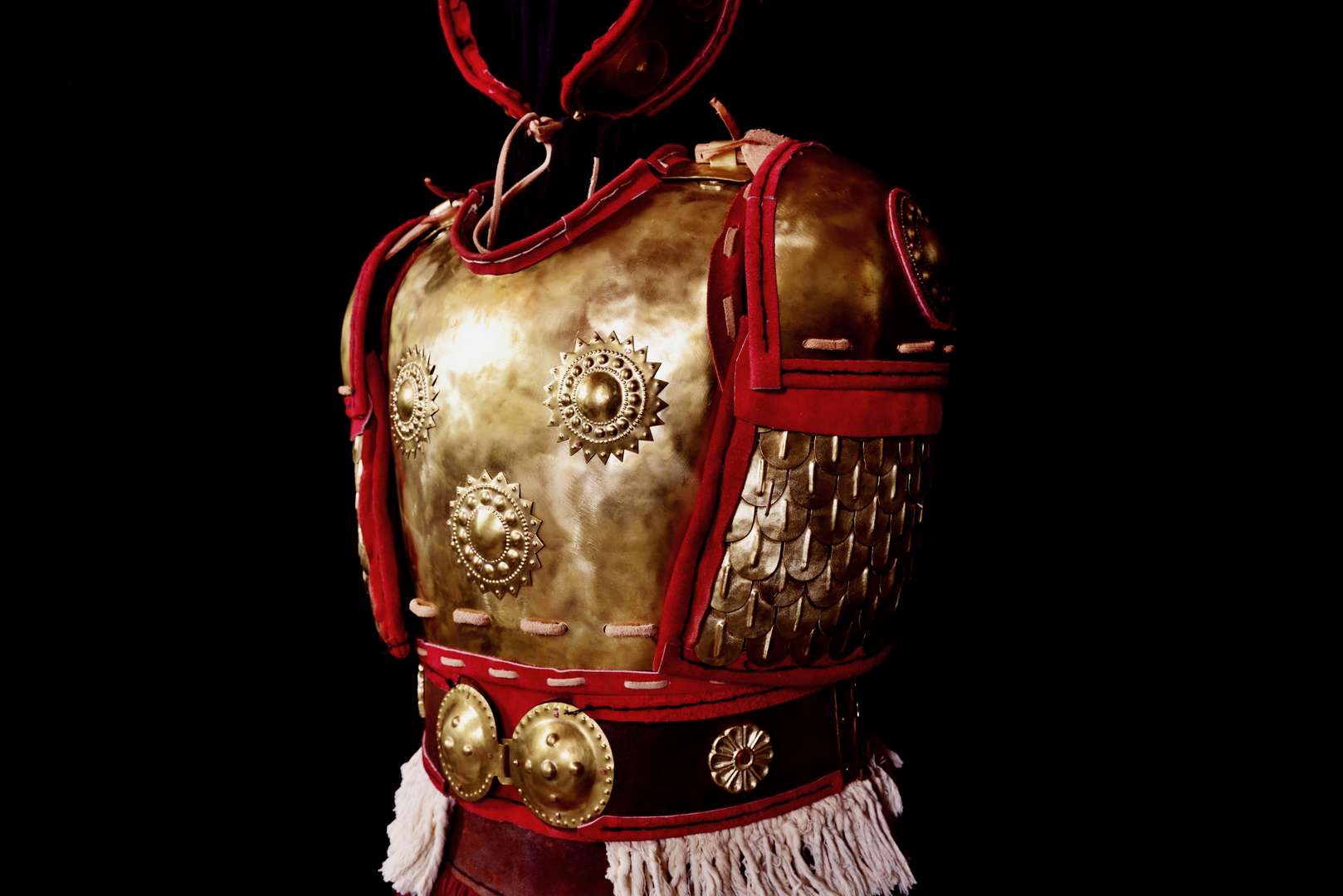 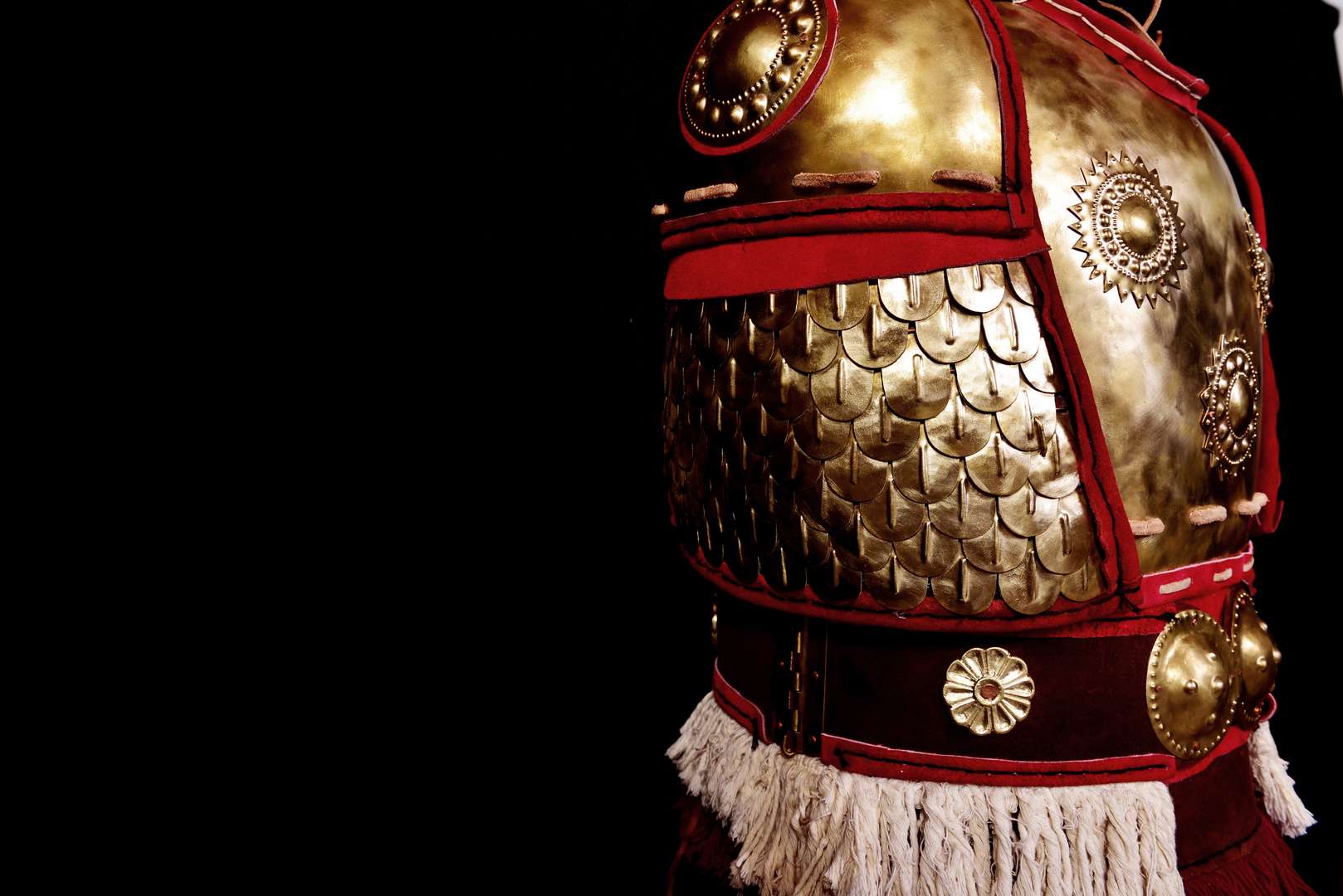 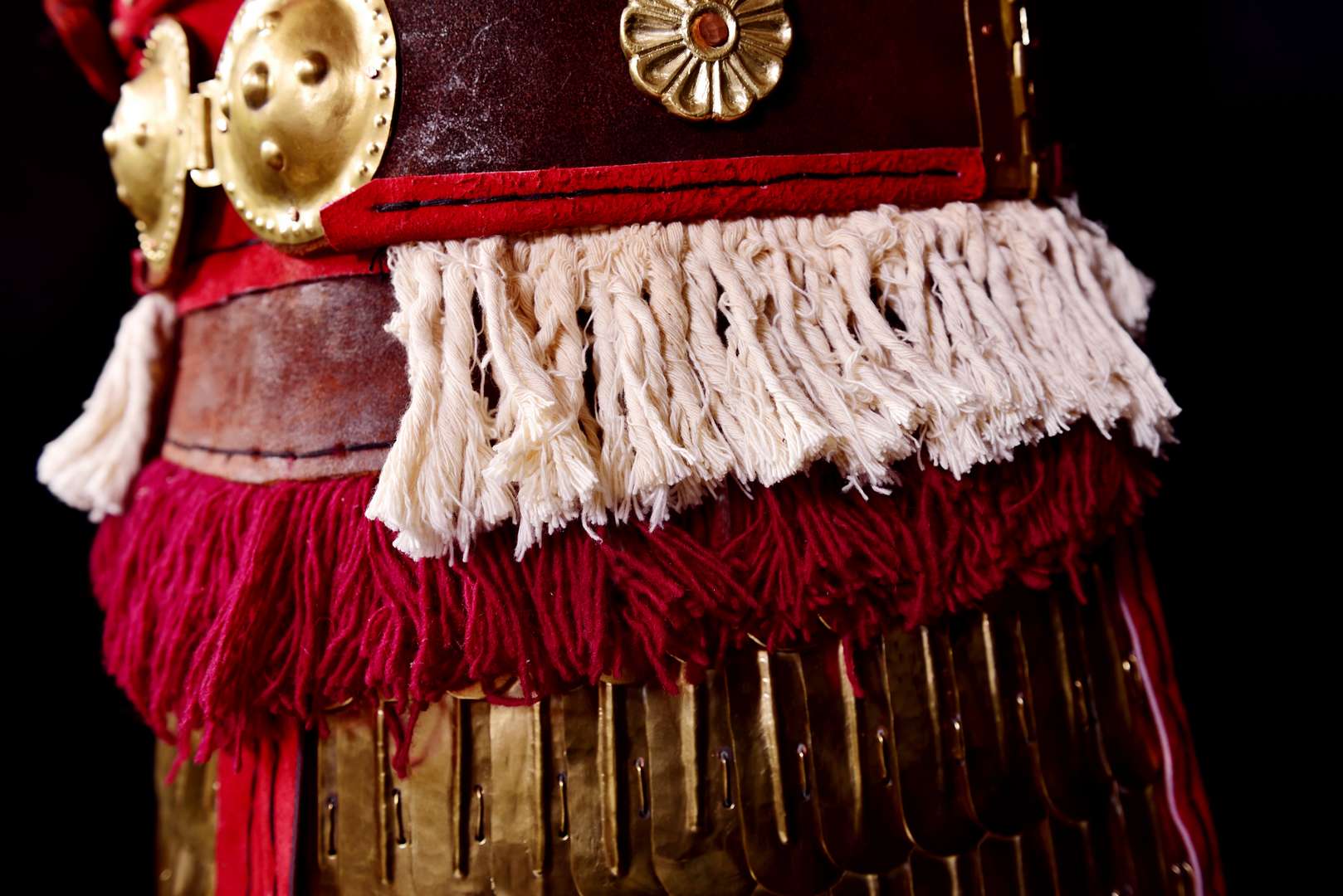 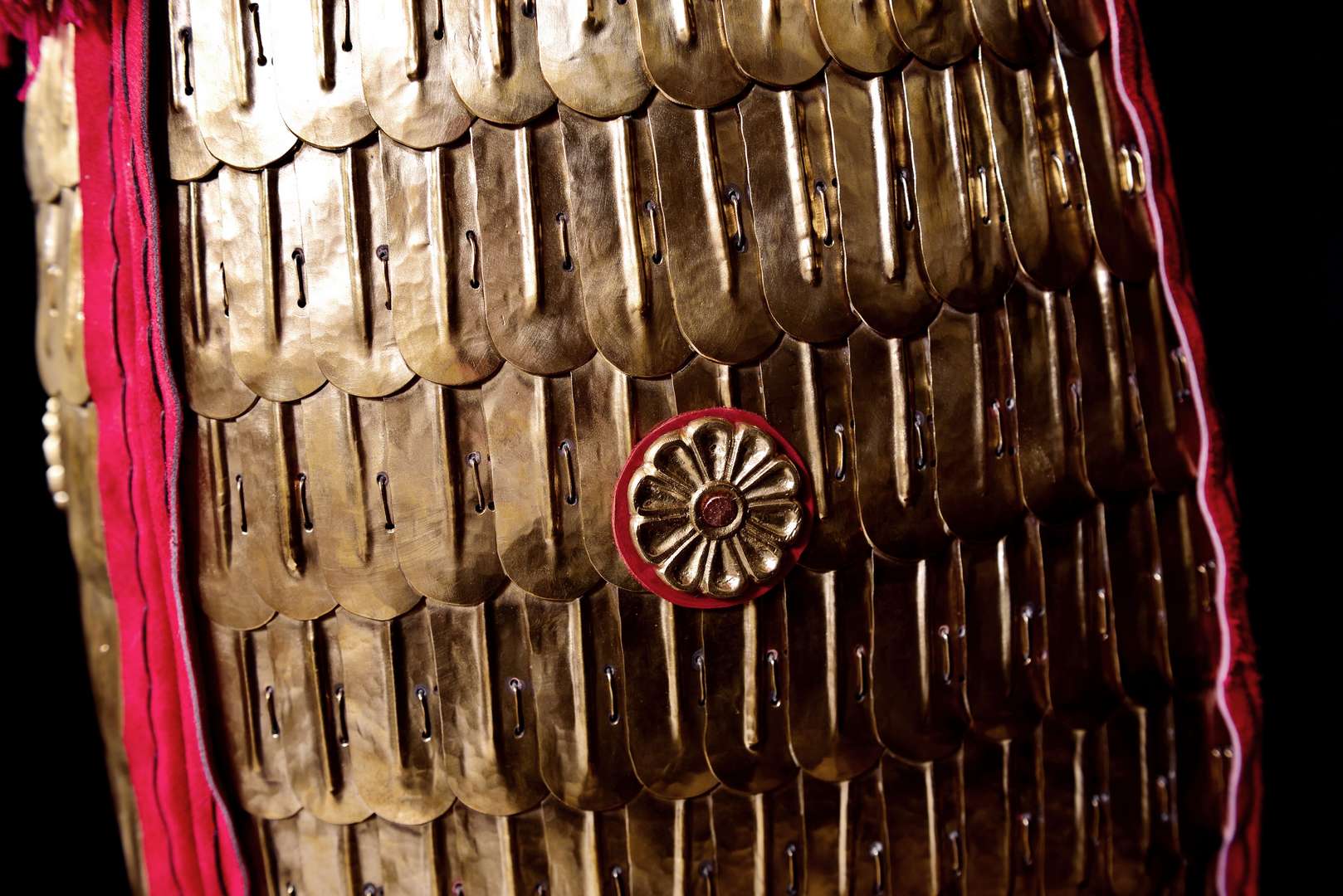 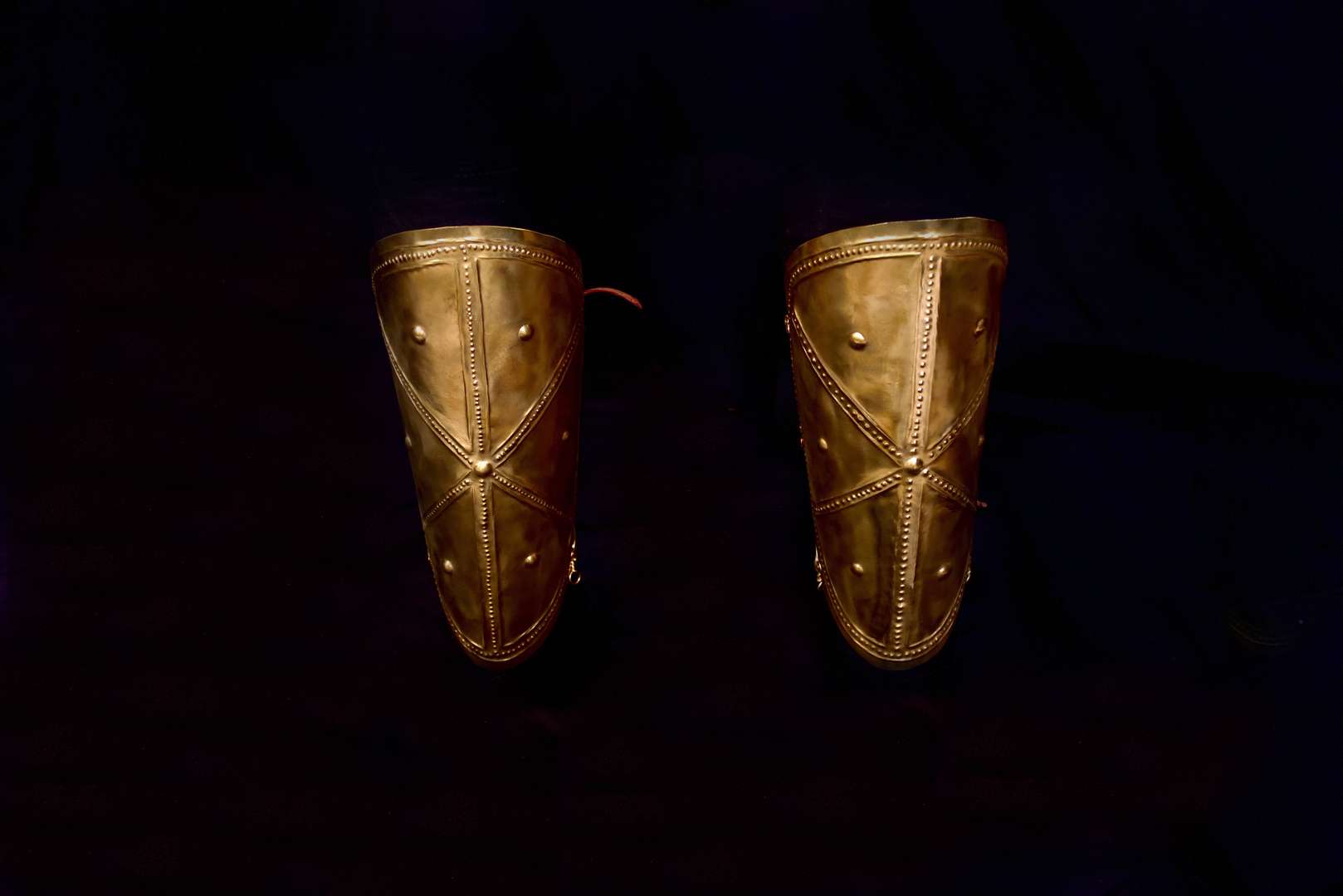 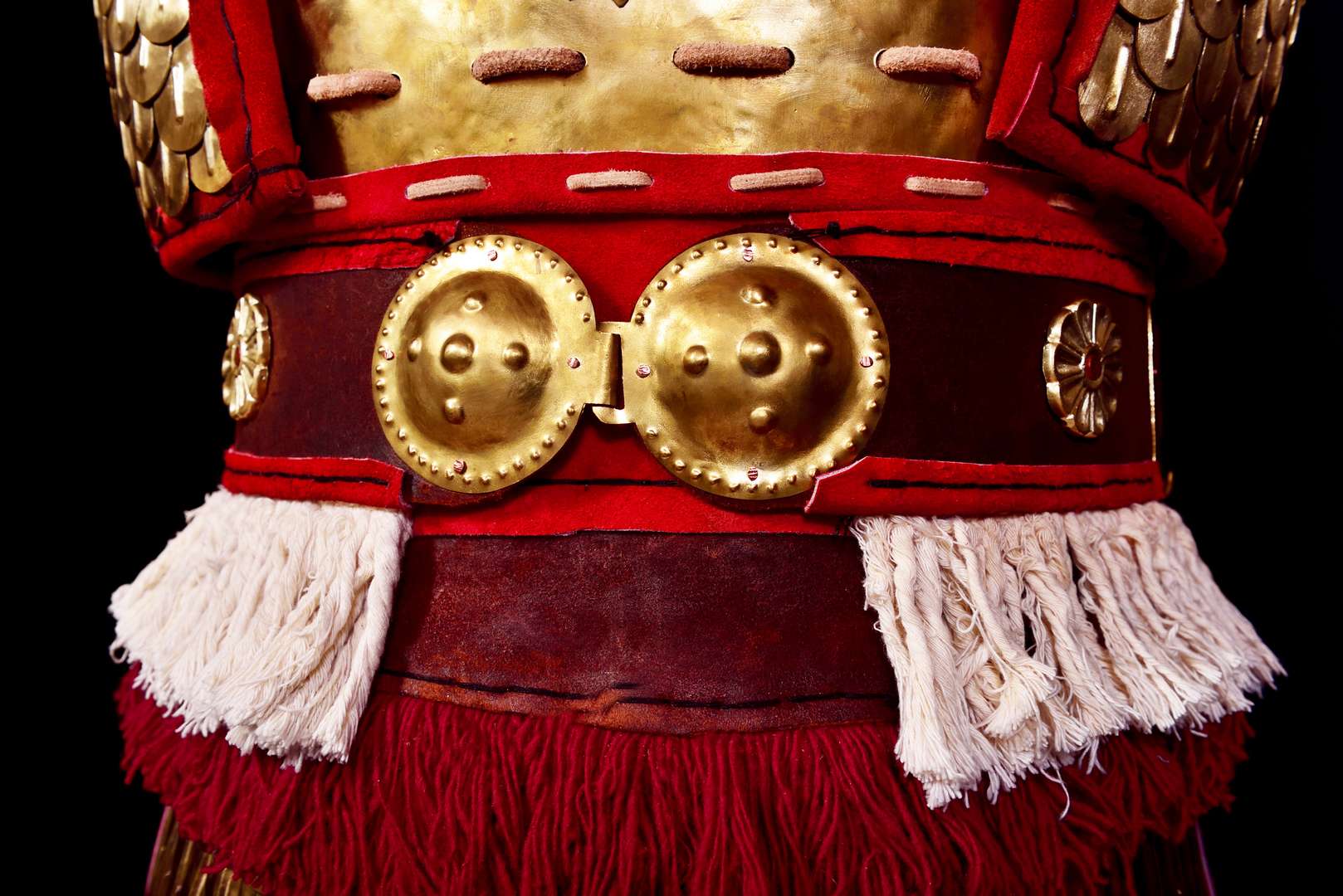 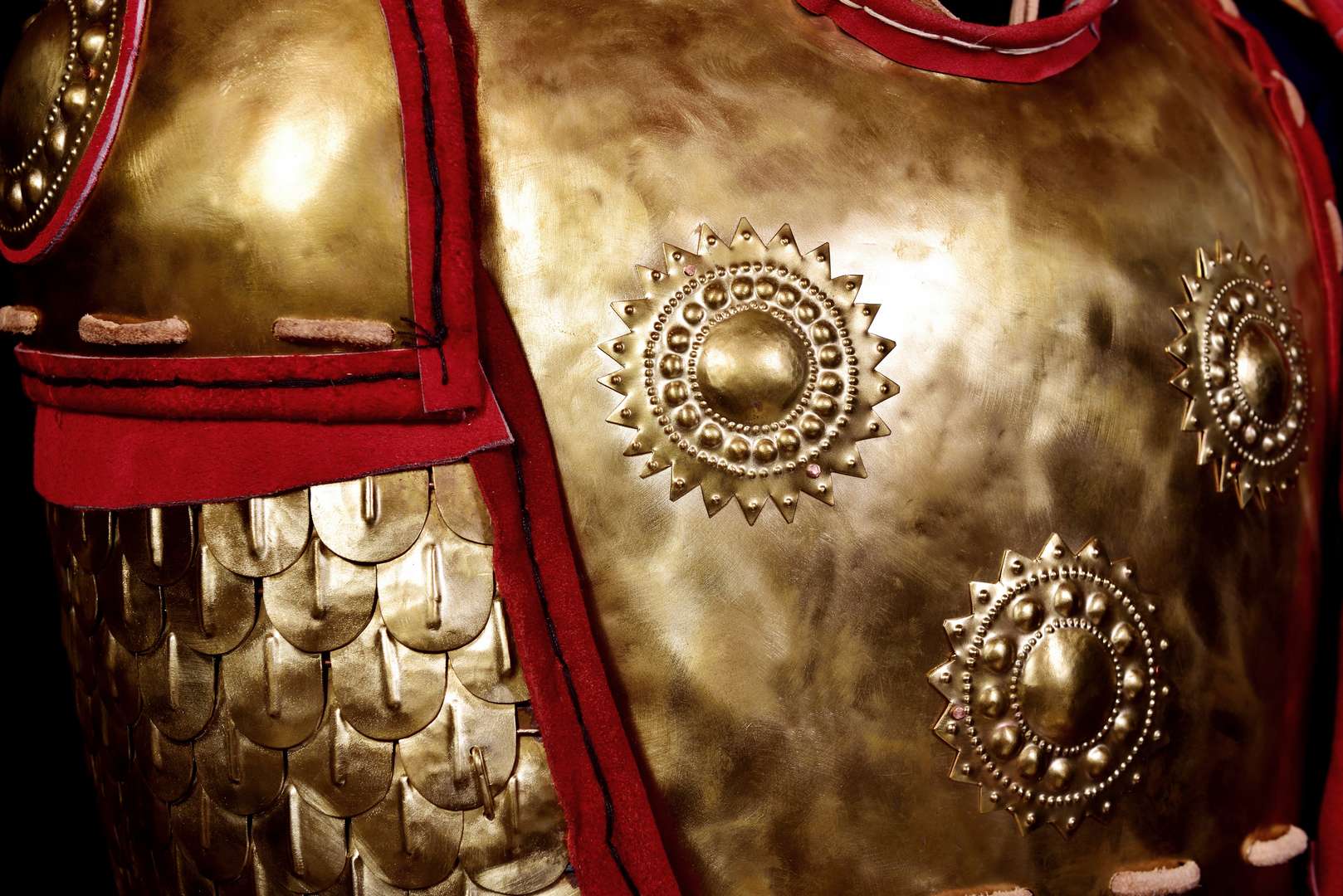 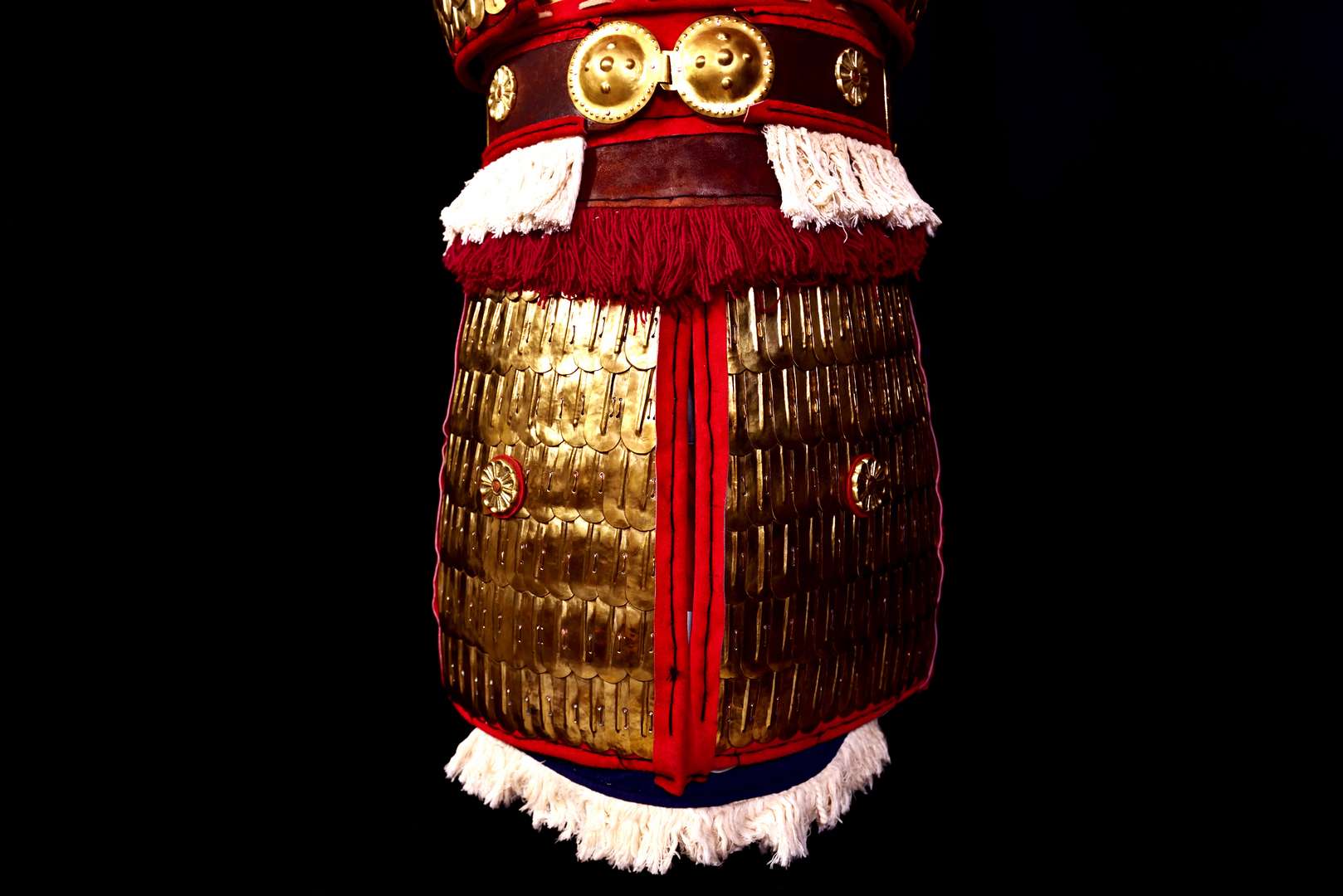 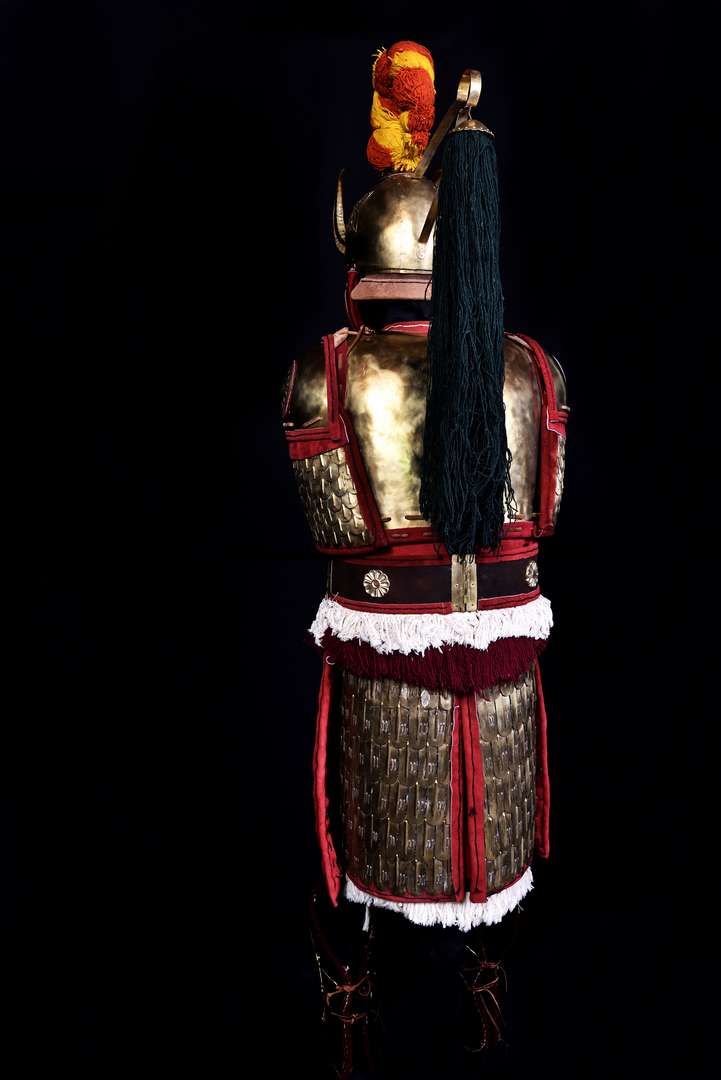 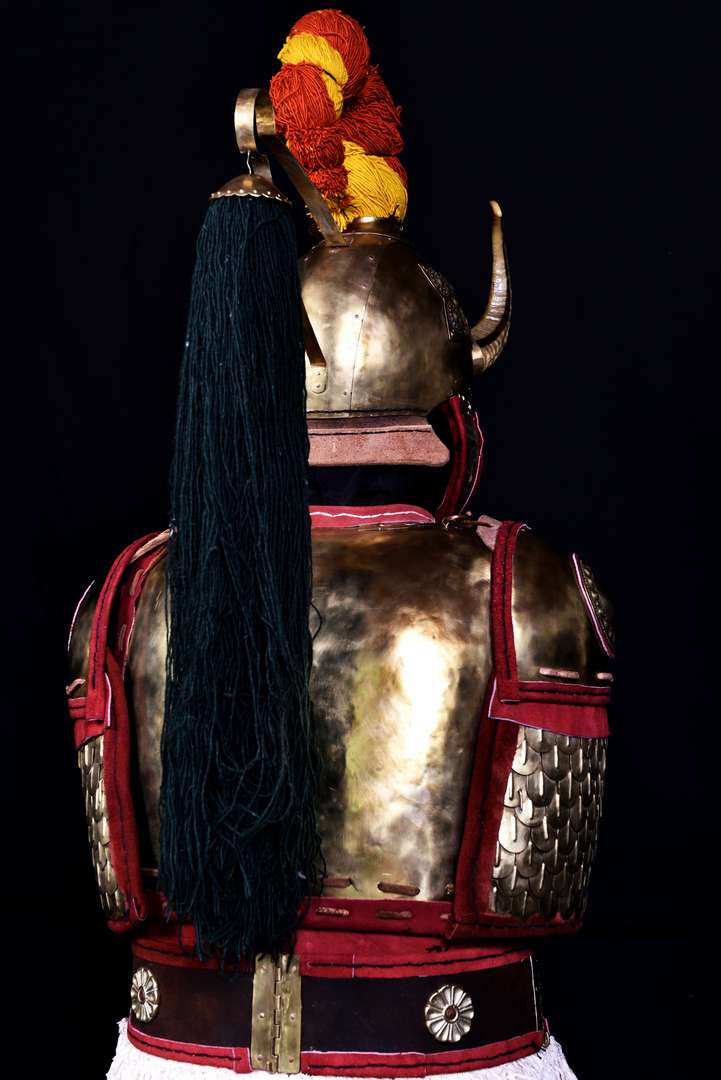 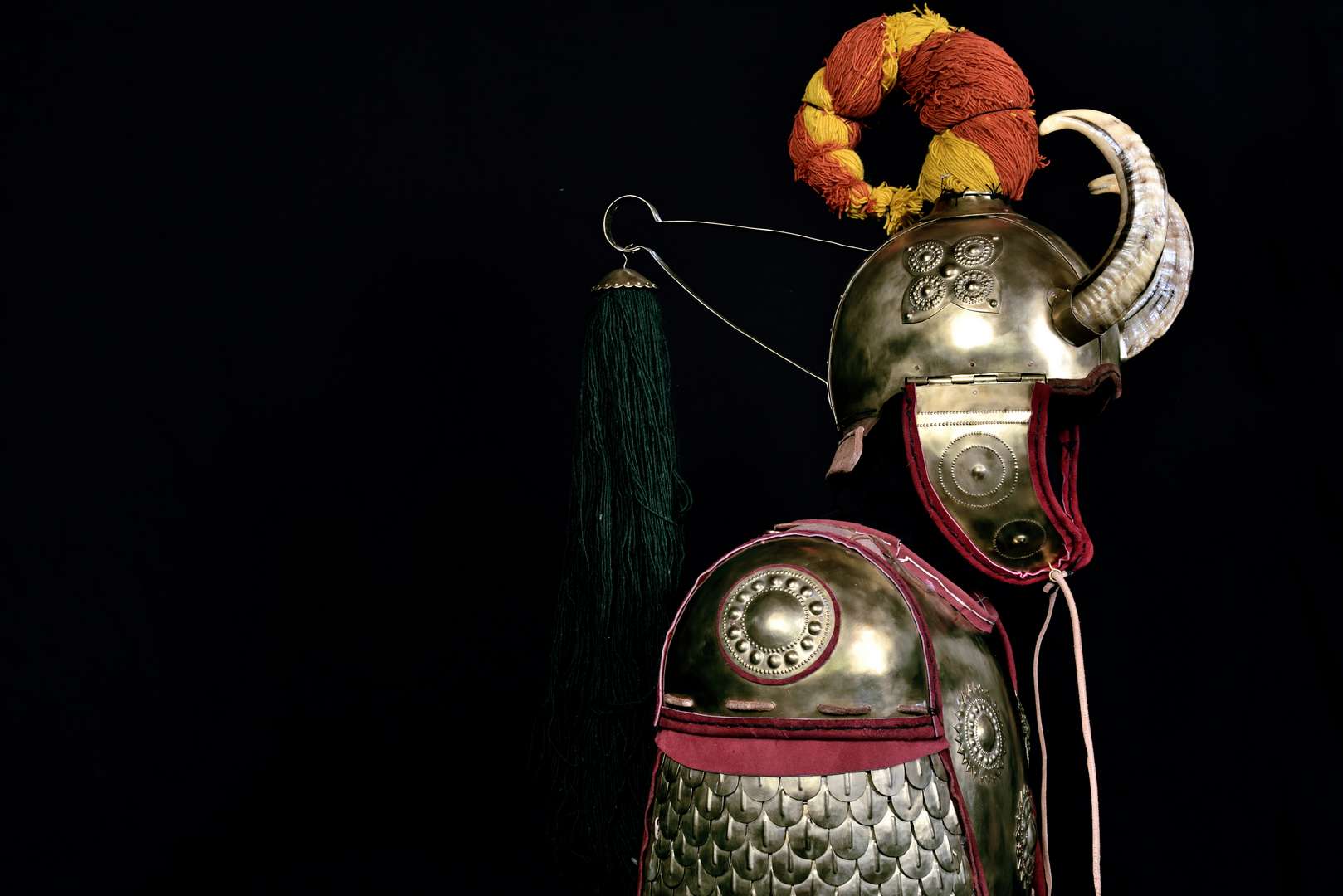 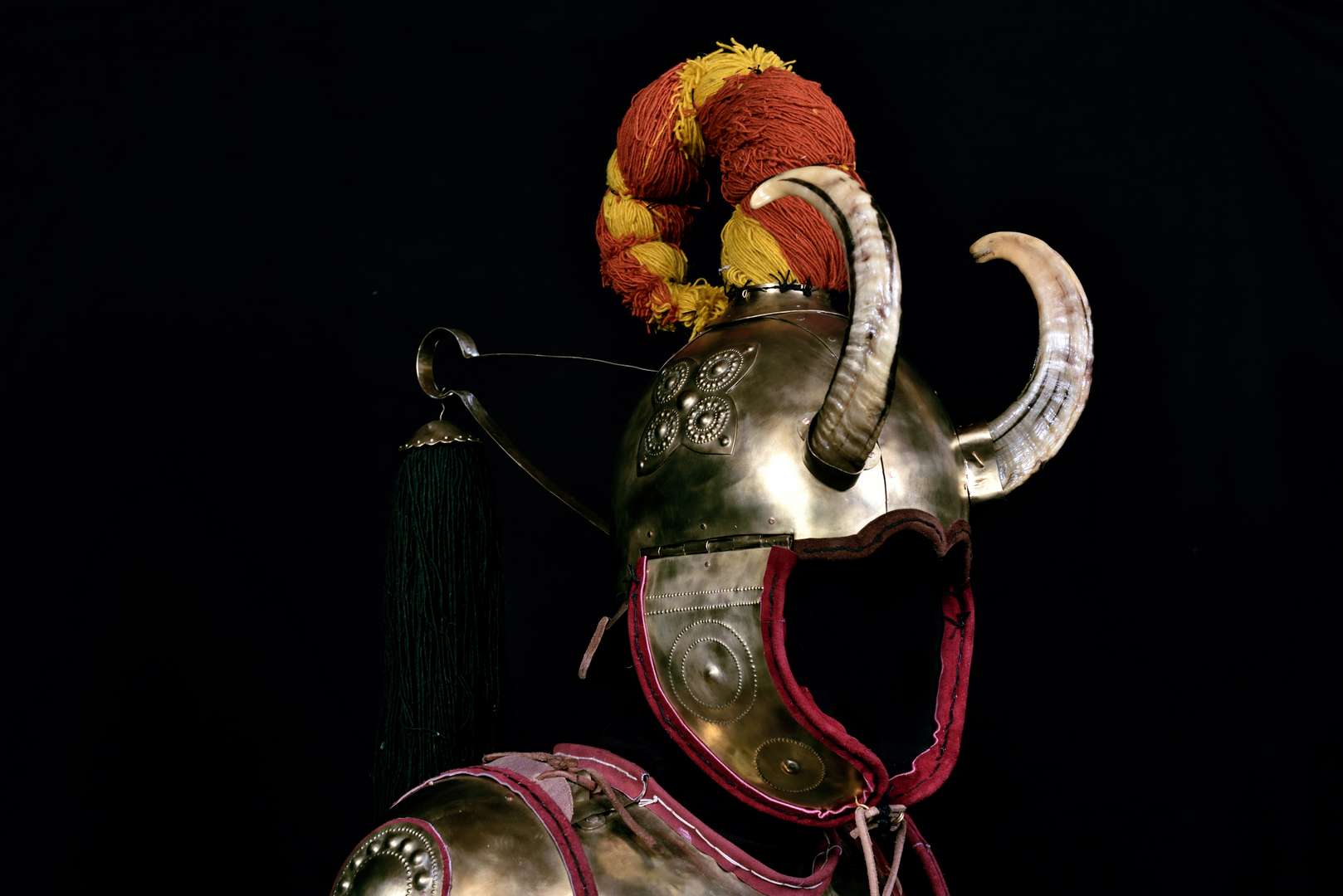 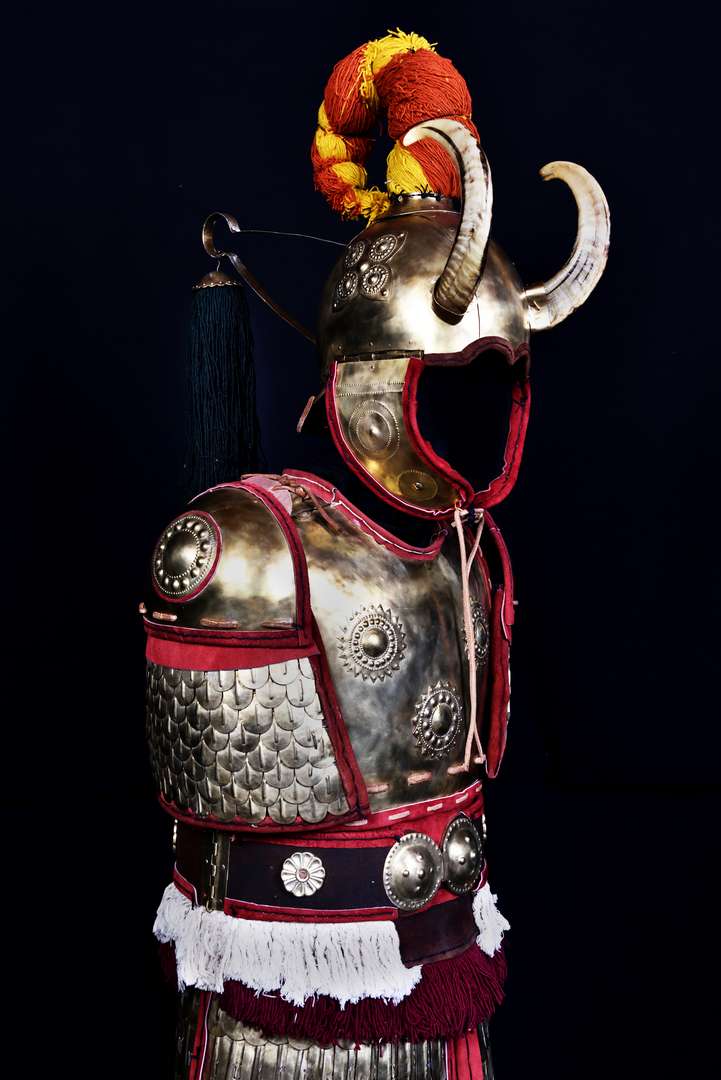