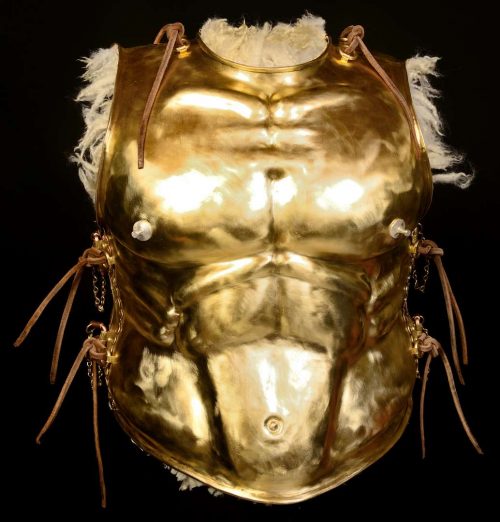 In 1967, an ancient shipwreck was found in the shallows off the coast of
Almuñécar in Andalucia, Spain (near Cueva del Jarro). Among the
findings, at a depth of 25 meters, was a bronze breastplate styled after the
Greek fashion. After restoration the piece is currently displayed in the
provincial Archaelogical Museum of Granada. Until today it is the only
example of a Greek muscled cuirass found in the Iberian Peninsula and is
considered as the most remote such specimen in the Mediterranean.

Surprisingly, the general condition of the cuirass is quite good despite the
fact that marine life corrosion destroyed the lower part. The elements that
were undamaged were enough to reconstitute its whole appearance and
anatomical features. Only two out of the four hinges have survived but
originally, each of the sides would have been secured (under the armpits)
by two pairs of bronze hinges, attached by means of round head rivets
held together (the front and back) with pins. At the shoulders and along
both sides the two holes indicate that rings fasteners must have been used
by means of “butterfly” pins. These rings would have had ties,
presumably made of durable leather cords. Combination of hinges and
ring fasteners provided an arrangement that was common technical
practice.

The bronze chest guard is obviously of a classic Greek muscled cuirass
(long type) with all the realistic anatomical features of a heavily built
male athletic torso, with pectoral, abdominal muscles and ribs, depicted
as naturally as possible with incised and raised details of the torso.
Despite the corrosion, it is also easy to observe that the lower edge had
been raised, by curving outwards, to prevent friction with the lower torso
of the wearer.

The specific musculature is refined and well developed aesthetically and
should possibly be attributed to a south Italian workshop (of the first half
of the 4th century BC) because it was during this era that the most
realistically modeled muscled cuirasses were manufactured. The double
thick lines which stand out at the sternum is a strong indication of the
above speculation of its origins. Also worth noting is the raised collar at
the neck, to help to protect the throat and the nape of the wearer.
The missing back plate was modeled on existing contemporary
archaeological findings (see photos below). The developed musculature
mimics once again the anatomy of an athletic male torso, with the spinal
column indicated by a shallow groove, which runs down the center.
All the edges of the plates (neck, arm, lower body) have been rolled
outwards, around a bronze wire, in order to prevent chafing and
discomfort.

Additionally, the nipples have cast from solid silver and are riveted
directly to the chest plate. No inset nipples have been observed on the
original finding, with only two identical incised circles instead. Another
minor modification is the attachment of extra ring fasteners to both sides
and a wave-like decoration, a practice which was rather common to this
kinds of artifact.

The bronze sheets (1,5 mm thickness) were formed exclusively with
traditional techniques (hot raising) and by the use of variety of hammers
and anvils. The padding is from thick sheepskin. 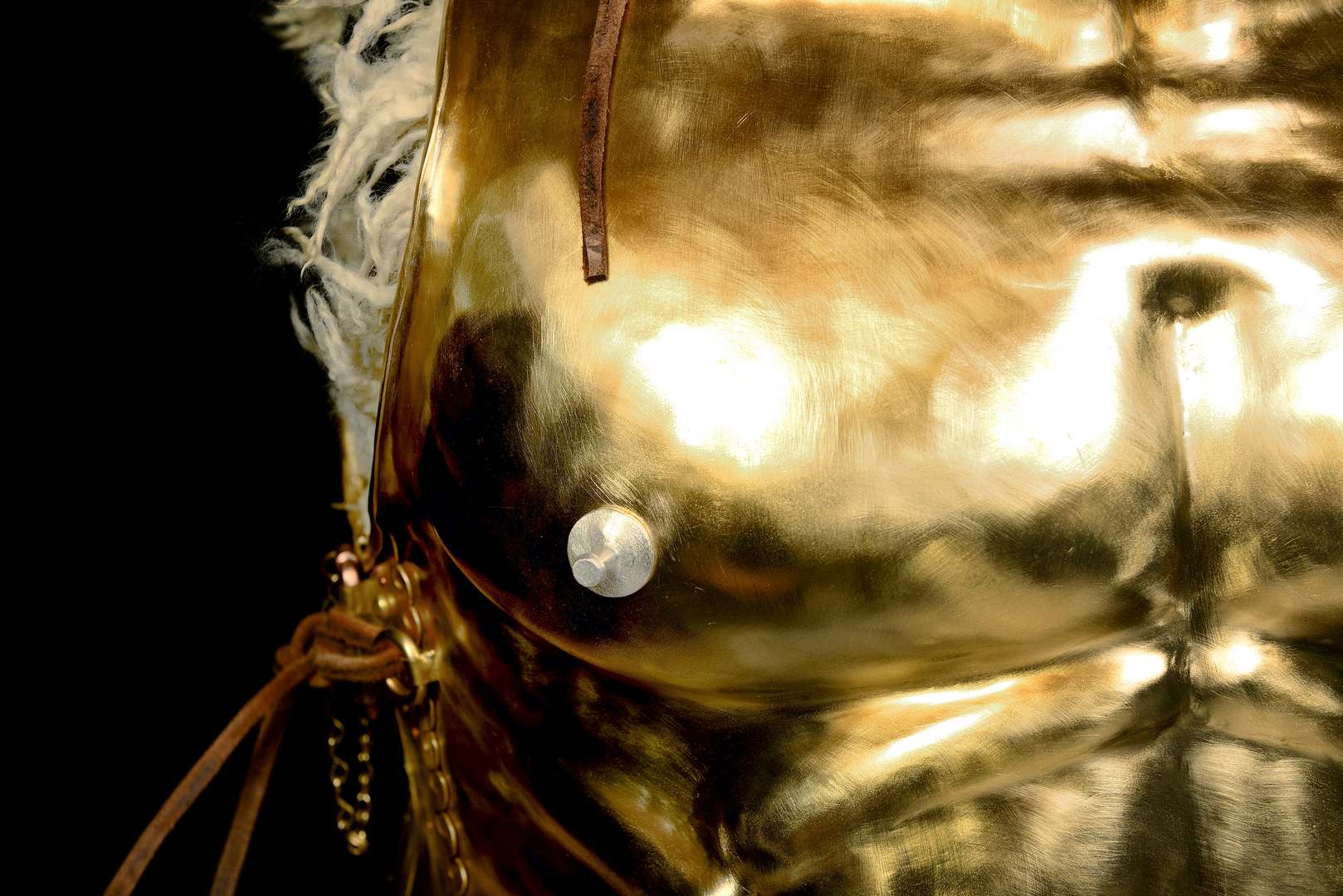 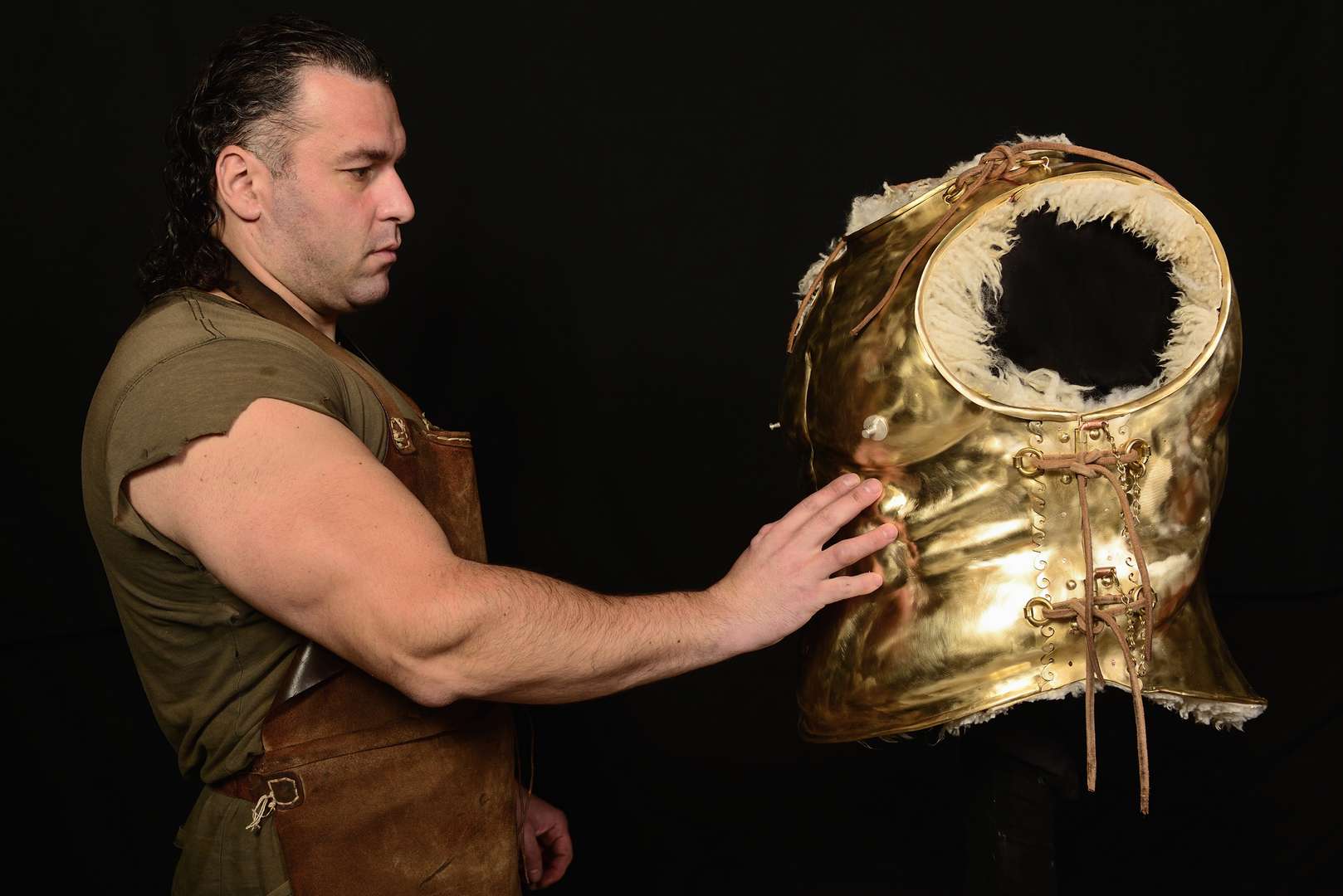 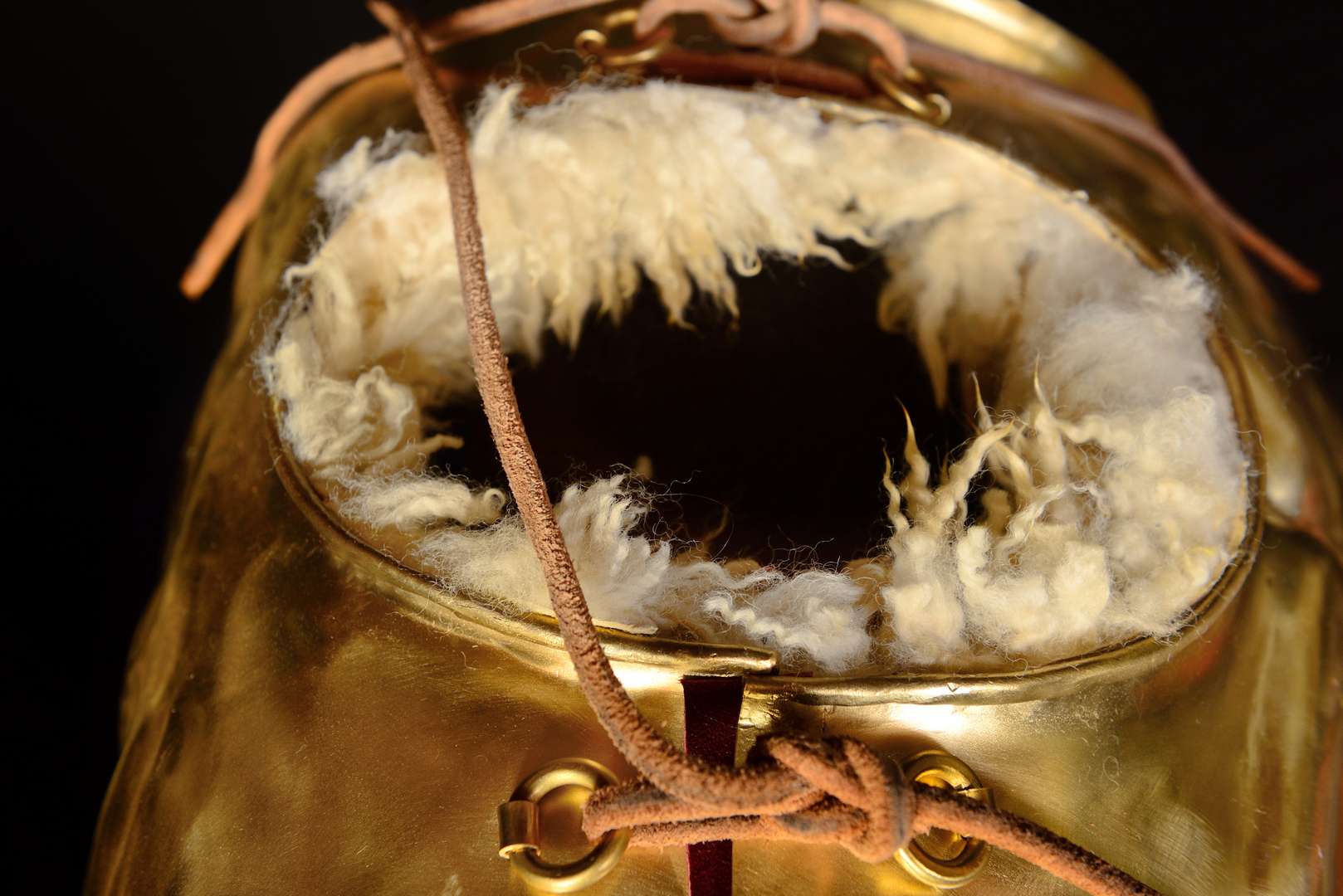 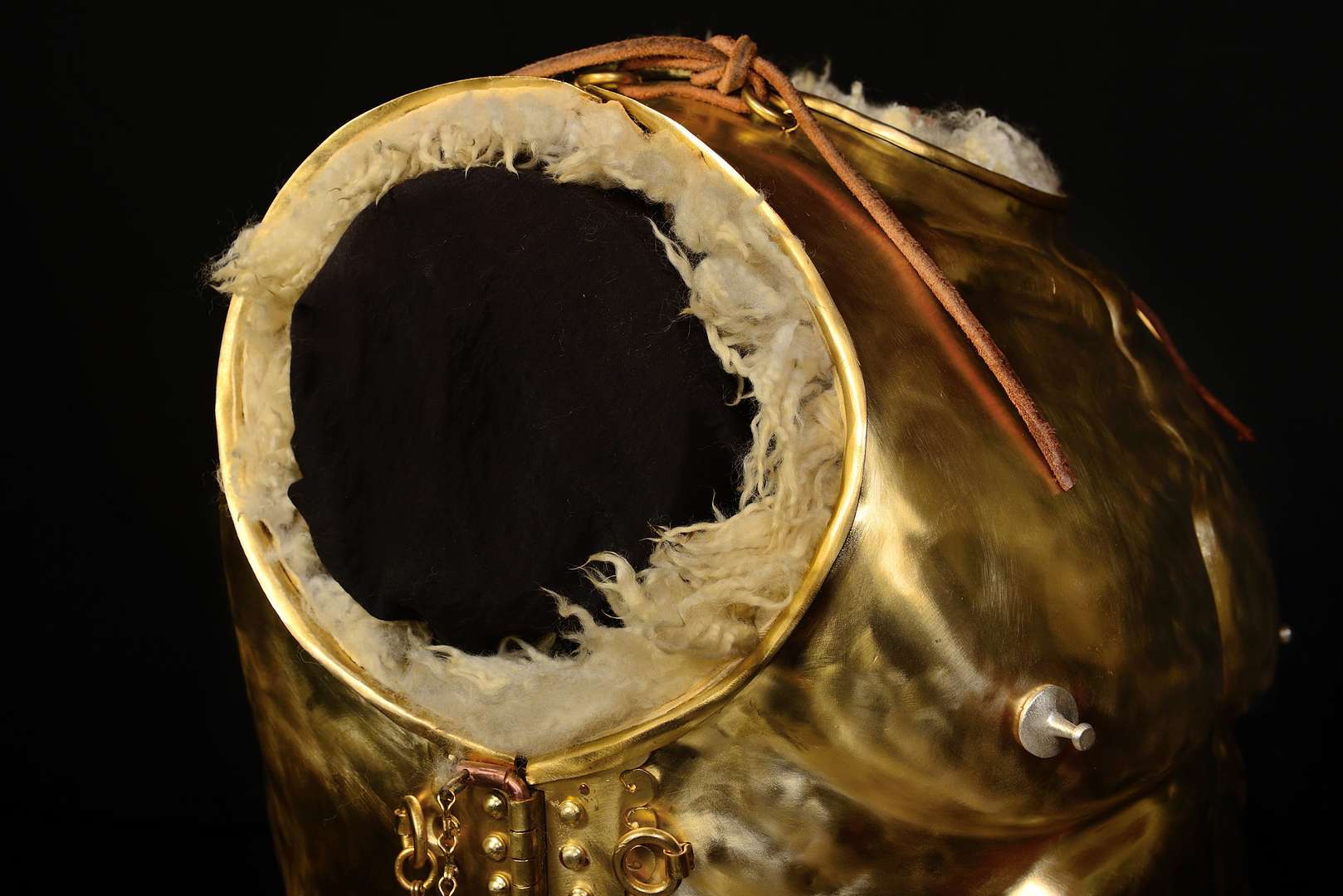 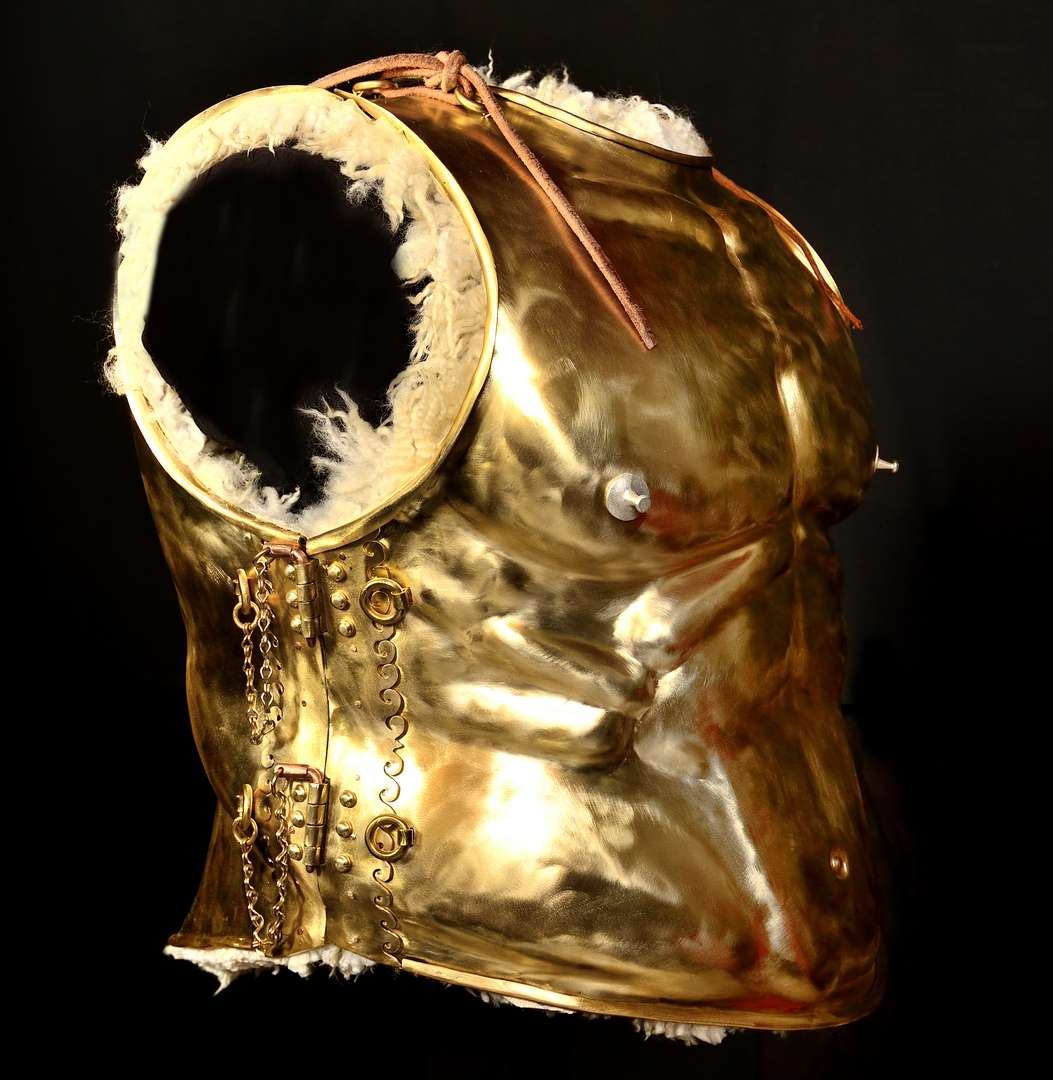 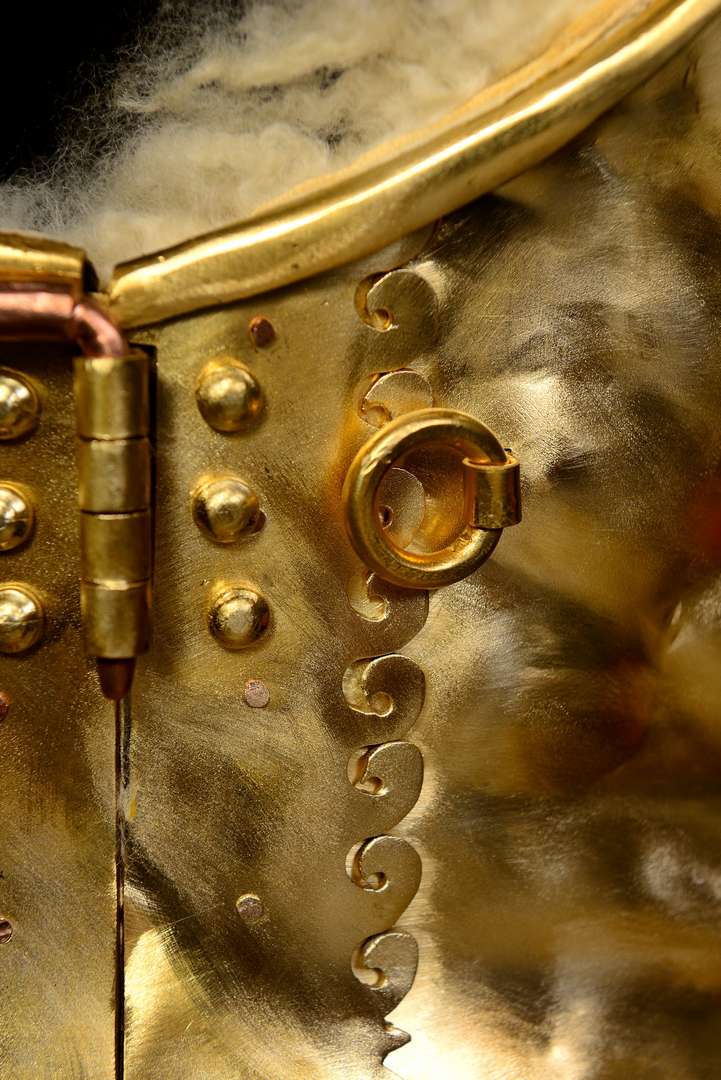 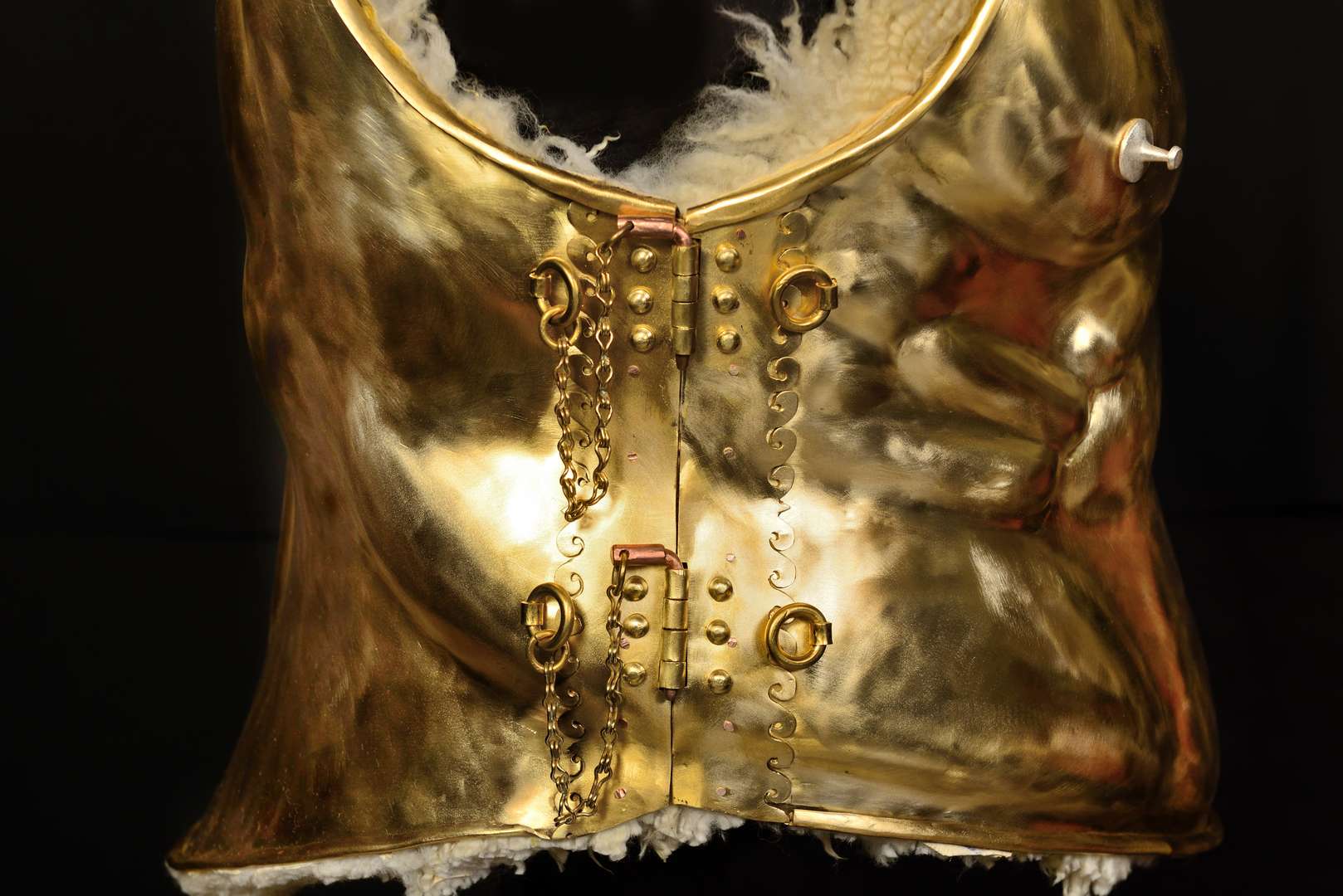 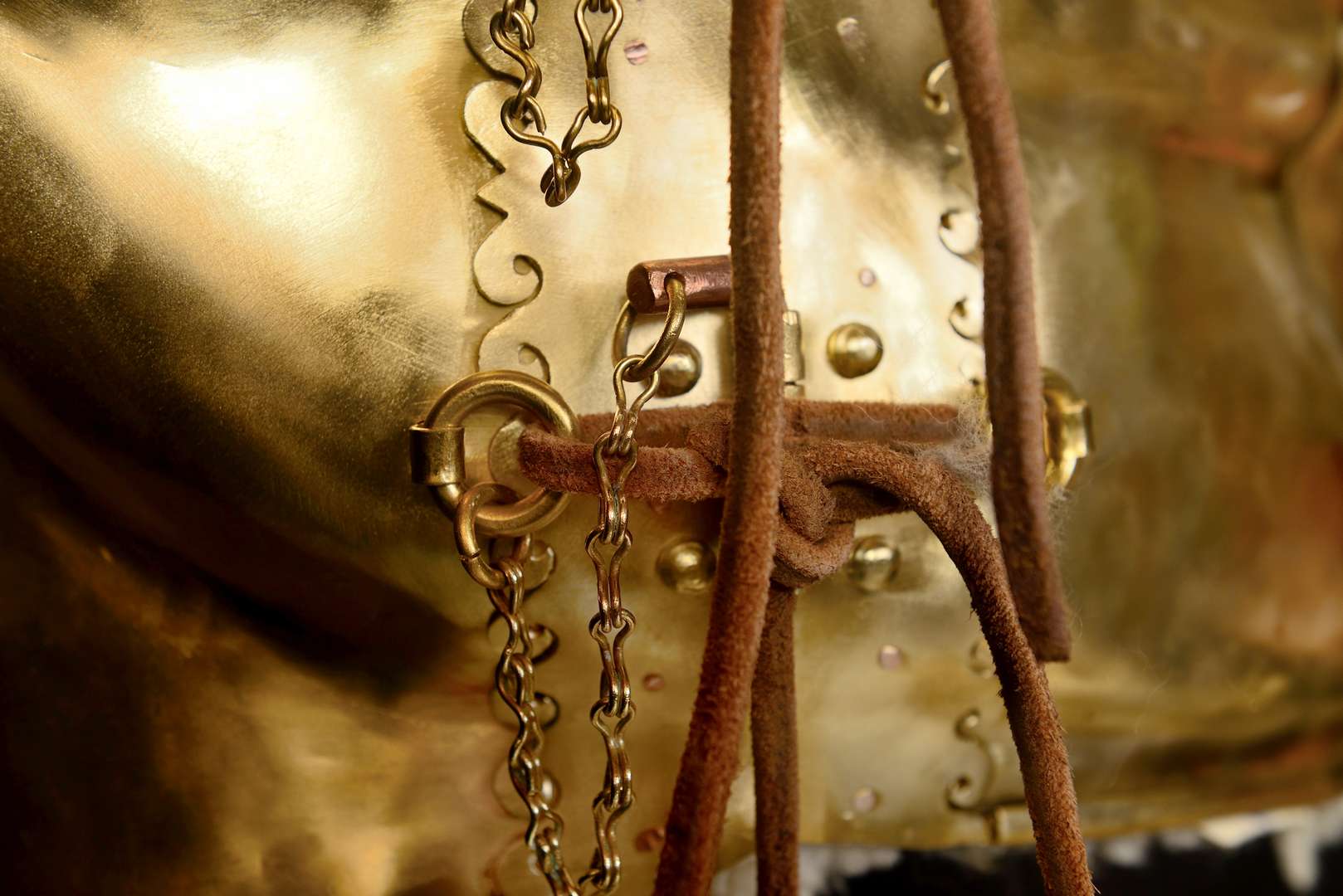 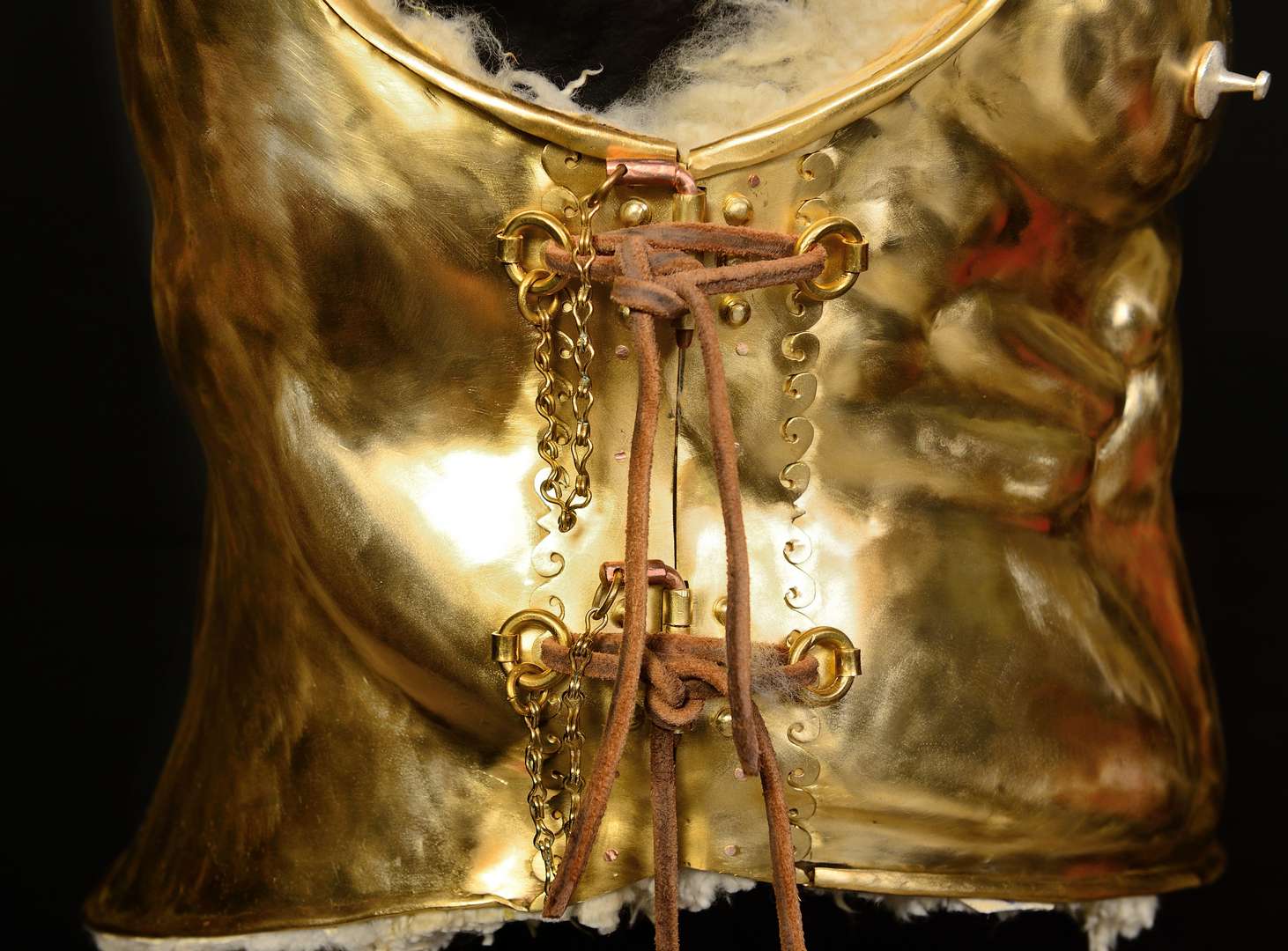 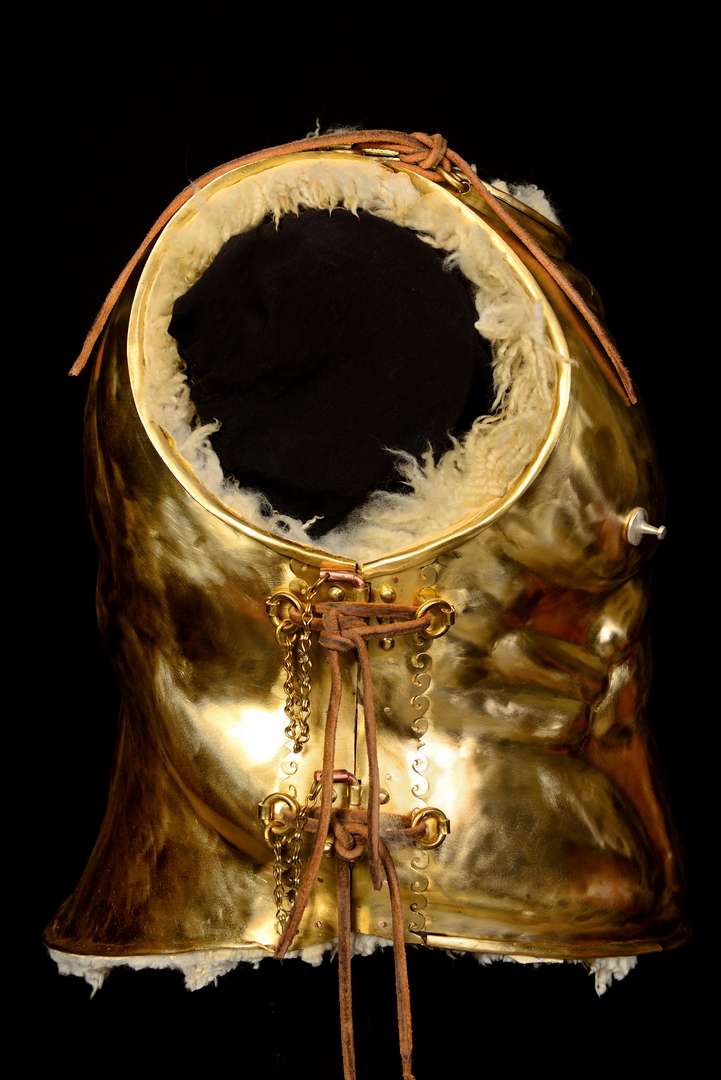 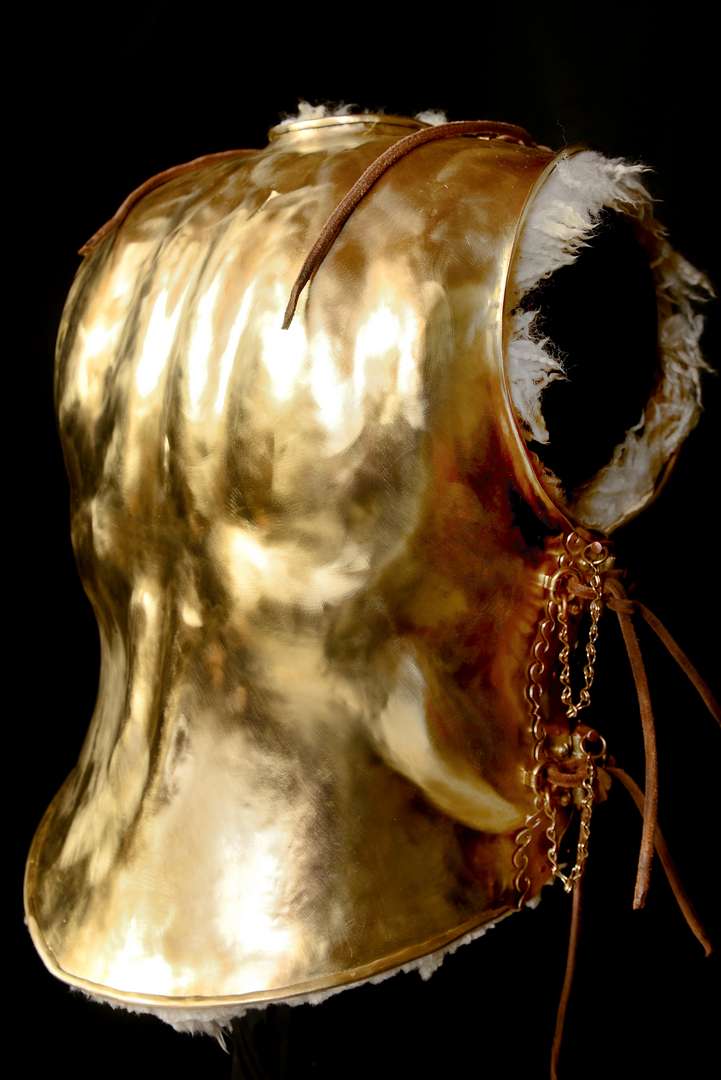 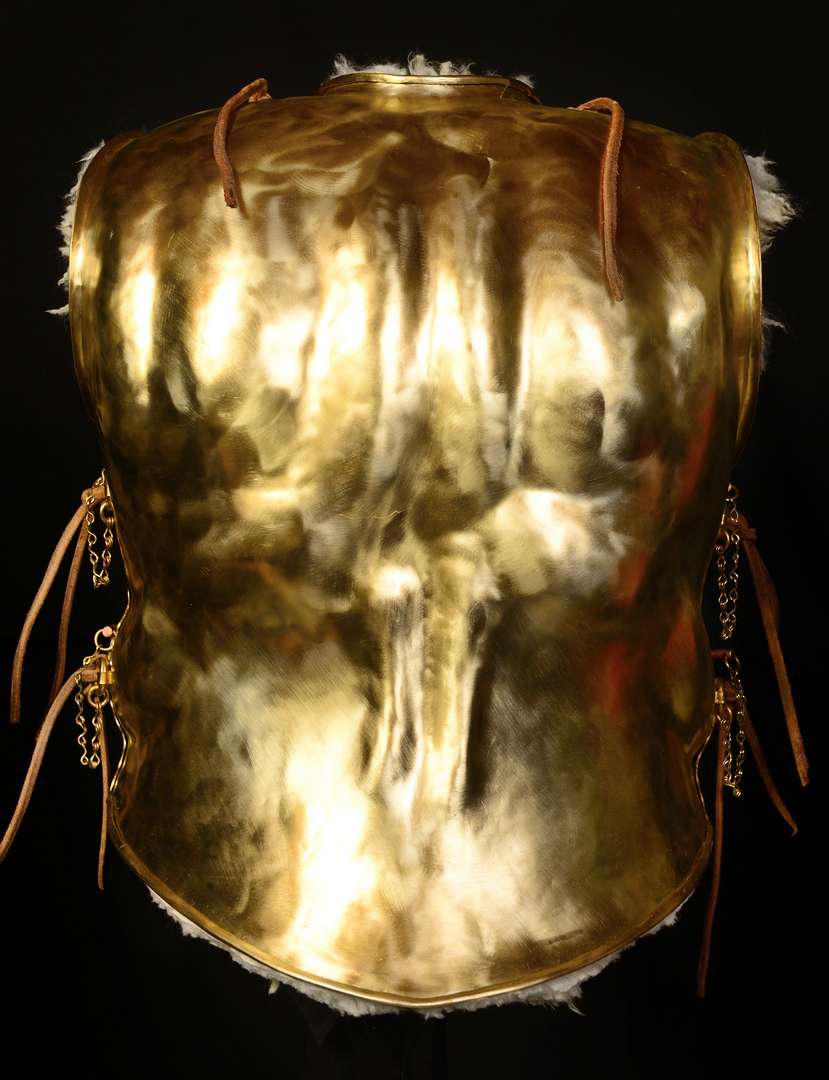 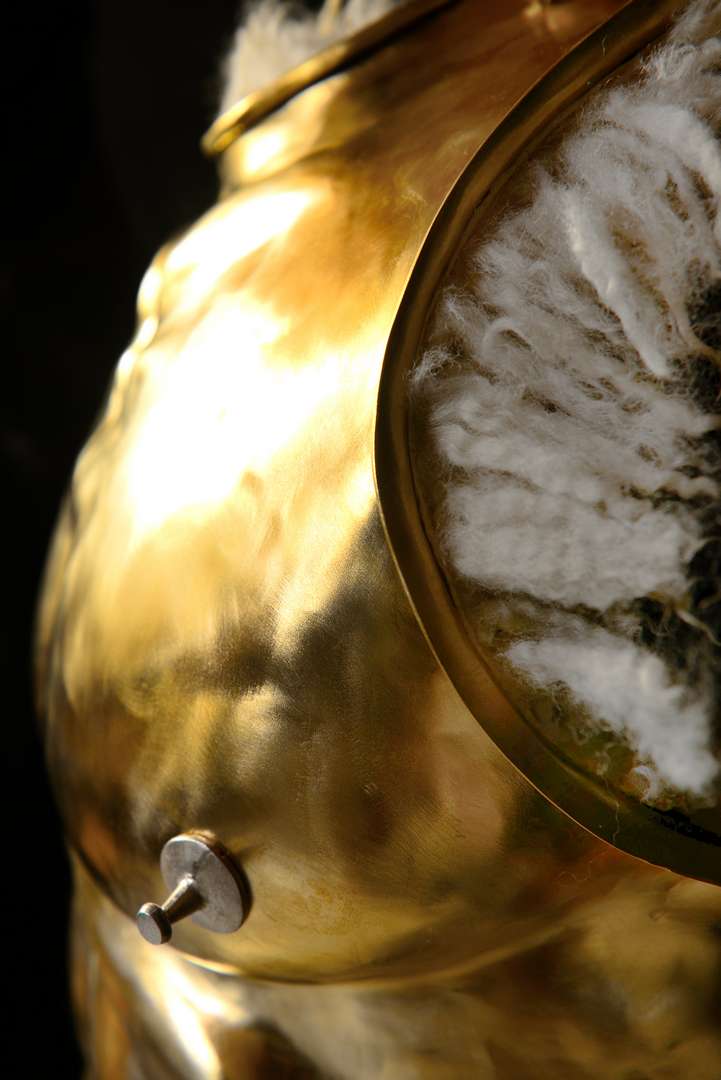 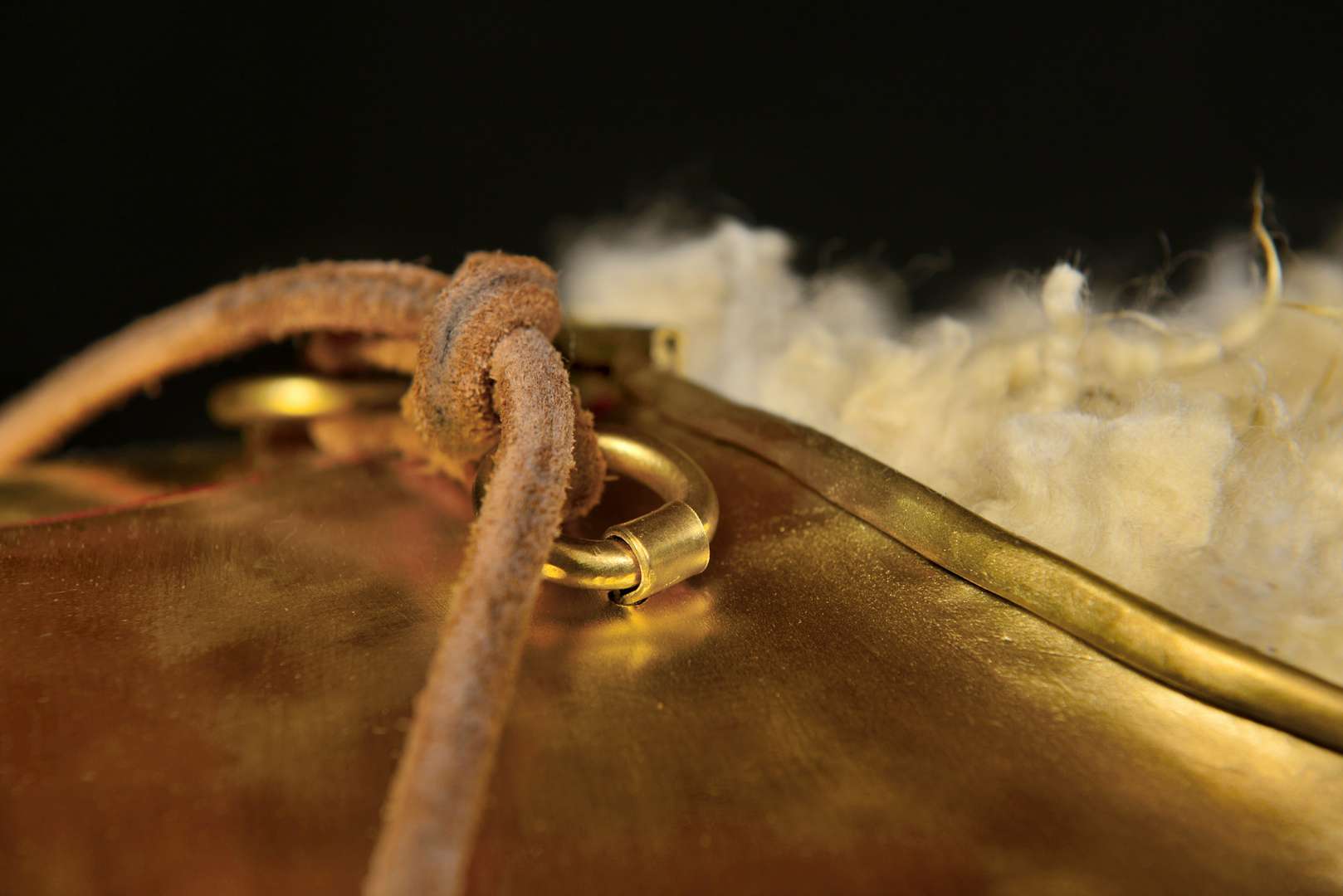 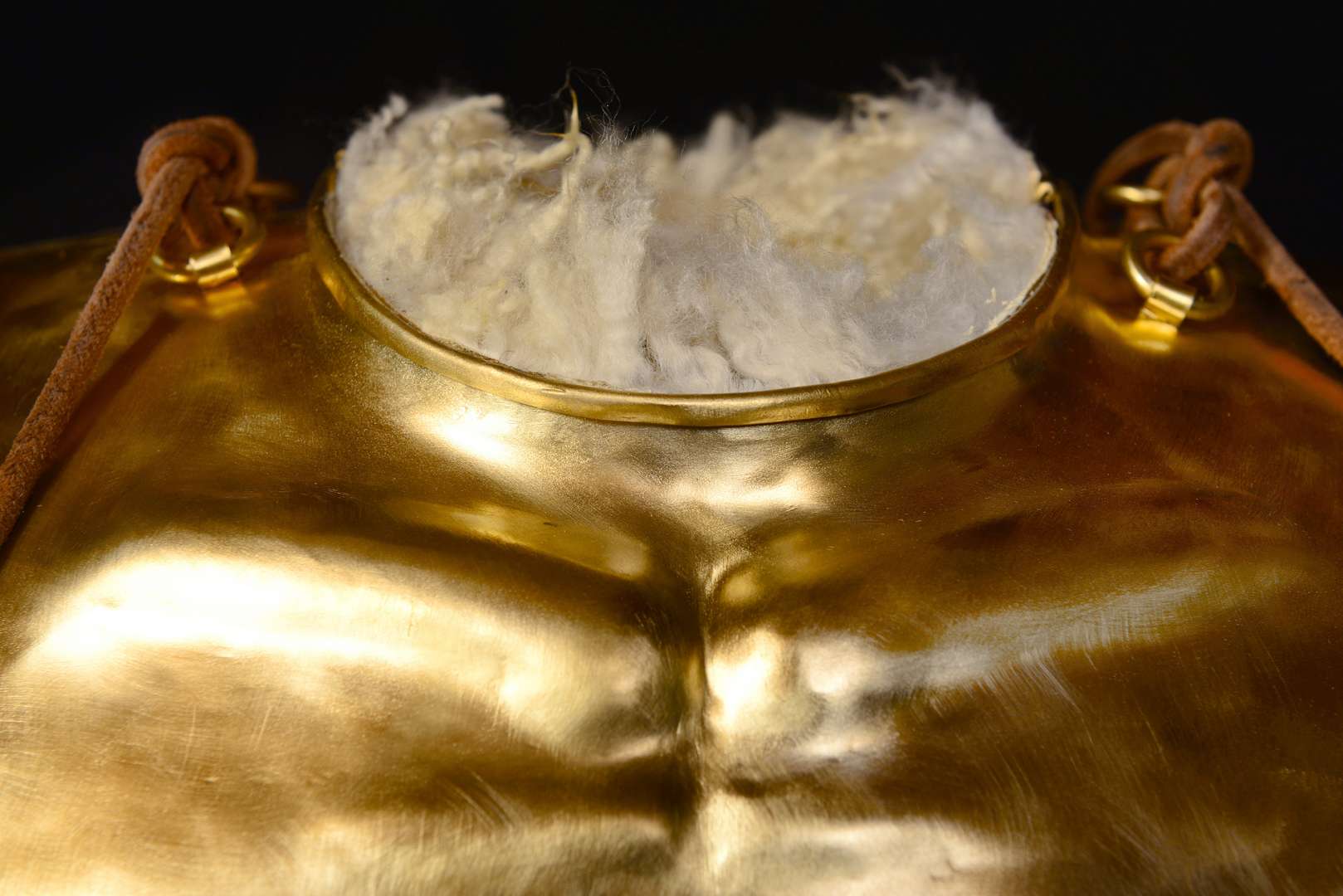 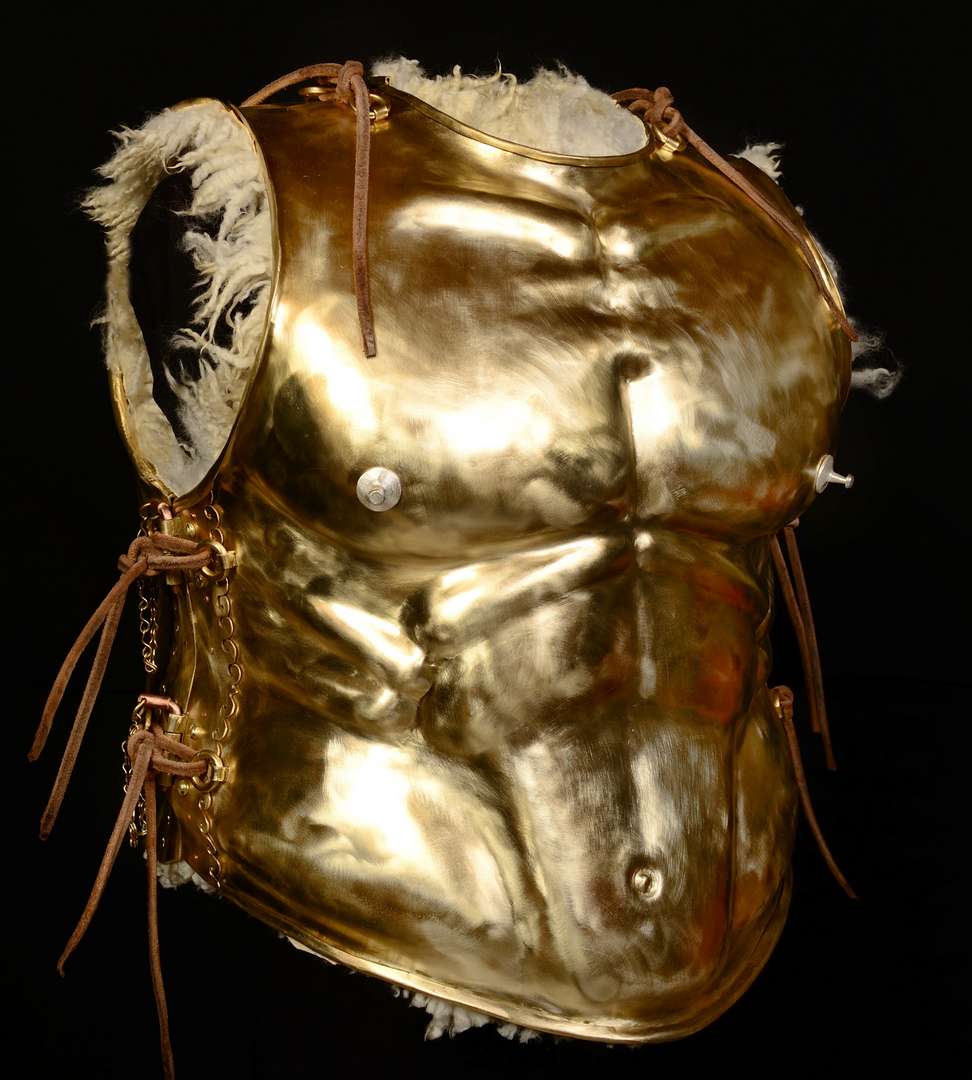 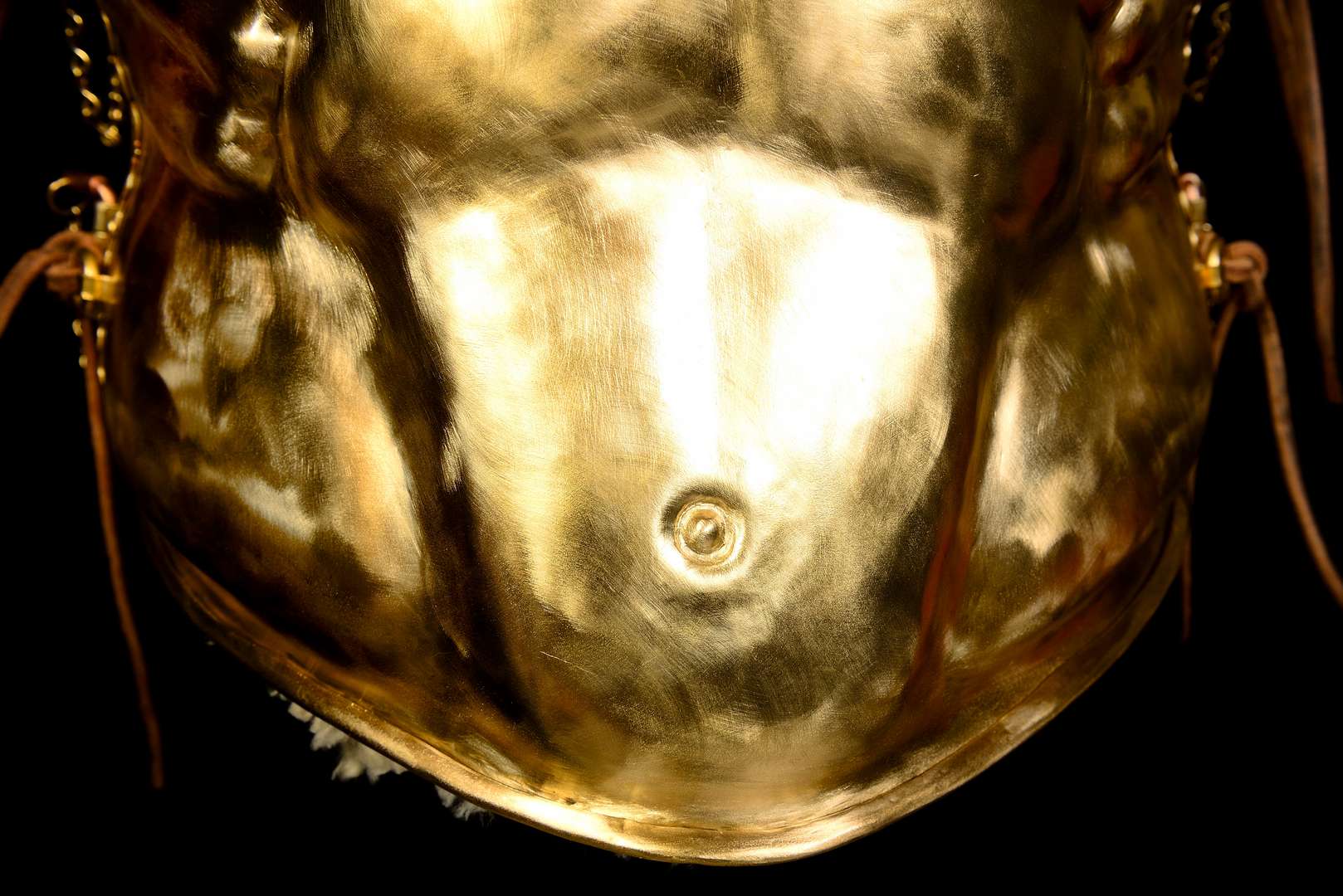 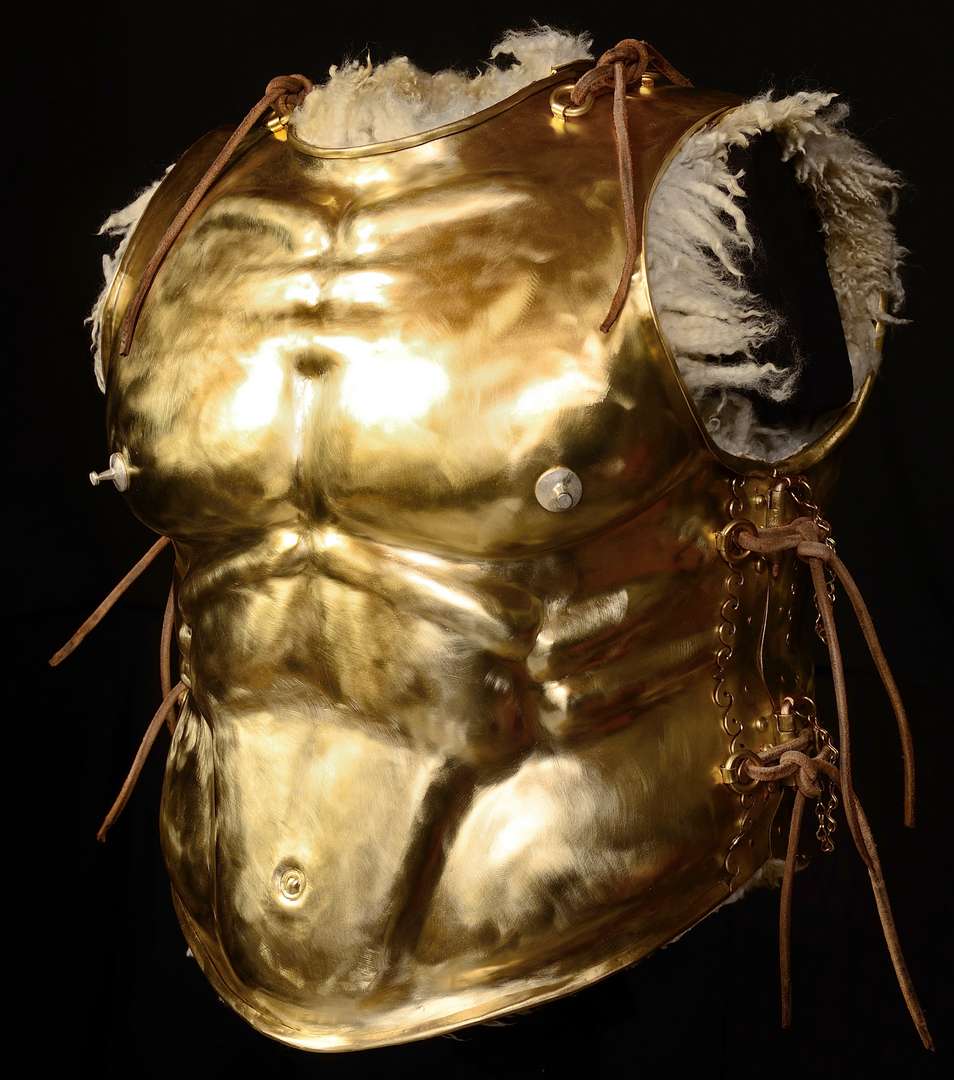 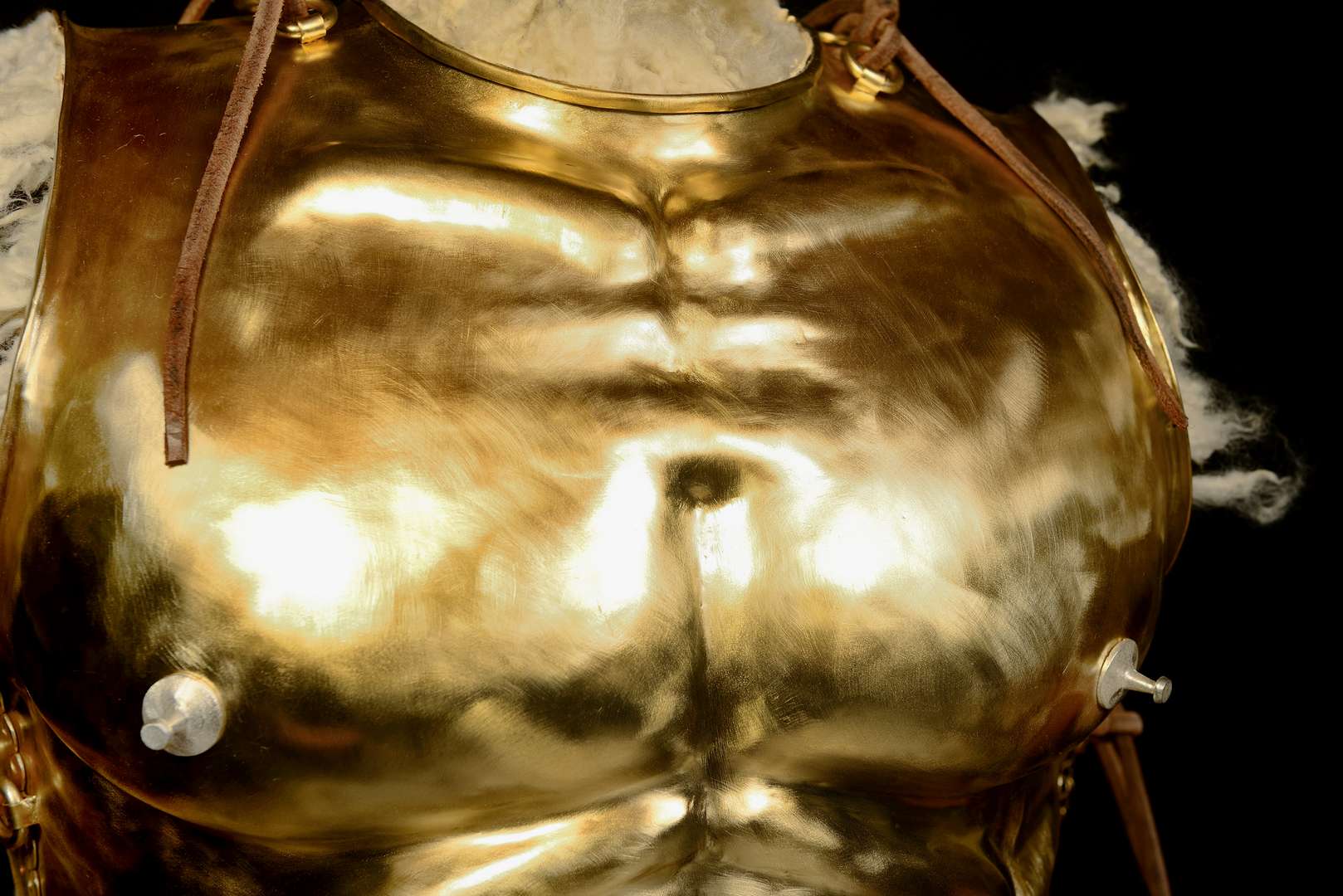 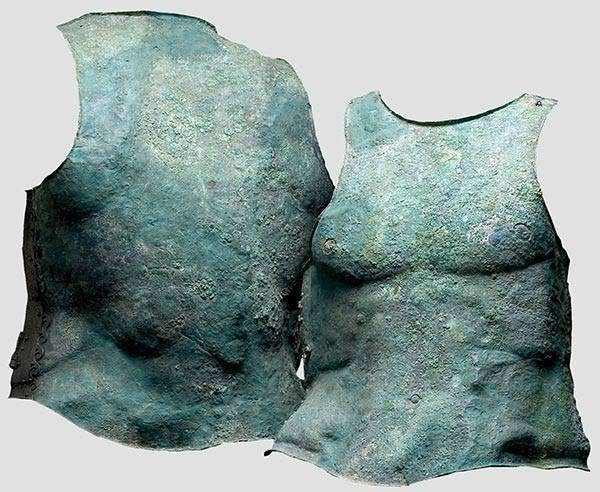 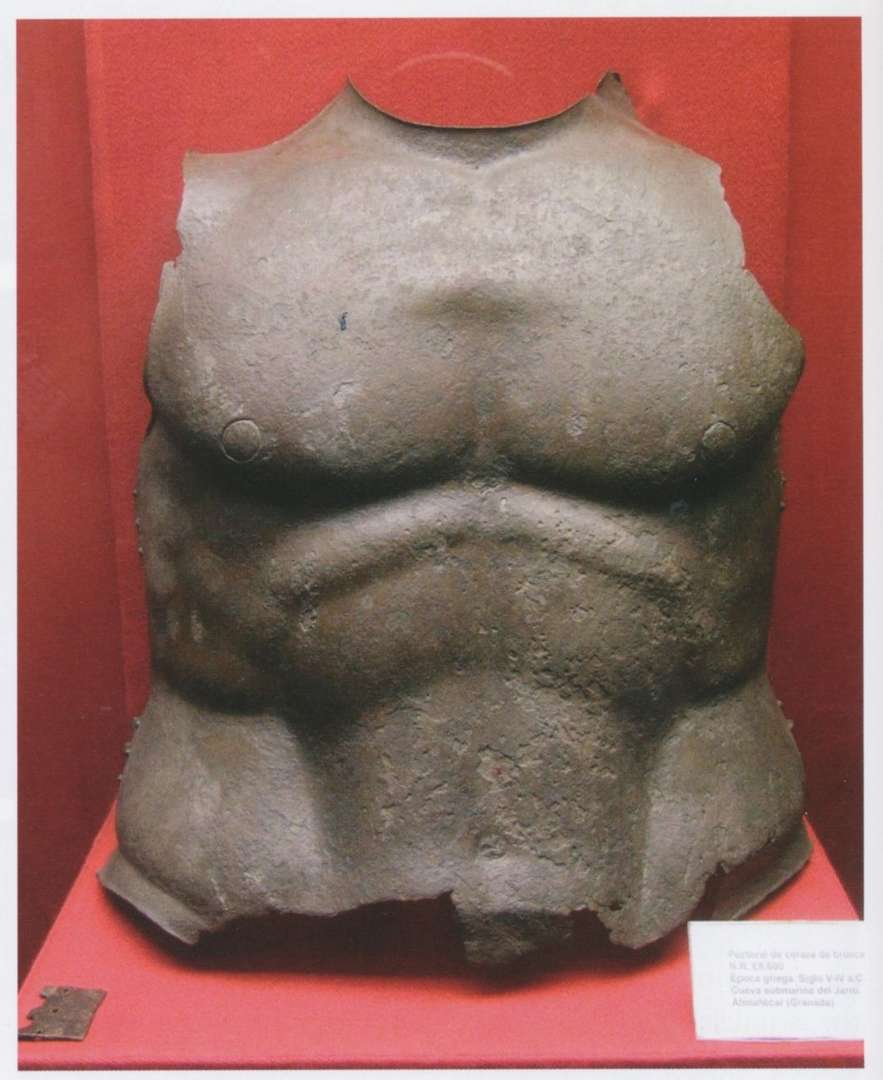