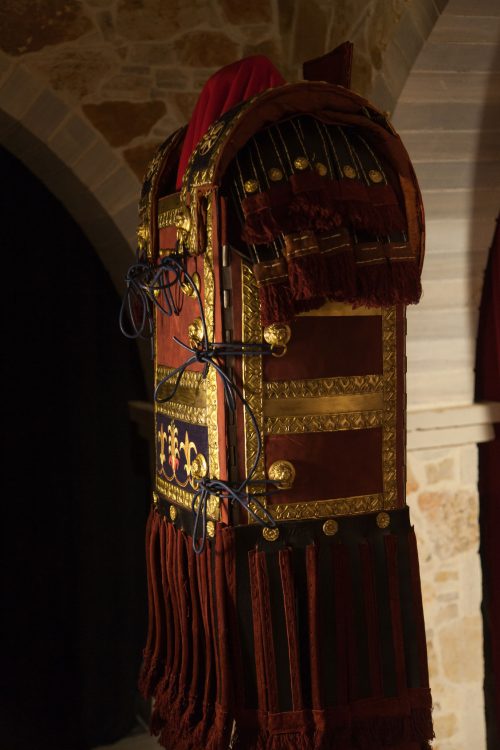 Philip II was King of Macedon and the father of Alexander the Great. At his death (336 BC) the
king was buried with a royal ceremonial under the Great Tumulus in Vergina. It is fortunate that this
truly monumental tomb was never plundered and was unearthed in 1977 by the renowned Greek
archaelogist Manolis Andronikos, making it a worldwide sensation.

Among the grave findings of the Tomb II was an impressive suit of armour, which, given the unique
body form of the wearer described in ancient texts, most probably belonged to Phillip personal atire.
At present the fully restored armour is displayed at the underground Archaelogical Museum at Aigai
which has been designed and constructed so as to preserve the authenticity of the royal tombs of
that era. It is in fact a modern tumulus-shaped shelter built to cover the original cluster of royal
tombs.

The main body of the suit is made of iron, in seven anatomical shaped plates securely connected
between them with long, vertical and horizontal hinges. It is obvious that it was designed to
resemble the basic structure of a Linothorax i.e. with upper shoulder pads (epomides), main body
corselet and double row of leather pteryges for the lower body and groin. The two long flaps at the
shoulder, the epomides, also cover the wearer’s neck areas bending over the top to latch onto the
upper part of the chest area. Two horizontally arranged hinges in bronze (the originals were made of
gold) connect the iron bases of the flaps with the sizable dorsal plate. Lion-shaped bronze rings are
rivetted at the ends of each of these. Purple leather is used to embellish the external surfaces of the
epomides as well as all external rims, together with a delicate, narrow bronze band with embossed
Lesbian ornaments. The front area bears the Royal Sun emblem from Vergina handstiched of pure silk.

All the plates are manufactured with the hammered technique to conform to a curved anatomical
shape of the short, round body. The lower half of the right side plate bears an embossed depiction of
goddess Athena. The other half, on the front, bears a floral decoration in silk copied from Phillip’s
funeral box, while the upper half has a pair of stylized lion rings fitted. On the left side there are two
more identical pairs of lion-shaped bronze rings also fastened horizontally. Finally, the upper curved
section of the back plate bears a silk panel consisting of three blue margarita blossoms, copied once
again from the King’s treasury. All inner surfaces have been padded with wool and silk.

Two rows of narrow leather strips with fringe decorations are attached to the rim of the cuirass,
enabling freedom of movement along with protection for the groin and thighs.

The pair of bronze greaves have been recreated using traditional techniques from an example found
in the same chamber of Tomb II, next to the suit of armour. The extra decorative elements (external
leather, silk decoration and padding) were included by the artist in his attempt to restore the thorax
to its full glory. The suit offers a glimpse into the luxurious royalty of ancient Macedon 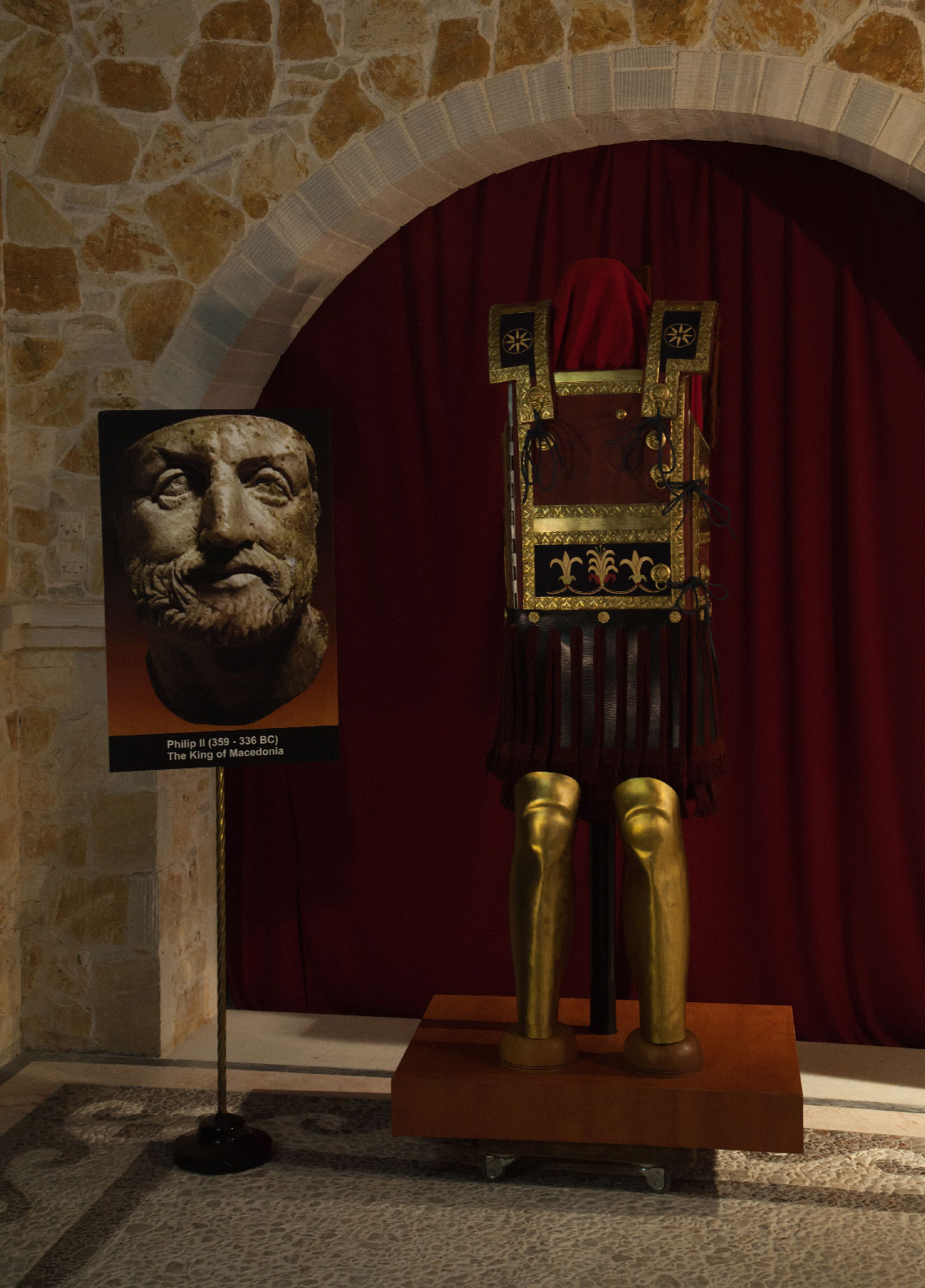 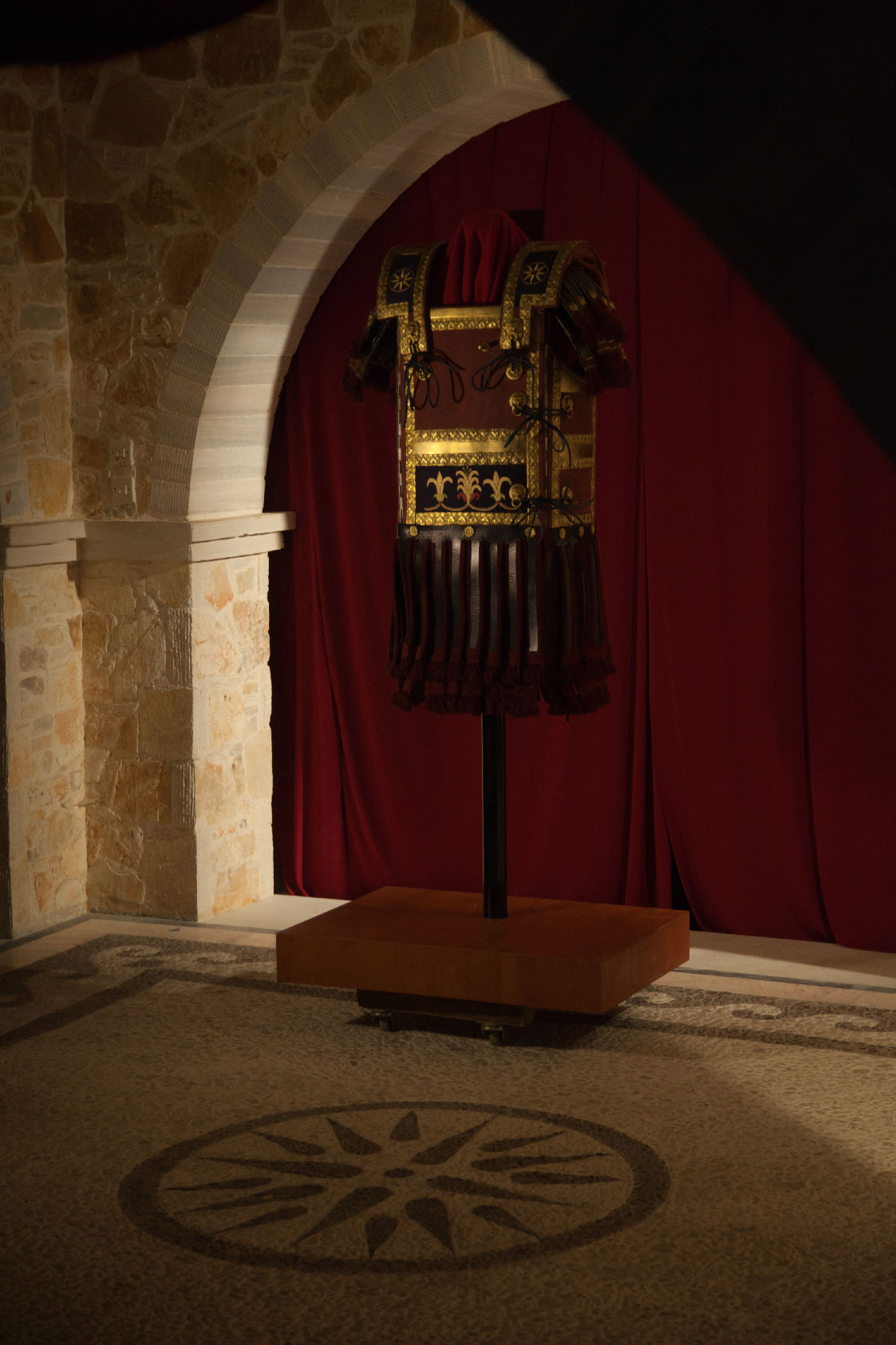 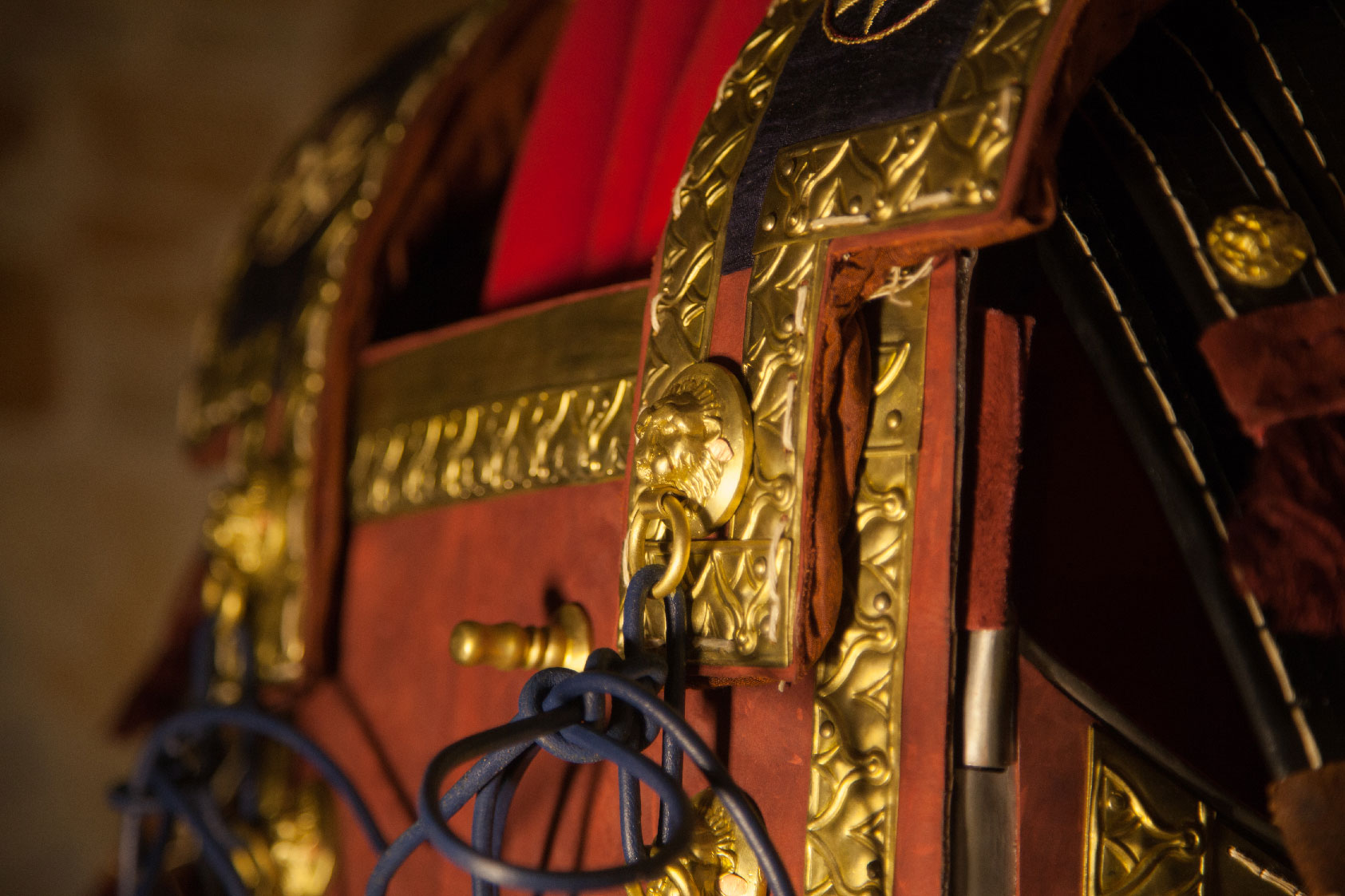 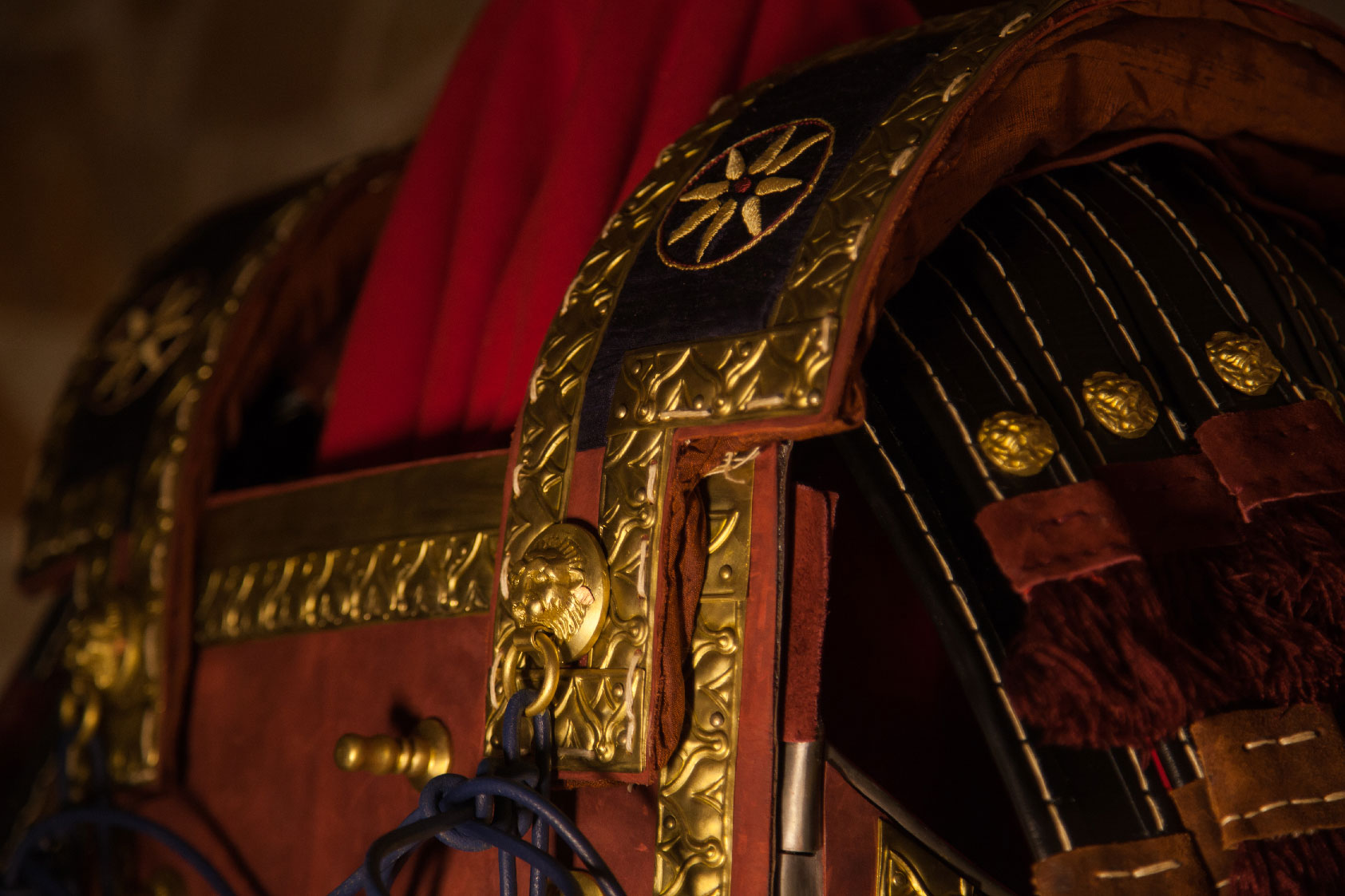 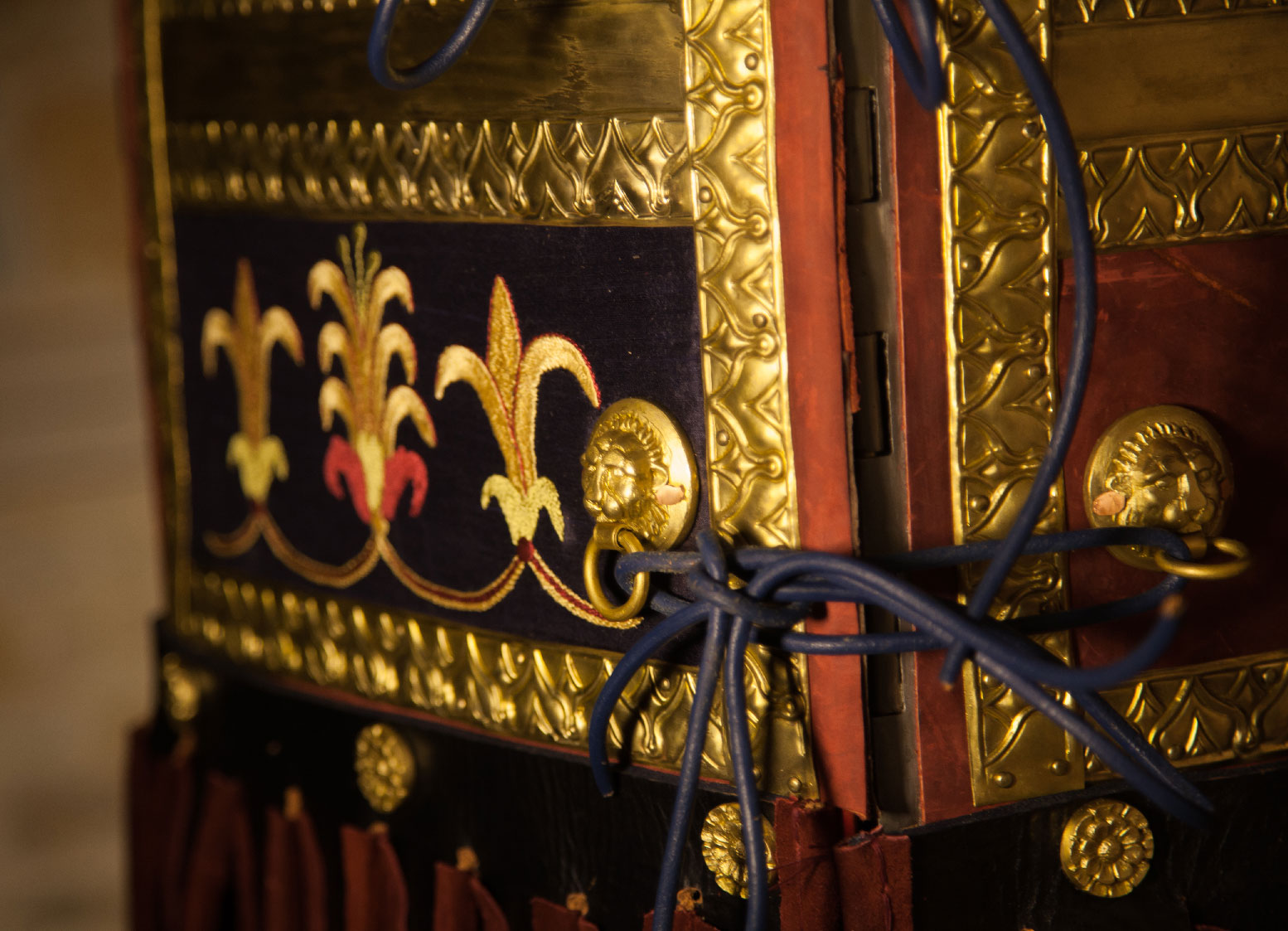 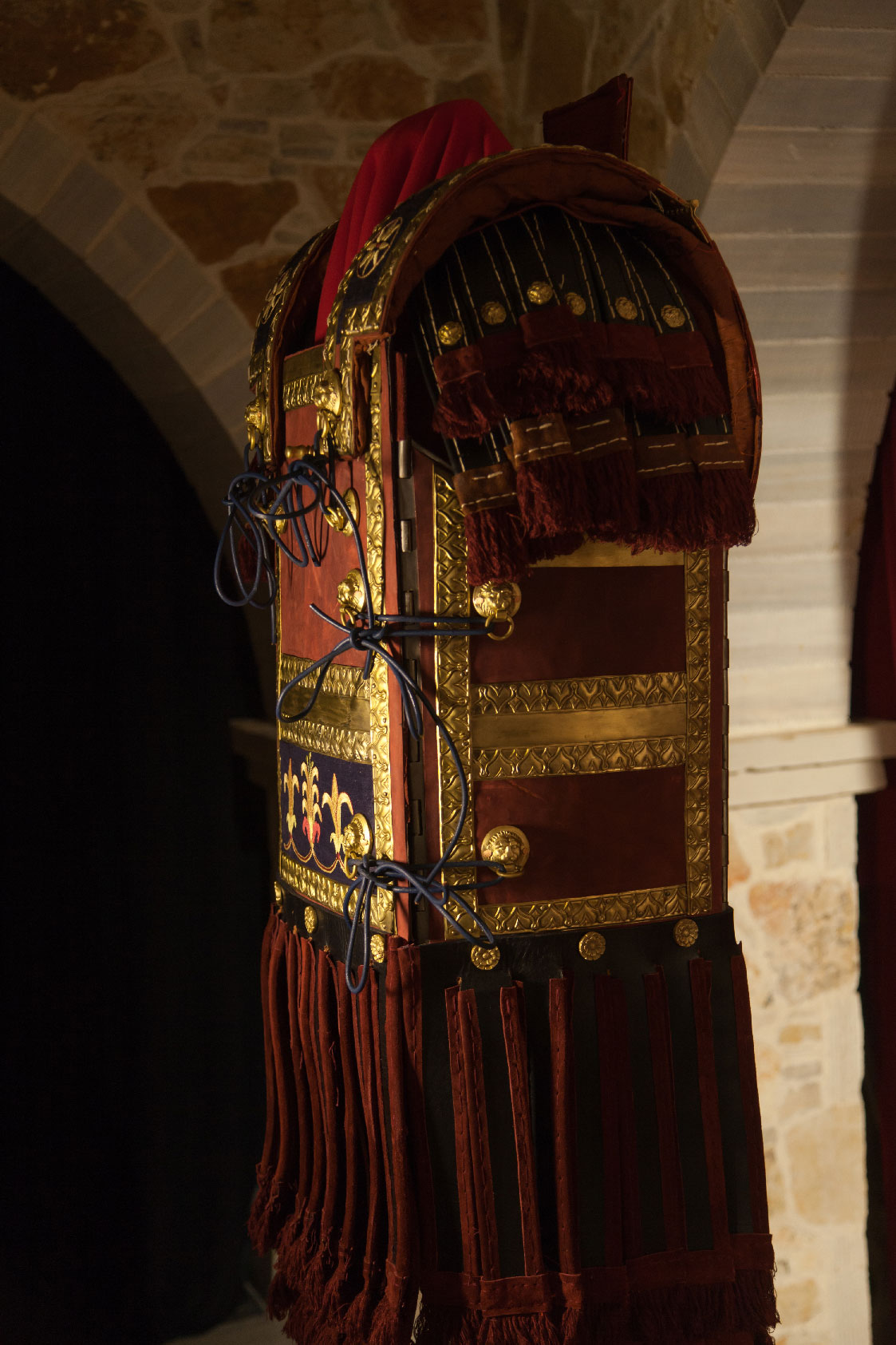 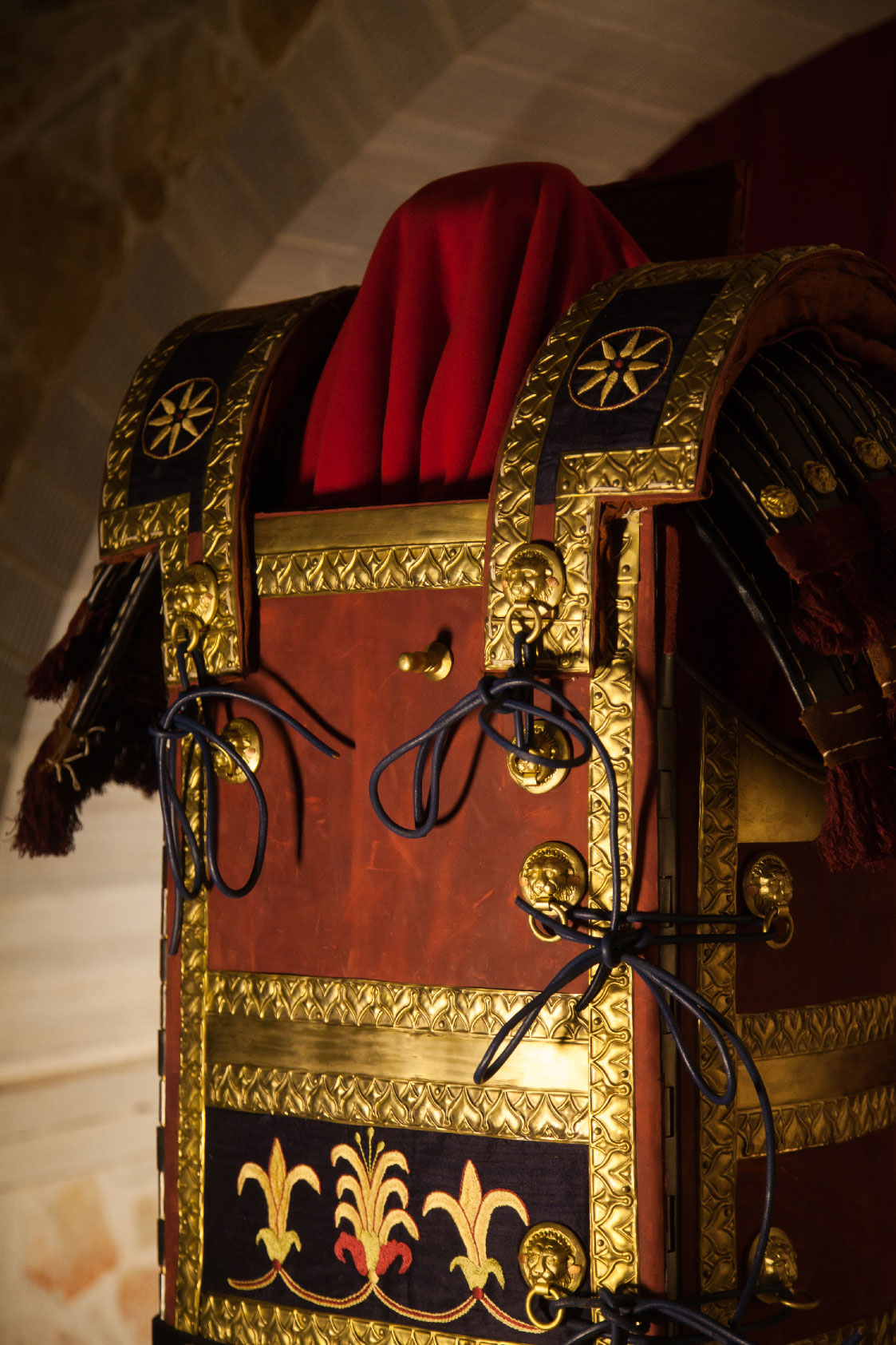 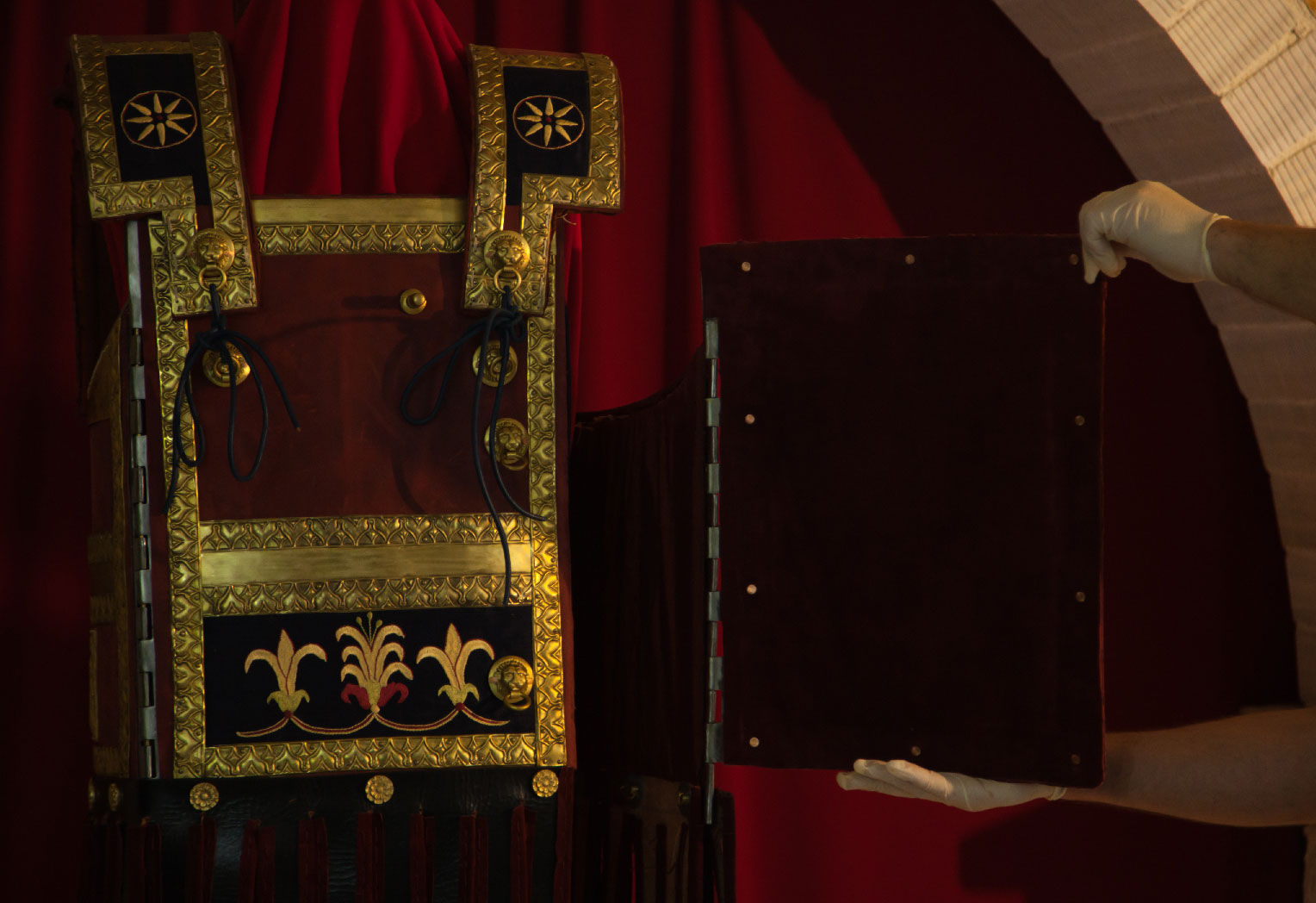 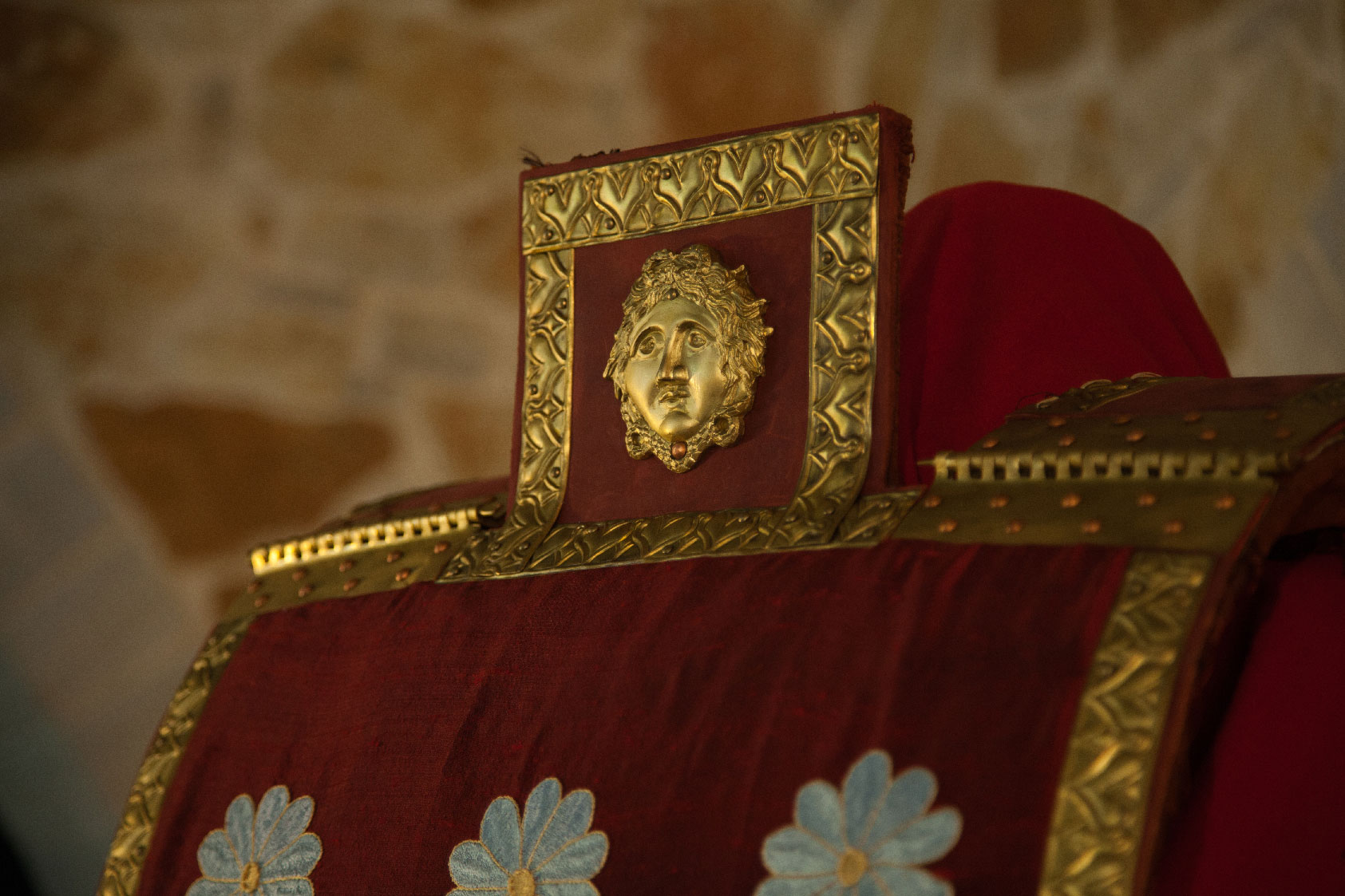 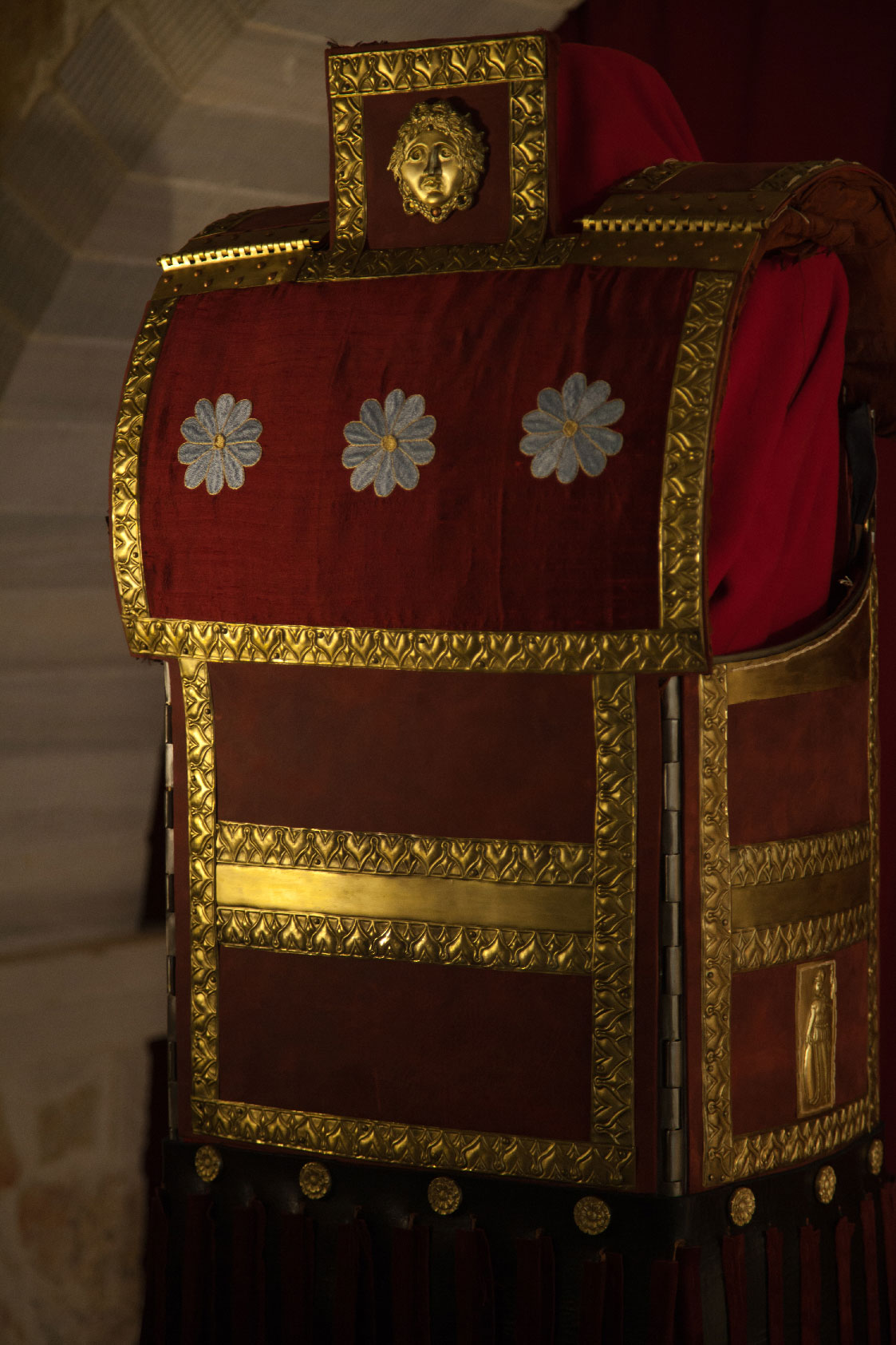 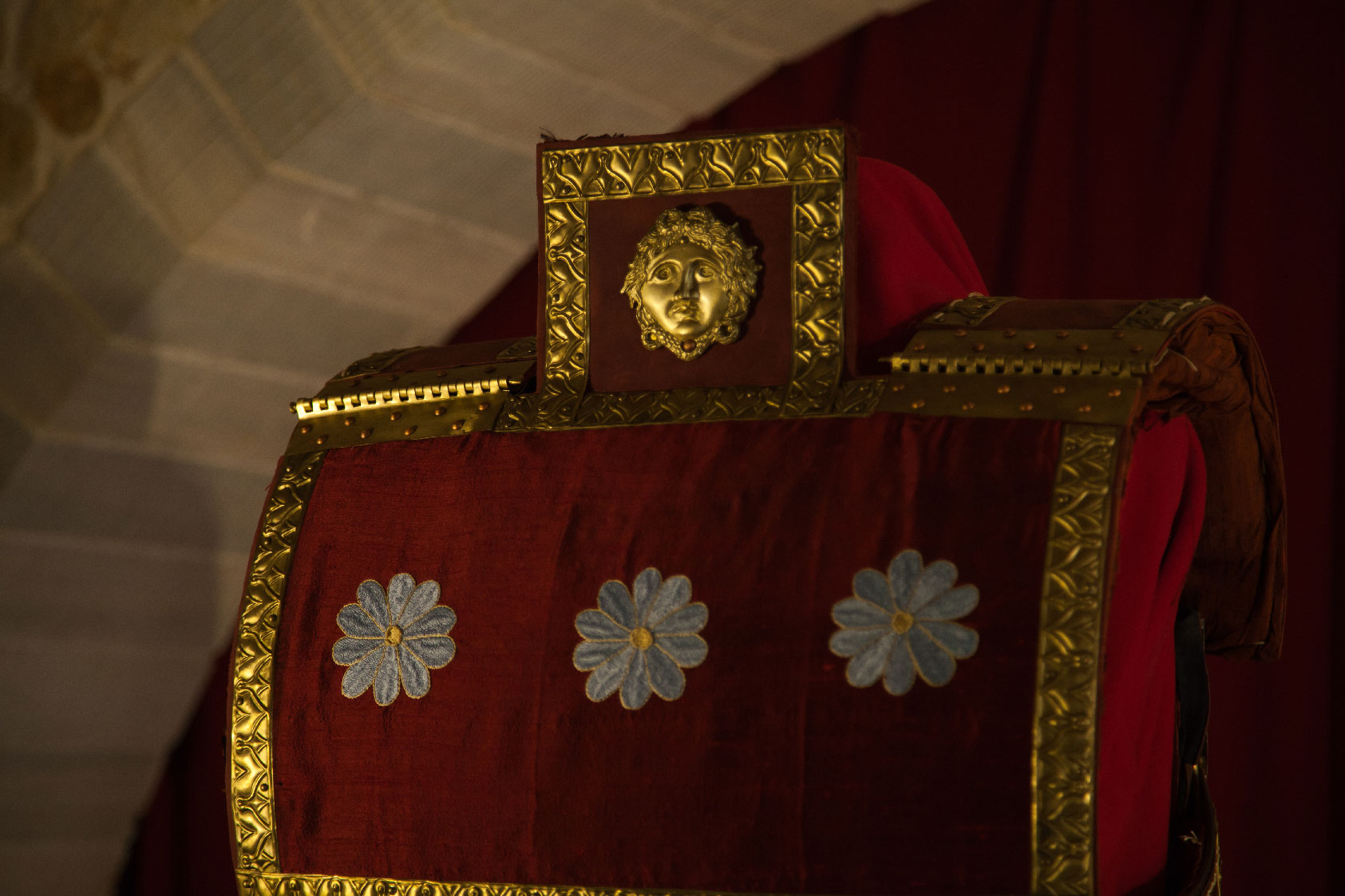 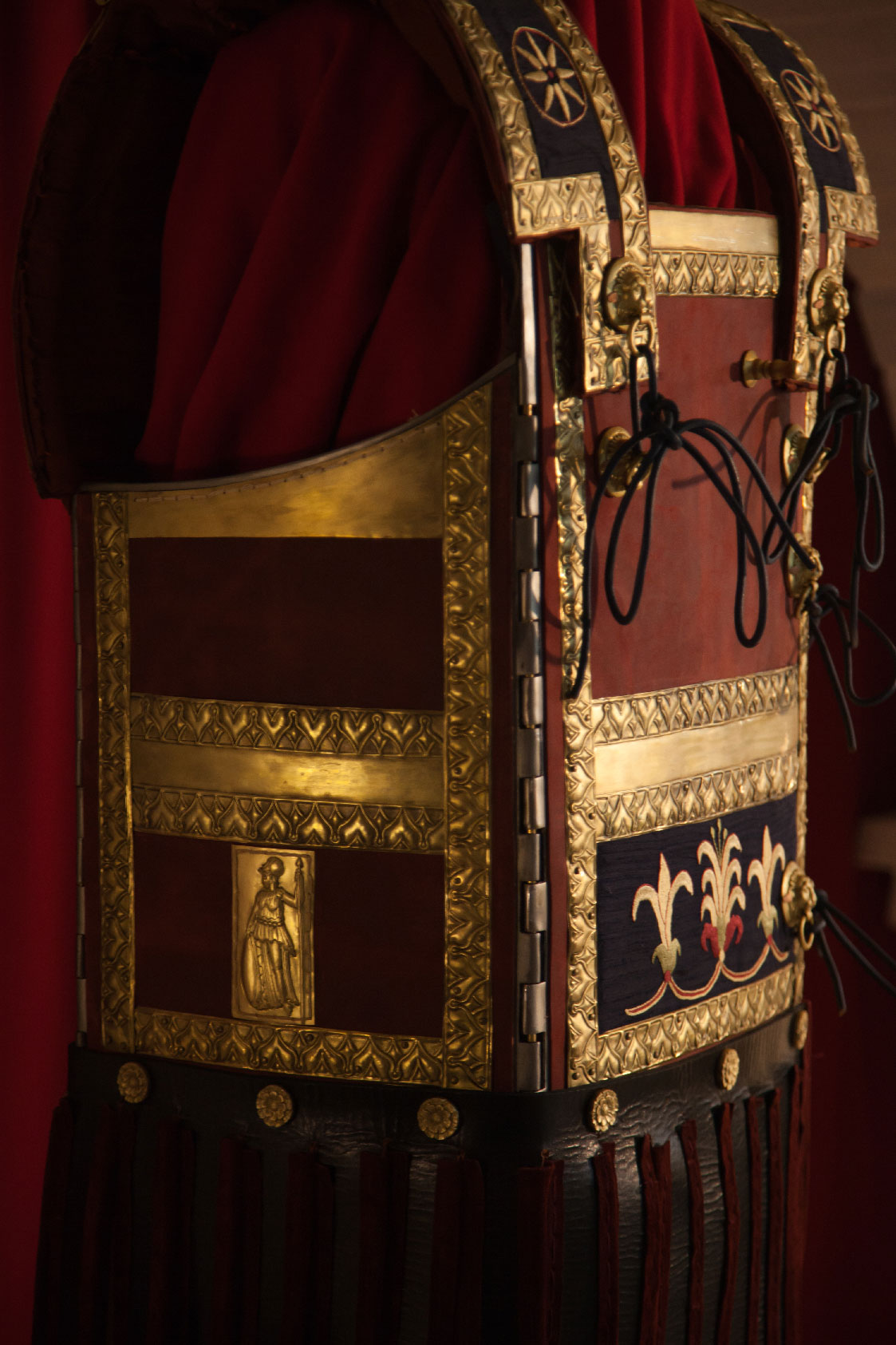 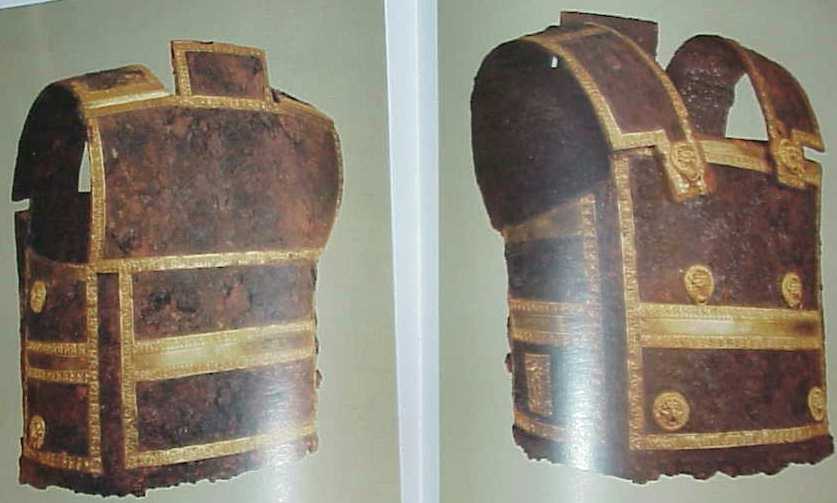 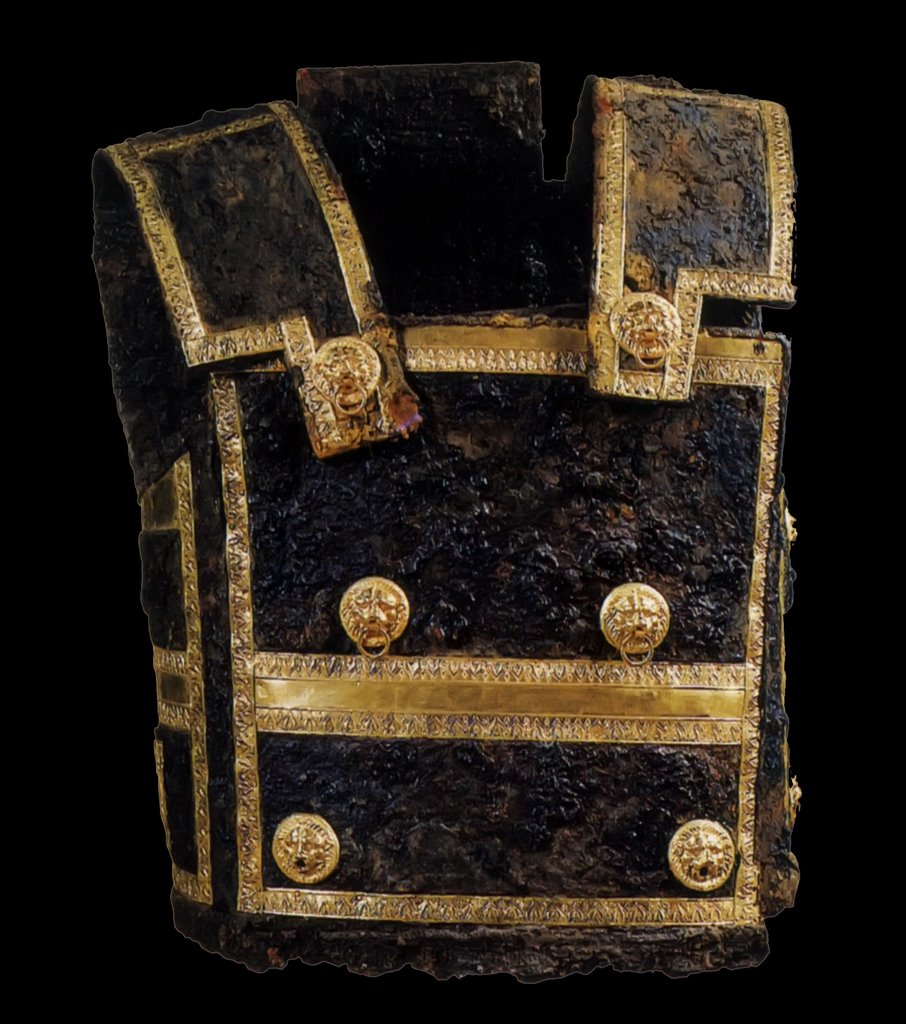