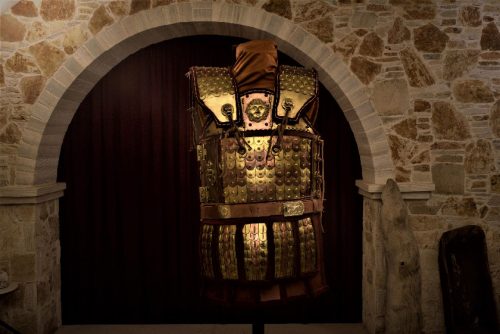 It is also mentioned in other sources such as Herodotus (2.182, 3.47, 7.63), Livy (4.19.2–20.7),
Strabo (Geography, 3.3.6, 13.1.10) and many other minor sources. Apparently is was made primarily
out of layers of linen cloth glued together to form a relatively stiff but lightweight cuirass,
which was infinitely more comfortable to wear than a metal one.

Gradually replacing the popular bell and later muscled cuirass, linen armour became the
standard defensive gear of the Greek city state hoplite armies. By the time of the catastrophic
Peloponnesian War it was in use in several variations and minor typologies, something that did
not change for the next half millennium, seemingly flourishing well into the Hellenistic
Kingdoms.

There are numerous surviving depictions of linothorax-wearing warriors from antiquity in vase
and tomb paintings, wall frescoes and sculptural reliefs which have been unearthed in Greece,
Asia Minor, the Middle East etc. Its high point in artistic depictions corresponds with the time of
the Persian Wars (early 5th century BC) a fact that attests its important contribution to the
Hellenic victory against the mighty Persian empire.

Τhe depicted linothorax is a fine example of quality craftsmanship and has been inspired byhe top shoulder
protection (epomydes) covers the upper back and shoulders and is tied down to the chest area.
It consists of a thick linen background that has been covered with approximately 400 bronze,
ridged scales (of two types). These are strongly attached with bronze staples on the fabric substratum
thus providing unified protection with overlapping small bronze pieces.

Three bronze and copper rectangular plaques have been fastened under the right armpit,
connected with pairs of hinges. These serve to protect the armour’s exposed side from enemy
blows. Cast bronze floral and dragon ornaments have been riveted on them in a symmetrical
pattern. Α pair of rings are attached at the front upper area and serve as “twin” attachment
points for the flap arrnagement. On the left there side are four pairs of loops to enable the
thorax to be fastened and locked horizontally. On the chest are affixed three anatomical bronze
plates linked together with hinges and bearing in its centre a bronze decorative apotropaic
gorgoneion to ward off spirits. The inner part of the corselet is lined with wool and linen fabric.

Two overlapping leather rows, the pteryges, have been attached to the low rim of the cuirass to
protect the abdominal and thigh areas and enable sufficient freedom of movement for the
wearer. The outer strips have been covered with overlapping, ridged, rounded scales in bronze
and copper, arranged in three distinct vertical rows. These have been attached to the leather
backing with wire threaded through pin holes in the scales. A second, longer row of leather
strips has been placed under the above. All the rims of the strips have been folded with handstiched
purple leather for decorative and functional purposes. 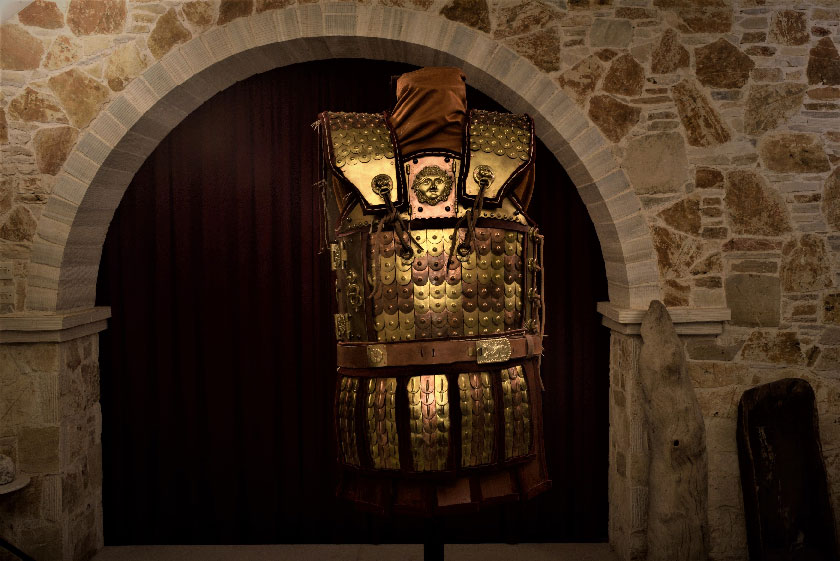 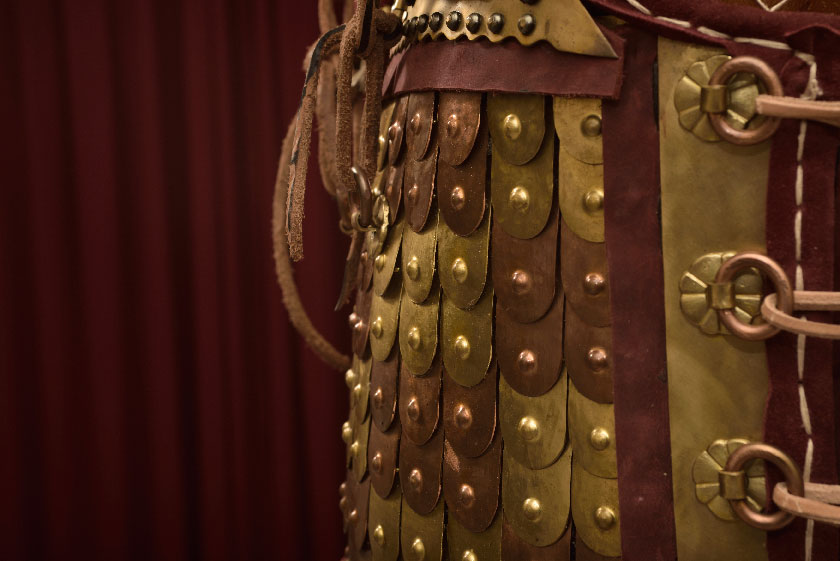 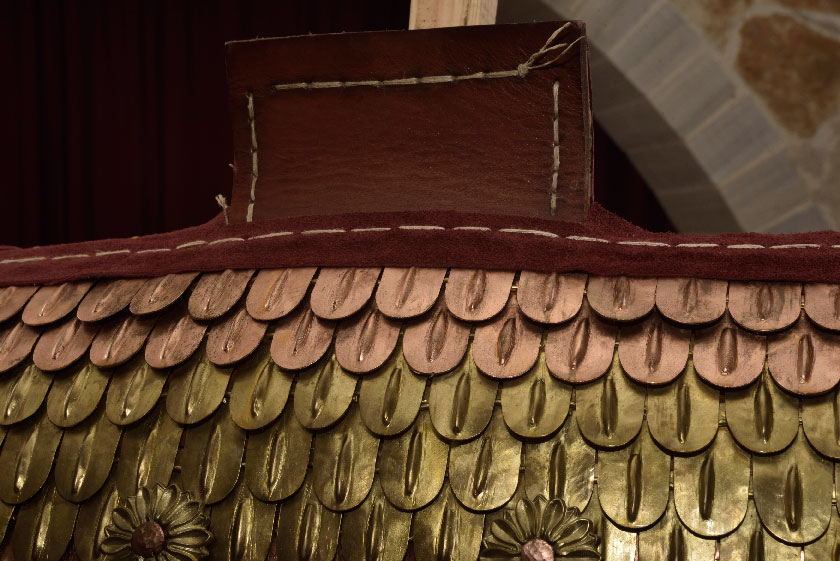 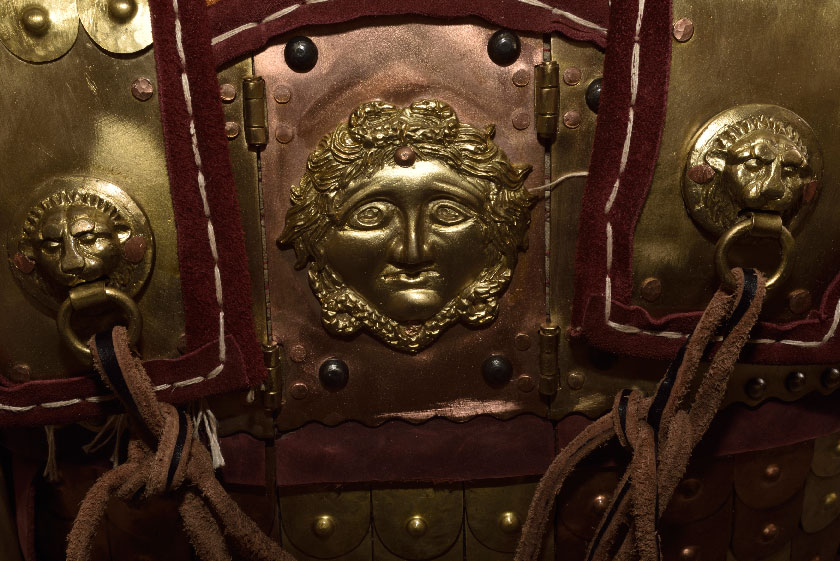 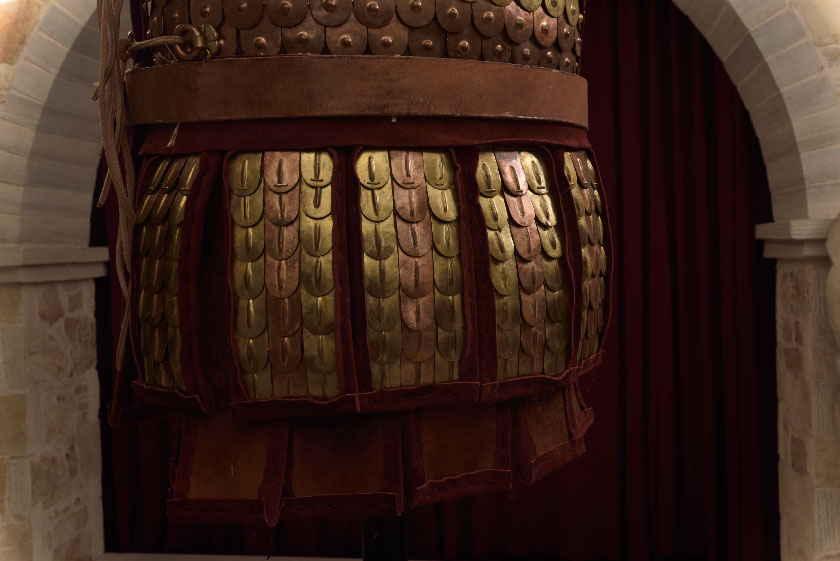 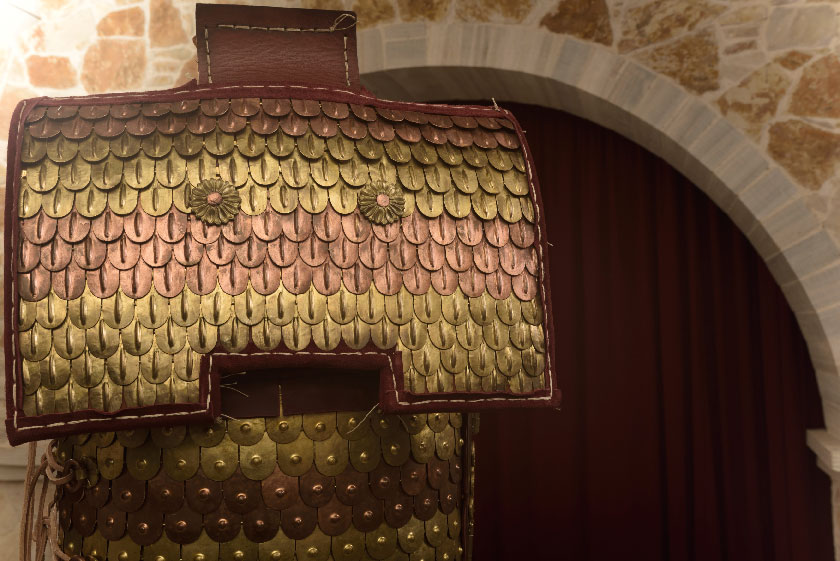 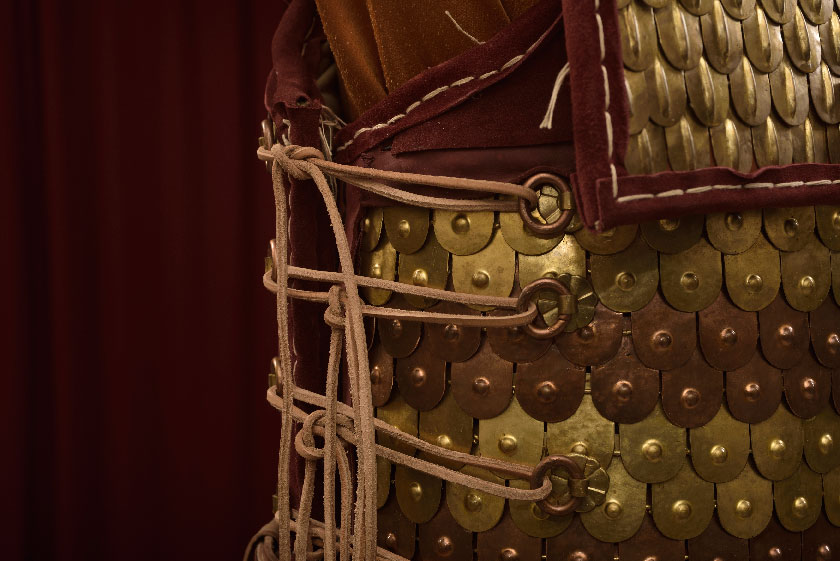 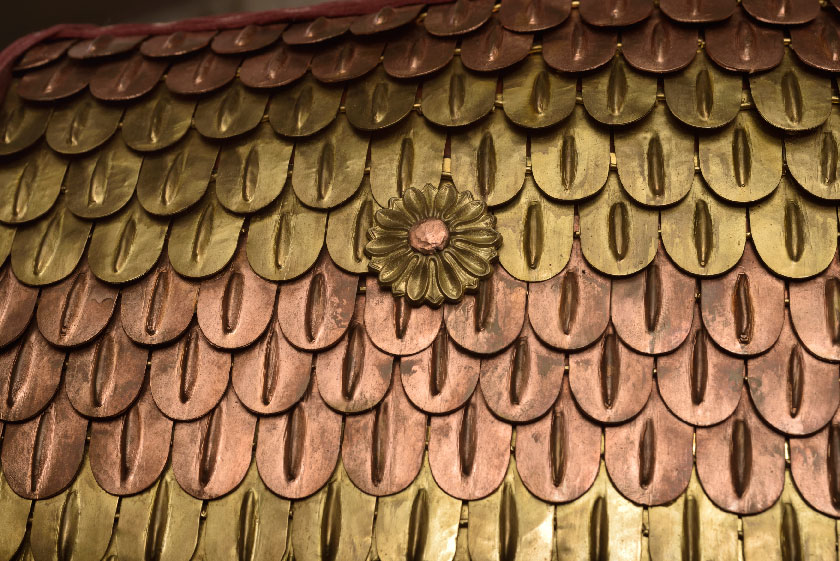 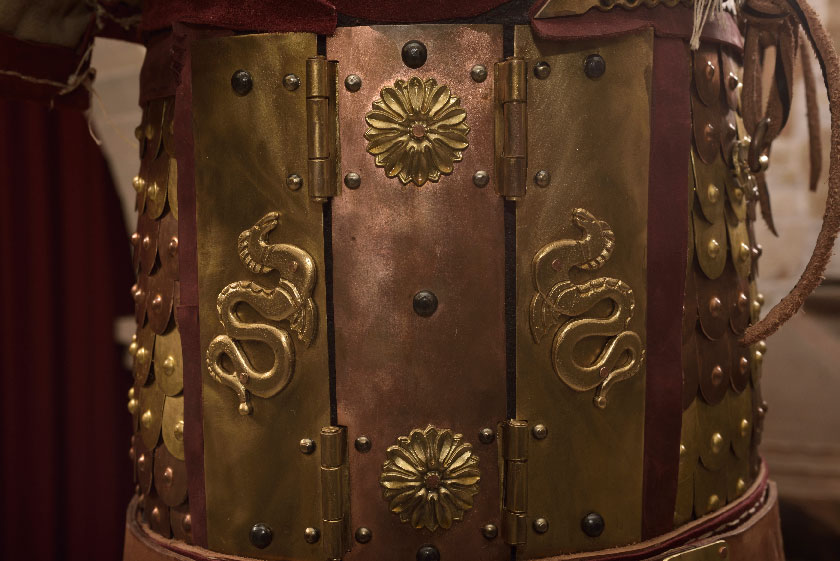 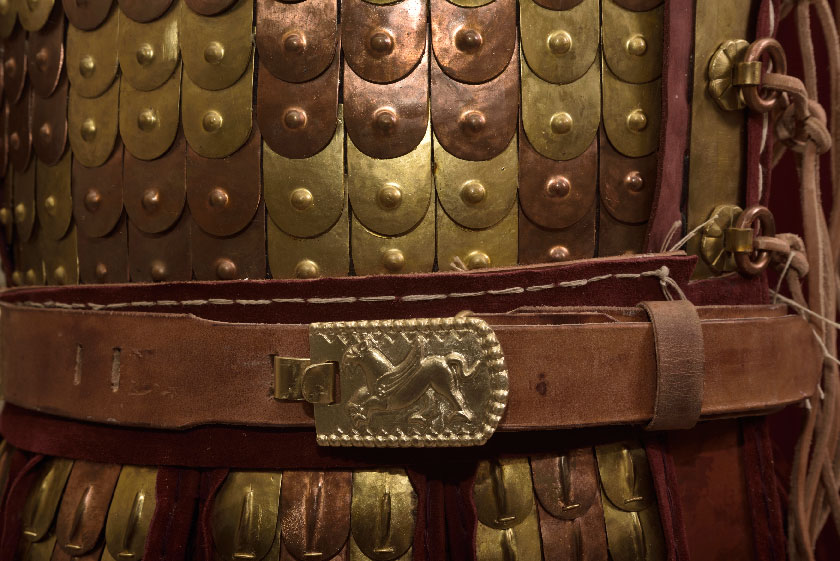 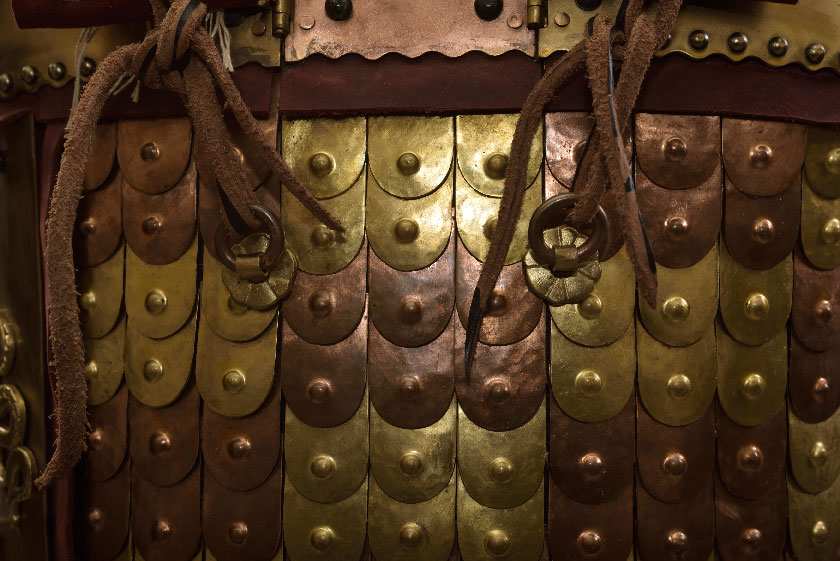 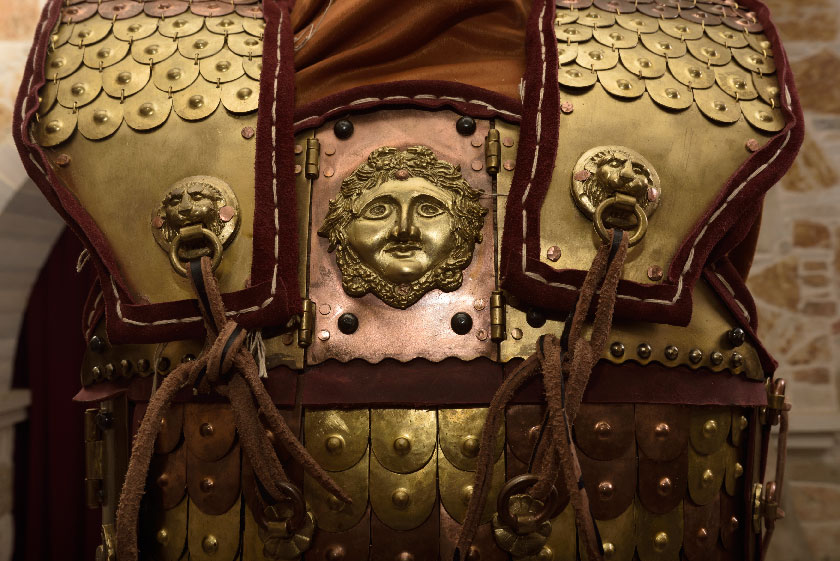 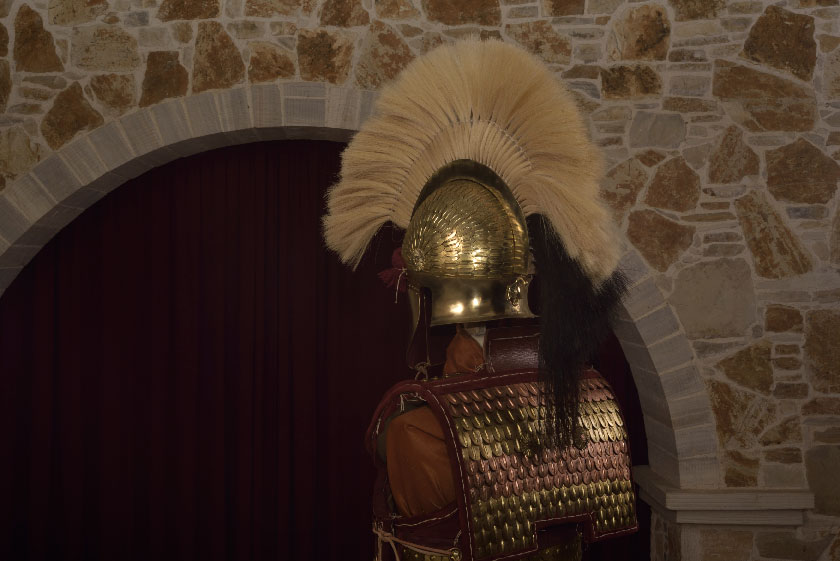 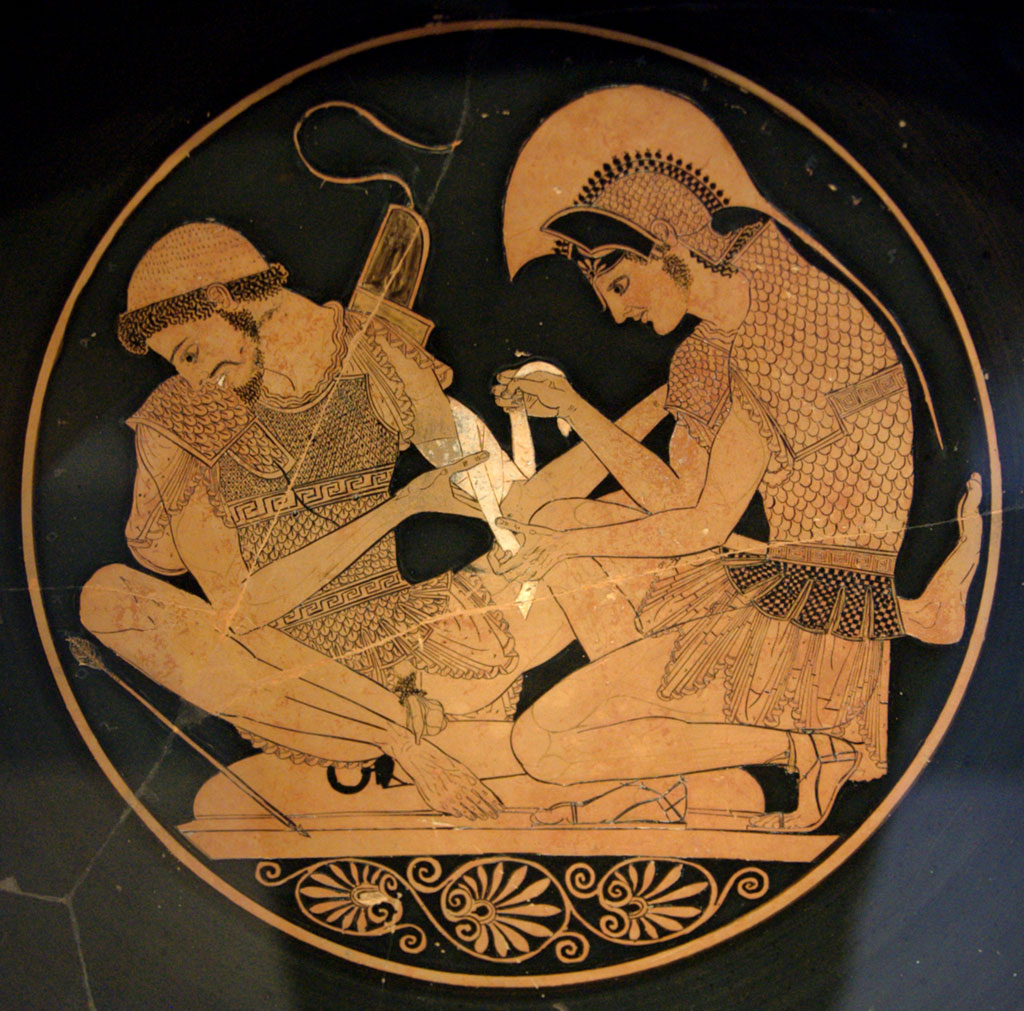 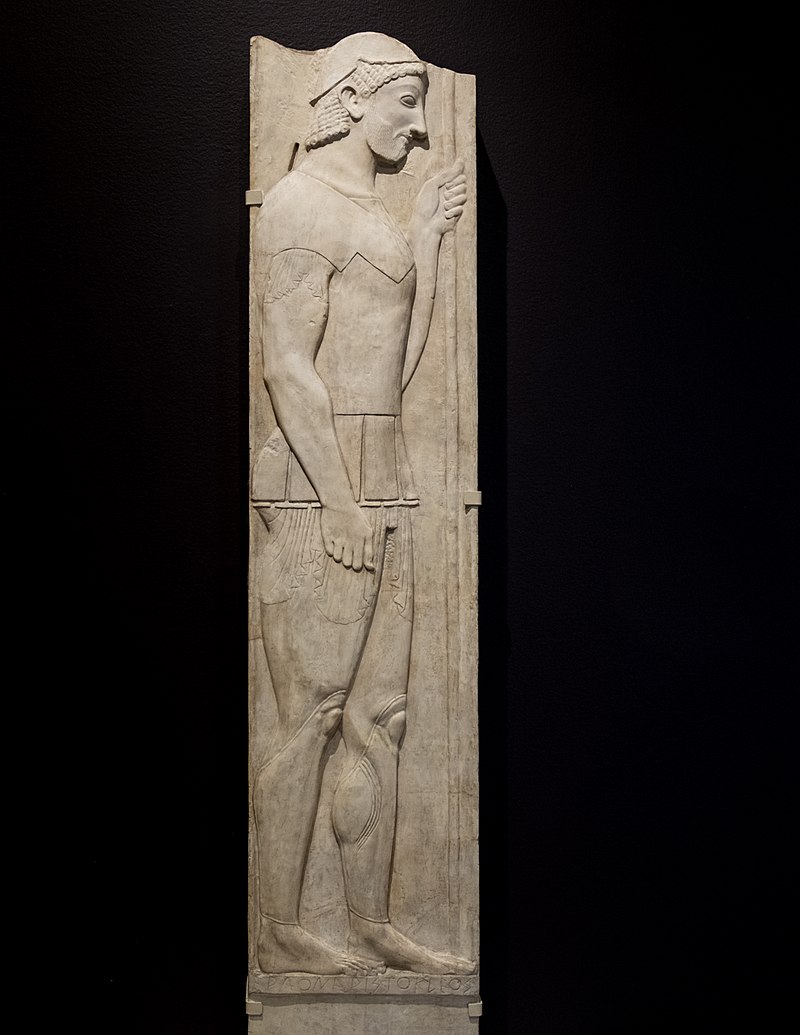 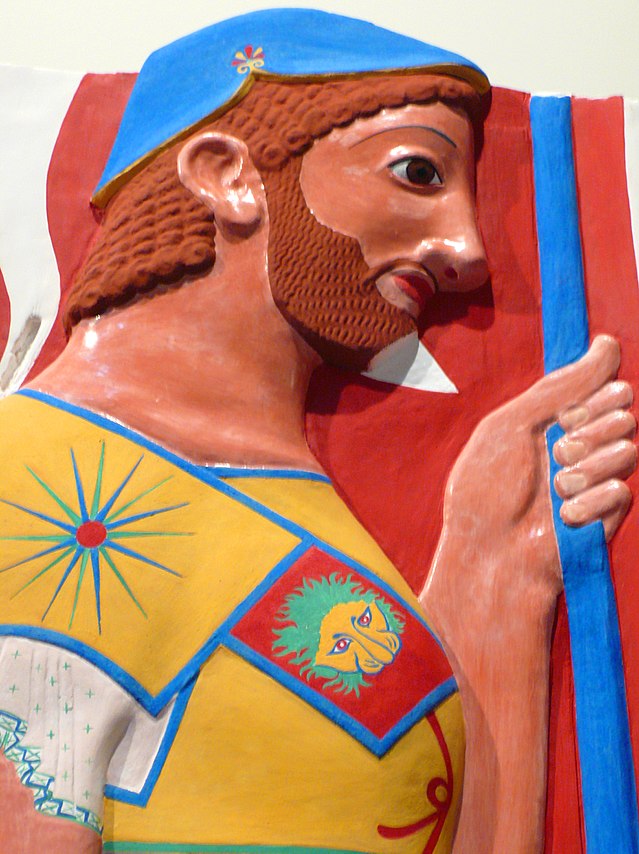